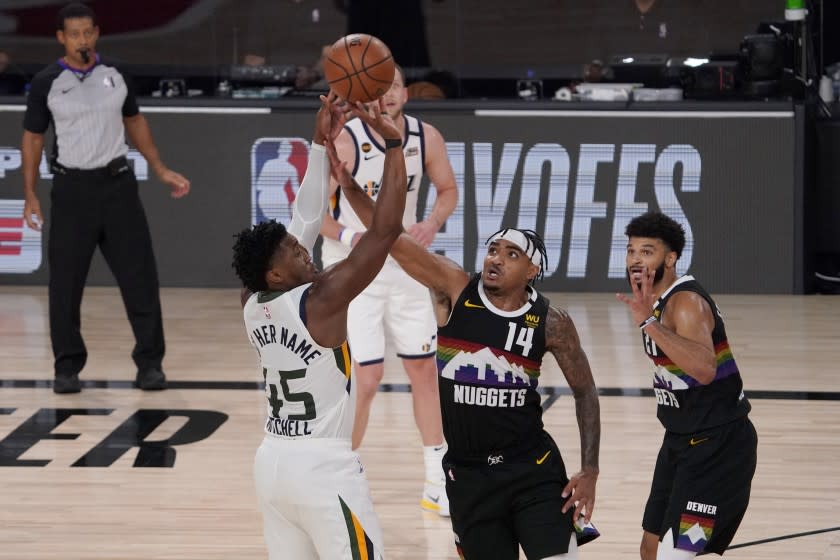 Donovan Mitchell and Jamal Murray dueled for the first six games of the series, two young guards going back and forth on the road to a prime-time Game 7 on national television. But the historic point totals and the unbelievable shots evaporated under the tension of elimination, opening the door for a different player to win the game.

And he made only one of nine shots Tuesday night.

Denver guard Gary Harris, playing in only his second game since the NBA’s shutdown as he worked his way back from a hip strain, snuffed out key possession after key possession, extinguishing Mitchell and anyone else Utah tried to lean on.

After the Nuggets and the Jazz burned through the nets for six games, Denver’s defense — the most important thing it will need in the second round against the Clippers — helped it win 80-78, completing a comeback from a 3-1 series deficit.

They almost certainly don’t without Harris turning in one of the best one-for-nine, four-point, one-assist and two-rebound games in NBA history. And they almost certainly won’t have a shot against the Clippers unless they can play this kind of defense.

The Nuggets looked like they were going to blitz the Jazz, leading by 14 at halftime with the scoreboard not coming close to capturing how they dominated the first half. But led by Mitchell and Rudy Gobert, the Jazz fought back to grab a lead.

But Denver’s clutch defense and a clutch shot from Nikola Jokic, Denver’s best player who got lost in the Murray hype, locked them in. With the score tied, Jokic somehow slithered around and over Gobert with a beautiful, right-handed hook that ended up being the game-winner.

Mitchell finished the series averaging more than 36 points, five rebounds and nearly five assists, cementing him as a true star. But down by two, he couldn’t equal Jokic’s heroics because Harris’ quick hands poked the ball loose.

Malone said it was like Harris knew what Mitchell was going to try, that he could see his sixth-year guard visualizing how he’d stop Utah’s biggest threat in the timeout just before he went out and did it.

But to be clear, Denver wasn’t very good Monday. According to ESPN Stats and Info, its 30 points in the second half are the fewest for any team that’s won a Game 7 since the addition of the shot clock.

And after Harris’ steal, the Nuggets botched a fastbreak in the final seconds, missing a layup instead of pulling the ball out and running the clock. The gaffe gave Utah the ball and opened the door for Mike Conley to take an open three at the buzzer that just missed.

The margins for dopiness will be way tighter against the Clippers, even if Kawhi Leonard and Paul George’s crew hasn’t inspired a ton of confidence after an uneven six-game series with Dallas.

Consider Denver needed Murray — who averaged 18.5 points this season — to score 50, 42 and 50 points in consecutive games to carry their offense and stave off elimination in Games 5 and 6. Whether Patrick Beverley is on the court or not, that type of historic heater will be tough to sustain.

And while Jokic is a treasure offensively, a see-the-court big man with flat-footed, high-arcing shots that you can only technically call “jumpers,” he’s not a rim protector and shouldn’t shoo away any Clippers in the paint.

If the Nuggets have a chance, it’s because of Harris, Paul Millsap, Jerami Grant and Torey Craig — role-playing defenders who give Malone options to try to contain Leonard and George. Of the four, Harris might be the best provided he can physically handle it.

“The reason I have such an affinity for Gary Harris is because I feel he’s one of the better two-way players in the NBA,” Malone said.

On Tuesday, Harris most definitely was only a one-way player. And it won the Nuggets the series. But against the Clippers, they’re going to need more. And they’ll have to find it quickly.