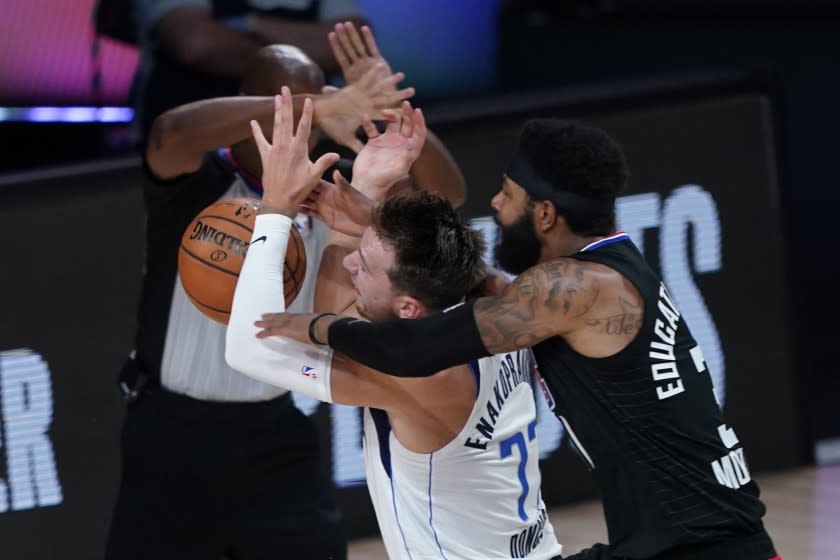 Rick Carlisle was sure of it. NBA vet — and noted pest — J.J. Barea happily yelled “bye bye.” And Luka Doncic, maybe the future face of the league, got up and was ready to fight.

But for Marcus Morris, it wasn’t anything special. He was, for better or worse, being himself.

“I just think it is what it is,” Morris said after the Clippers’ win Sunday. “Something that can be taken in different ways.”

To Dallas, Morris sneakily provoked Kristaps Porzingis into a second technical foul in Game 1, getting the big man ejected. And during Game 5, he seemingly attacked Doncic’s injured ankle — sliding under him on a jumper and stepping on the back of his foot on another play. And if there were any questions of intent, Morris answered them in the first quarter Sunday when he sent Doncic to the floor after a hard shot to the head.

Officials reviewed the play and ejected Morris with a flagrant type 2 foul.

“It was a terrible play. What can I say? It’s two games in a row he did something like that,” Doncic said. “I really hoped the first game it wasn’t on purpose, but looking back on the foul this game, you know what I think. I don’t want to deal with that kind of player — just move on.”

But here’s the thing: Morris is exactly the kind of player Doncic should want to deal with — as teammates. The Clippers attacked the second-year star like a hockey scorer without an enforcer — knocking him to the ground, talking tons of trash and attacking him while he tried to defend. How much did Dallas miss a player like Morris? When Doncic got knocked down and got up ready to fight, the first player he saw was Boban Marjanovic — the biggest player on court and maybe the nicest person in the entire league.

Had that been Paul George or Kawhi Leonard on the wrong end of an overhead chop, you could bet that Morris would’ve been in the fight. The Clippers know it too. As Morris explained his actions after Sunday’s game — no apologizing — Lou Williams walked by and yelled “Keep it gangsta.”

And his contributions extended beyond the physical (maybe worse) play. After uneven performances over his first 14 games with the Clippers (a stretch that included his first two seeding games in the bubble), Morris has settled in as a perfect complement to the Clippers’ stars.

Against the Mavericks, he averaged nearly 13 points a game, his team outscoring Dallas by 63 points while he was on the court in the six-game series. Morris and coach Doc Rivers said they thought the ejection was unwarranted.

It’s unknown whether Morris will face further punishment such as a fine or a suspension.

That Morris got caught up in a physical moment wasn’t a surprise. That his absence ended up not being a factor was a bit of a shock. The Clippers already know they’ll be without Morris at some point later in the playoffs when he leaves the bubble to attend the birth of his child.

Before then, the Clippers need him on the court, doing the things that frustrated the Mavs and that helped push the Clippers.

It’s a line Morris will need to walk — the one that runs between “dirty” and “intimidating,” the one that separates effectiveness and ejections.

“I love Marcus’s intensity,” Rivers said. “Yeah, he’s a tough guy. He’s not backing down, and I love that.”