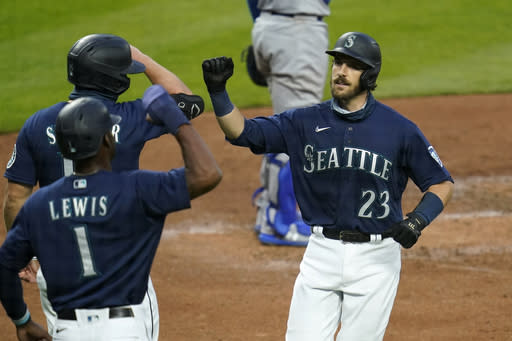 Seattle sent Nola and right-handed relievers Austin Adams and Dan Altavilla to the Padres, while Trammell led a list of youngsters headed back to the Mariners. Also going to Seattle is infielder Ty France, catcher Luis Torres and reliever Andres Munoz.

Nola has the versatility to play several positions. He played first, second and third base, and both corner outfield positions last season for Seattle. This season, Nola has started 23 games behind the plate and two at first base.

Nola is hitting .306 with five home runs and 19 RBIs in 29 games, and his defense behind the plate has been praised by Seattle manager Scott Servais after Nola came up through the minors as a middle infielder. He’s the older brother of Phillies ace Aaron Nola.

Altavilla has been part of Seattle’s bullpen since 2016 but has appeared in more than 22 games only once. This season, Altavilla is 1-2 with a 7.71 ERA in 13 appearances.

Adams has not pitched this season while still recovering after tearing his ACL last September. Adams took part in the early stages of Seattle’s summer camp, but the team admitted he was pushed a little too soon and wanted to wait until he was fully recovered.

Trammell is ranked as the No. 4 prospect in the Padres organization, while Munoz – who was considered San Diego’s closer of the future before undergoing Tommy John surgery in March – made his debut in the majors last season.

”We are excited to add four talented players to the Mariners organization, all of whom are playing in their age-25 or younger seasons,” Seattle general manager Jerry Dipoto said in a statement.

It’s a massive haul for Seattle and adds another piece to a future group of outfielders that could help the Mariners end their playoff drought. Trammell joins a group that includes current center fielder Kyle Lewis and top prospects Jarred Kelenic and Julio Rodriguez, all of whom should be in the majors in the next two years.

Trammell was traded from Cincinnati to San Diego last year at the trade deadline.

Munoz appeared in 22 games last season for the Padres and was regularly clocked above 100 mph with his fastball. He had a 3.91 ERA in 22 appearances.

France has appeared in 20 games this season for the Padres and is hitting .309 with two home runs and 10 RBIs and can play both corner infield positions.

Castro will be a free agent this winter after agreeing to a $6.85 million, one-year deal with the Angels in January. The 33-year-old batted .192 with two homers and six RBIs over his 18 games with Los Angeles, but the longtime Astros and Twins backstop is a strong defensive catcher and normally a solid hitter who has produced at least 10 homers in six seasons of his career.