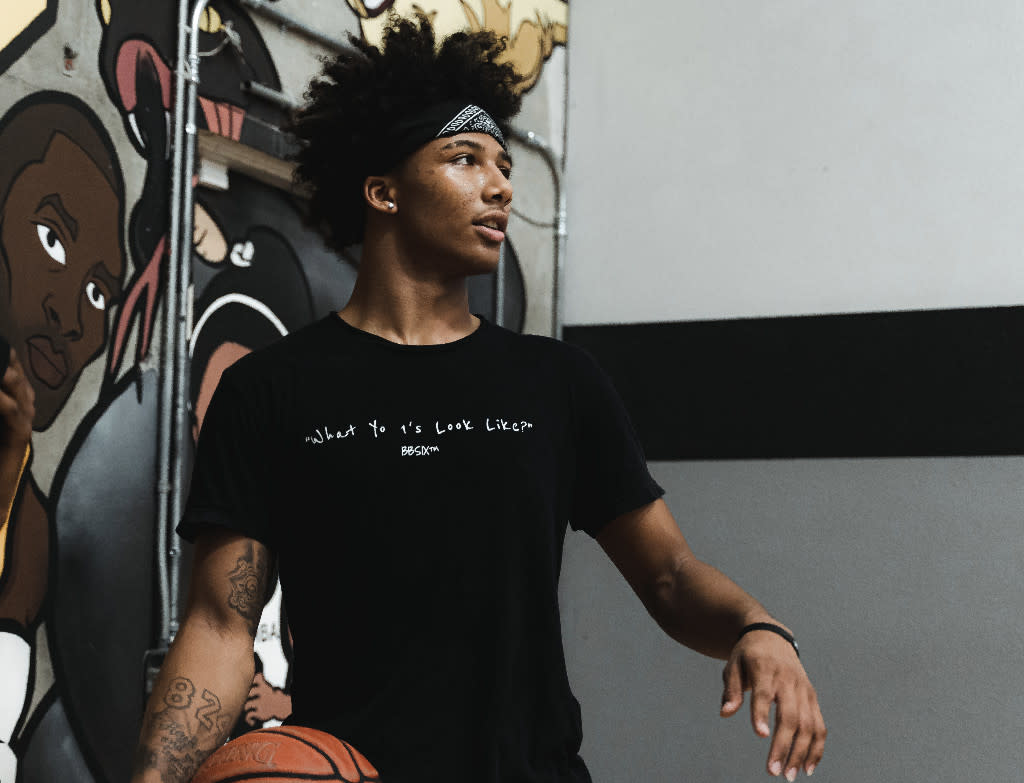 At 5:58 p.m. on a Thursday evening, a text comes through on trainer Ryan Razooky’s phone. “Can we go at 9?” The sender is Mikey Williams, one of the top high school players in the country. Razooky responded with the same answer he’s been giving Williams since early March when gyms closed due to COVID-19: “No problem.”

“We pulled up the first time and I was thinking it was the big building next door, and when I walked in I thought, ‘How is there a gym inside this little building?’” Williams told Yahoo Sports. “It’s a small space, but you can work with it.”

The gym is a 40-foot-by-20-foot space. That’s smaller than a half-court. There are four hoops spaced out on three walls with 3-point lines marked for high school and college range. The ceiling is high but Williams has still managed to break two lights after a couple of hard dunks bounced off the back rim and sailed high into the air, hitting the hanging fluorescent lights.

A typical workout now consists of five to eight teammates piling into the gym for two hours. Temperatures are checked at the door and hand sanitizer is given to players and staff. Things are slowly starting to open up with strict guidelines, but back in March it was only Williams, his younger brother, Marvin, and a couple teammates who were allowed in the gym.

Public gyms like LA Fitness, 24 Hour Fitness and the YMCA are still closed in San Diego. Even Williams’ high school team, San Ysidro, can’t access the gym on campus and has to practice outside at a nearby park. The small warehouse that Razooky bought a year and a half ago has become a second home to Williams and his teammates during a time when basketball was essentially shut down for four months.

“I remember a time during quarantine when there was a two-week run where I was coming in here at seven in the morning and then again at 10 at night just getting shots up and working,” Williams said.

Williams, 16, doesn’t have his license yet and depends on rides from high school coach Terry Tucker, his parents or friends. There have even been a few occasions when Tucker’s son, Tyler, will drive up from Mexico, where he lives, to take Williams to a workout. That sometimes consists of waiting in the line to cross the border for two or three hours before picking up Williams and his teammates just to drive them to a workout. Razooky’s gym is a 30-minute ride from Williams’ house in San Ysidro, and workout times change depending on the ride situation.

“In the beginning it was kind of a mess,” Razooky said while laughing. “But people forget that Mikey is still just a high school kid, and if he doesn’t have a ride, then I’m going to adjust my schedule to make it work for him.”

After consistently being in the gym for a few months, clips started to emerge online of this unique gym where top players like Williams, Bryce Griggs and Jahzare Jackson have been working out. Razooky already had a decent following on Instagram with 100,000 followers, but that number quickly doubled once fans figured out he was the one training Williams during quarantine.

“When you’re with those guys all the time and working out with them, people will start to take notice,” Razooky said. “I have all these kids following me now because I’m in the gym with their favorite player. It got to a point where I had to take my business phone number off Google because I was getting so many calls and fans were starting to come by and see if Mikey was in the gym.”

Williams recalls only one time when a fan was waiting outside the gym for an autograph. Every other time he’s free to come and go as he pleases like any other kid leaving a workout.

The time Williams has put in at Razooky’s gym during quarantine paid off in a big way when he took a month-long trip to North Carolina and Atlanta starting in July to visit family and play in some local tournaments. The incoming sophomore also took an unofficial visit to Tennessee State, an HBCU.

“It was dope. It was super hot but they showed us around and gave us a nice tour. I had a great time,” Williams said about the visit.

It’s a far cry from the Duke, Kentucky, North Carolina and Kansas visits most top players take but Williams isn’t impressed with flashy campuses and brand-new training facilities. “All I need is a gym and a place to sleep and I’m good to go,” Williams said while shrugging.

The five-star prospect rocked the recruiting world with one tweet back in June when he said, “Going to an HBCU wouldn’t be too bad…” Almost every HBCU school was quick to offer in the days that followed and Williams now has four HBCU schools in his top 10, including NC Central, Hampton University (where his mom went to school), Alabama State and Texas Southern.

“Why does it always have to be the big names?” Williams said in an Instagram post. “Have you ever thought about helping your own people out? We are the reason that these schools have such big names and such good history. But in the end, what do we get out of it?”

An HBCU school is definitely a viable option for Williams but so is the pro route with the new G League Select Team. Top players like Jalen Green, Jonathan Kuminga and Isaiah Todd all decided to forgo college and joined the inaugural G League team this year. Being a sophomore, Williams still has plenty of time to make a decision but will be watching the development of the program closely.

“I’ll still be watching the G League super close. Especially now that it’s an option for us to either go to college, the G league or overseas route.” Williams said. “I think it’s great that a lot of players don’t have to go overseas and they can stay home. I’m definitely going to be watching what they do this year with guys like Jalen and Jon Kuminga.”

Williams still has three years of high school basketball left and a lot of time before a decision needs to be made. That means hundreds of more hours spent at Razooky’s gym getting reps with his teammates and possibly breaking a few more lights.

As it neared midnight after one of his workouts at Hoop House recently, Williams checked his phone and changed his shoes. Razooky asked him when he wanted to get back in the gym. “Can we go again tomorrow?” Williams asks. It’s the same question Razooky has been getting for the last five months.