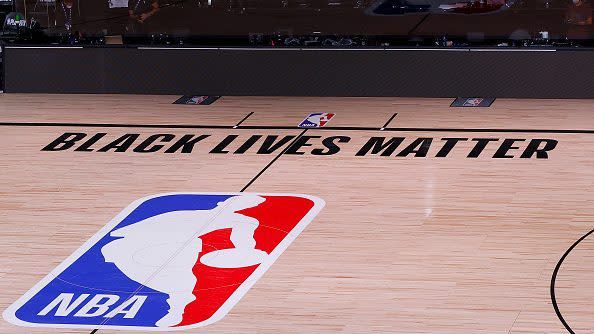 It was one of the signature steps by the league to support players in their push for social justice: It would say “Black Lives Matter” right on the court for every game in the restarted NBA in Orlando.

ESPN’s Adrian Wojnarowski said on his own podcast, The Woj Pod, that several owners did not want the BLM words on the court, although none of that would knock the idea publicly. (Hat tip Bleacher Report.)

“Not every owner in the NBA was enthusiastic about having ‘Black Lives Matter’ on the court. I know they all weren’t. Some are extremely supportive. Some less so. None of them publicly [critical].

“But I do know Adam Silver told them, ‘Hey guys, this is what we’re going to do to support our players. Our league is overwhelmingly comprised of African American players. This is important. This is a partnership. We need to work together to get through this season and into next year.”

It’s not a surprise that some of the rich, white, largely Republican team owners would oppose the Black Lives Matter words on the court. What’s more impressive is the consensus-building Adam Silver went a little David Stern and told the owners how it would be.

How some of the owners will react to the more concrete steps the players have pushed for — police reform in cities, voting rights — will be interesting. That would have a lot more impact than words on a court.