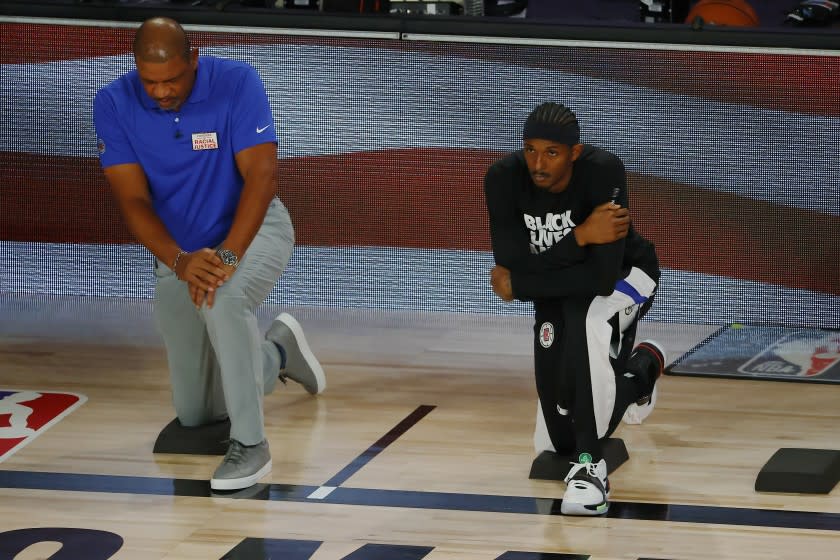 The NBA gained an element of certainty Thursday when players voted to resume the postseason after a two-day stoppage, but the day ended with unresolved questions about how it will navigate what is sure to be an emotional transition from a renewed focus on racial injustice back to the business of basketball.

Though the league said Thursday afternoon that it was “hopeful to resume games either Friday or Saturday,” it provided no further update on when Wednesday and Thursday’s six postponed playoff games will be rescheduled.

In the interim teams are operating in a state of limbo, unsure exactly when to refocus on basketball or how much preparation they will have to do so. By Thursday afternoon, one public relations official from the Dallas Mavericks advised media members that the team was still awaiting information from the league about the timing of its next practice and game.

Teams used Thursday as a chance to unwind away from the court after a chaotic 24 hours. The Milwaukee Bucks refused to play their playoff game against Orlando on Wednesday as a response to the shooting of Jacob Blake, a Black man shot seven times in the back by police in Kenosha, Wis. Hours later, players from 13 teams discussed next steps in a long, late-night meeting that often turned emotional, according to people briefed on the discussions.

After speaking at the meeting at the request of ex-Clipper and current Oklahoma City guard Chris Paul, and conferring with his players, Clippers coach Doc Rivers said he sensed an eagerness to continue discussing social justice initiatives while finishing the season.

“They are really looking forward to it,” Rivers told Fox Sports Prime Ticket. “Yesterday it was a very difficult day though. Like, their emotions were all over the place. They thought it was over. It was just a really tough day for all of them.

“But I tell Lou [Williams] this, this afternoon he was in my room just talking, ‘Man, what a good tough day.’ And he was like, ‘What the heck is that? What’s a good tough day?’ And I said you had one yesterday. Some day you will look back on this and you will understand that.”

Around the NBA, numerous observers agreed that the games themselves remain far down the list of priorities for many living inside the league’s Disney World campus near Orlando, Fla. But by the weekend, teams will nonetheless be expected to turn their attention toward matchups and strategy.

Though the challenges of living inside a closed campus for months were discussed often before teams arrived at Disney last month, the effect the isolation has had on players and their performance has come under the spotlight in recent days. After a 154-111 Clippers victory in Game 5 on Tuesday, forward Paul George told reporters that he had spoken with a team psychiatrist amid a three-game shooting slump earlier in the series after feeling anxious and depressed.

Rivers told Prime Ticket that Wednesday’s meeting “woke me up quite a bit” to the scope of similar challenges being felt by all players.

“I knew it was hard but listening to some of these guys speak, just mental awareness, we got to be a little sharper on that as well,” Rivers said. “Because I don’t think it’s coincidence that everyone in this bubble just seems to be a little bit more emotional and I’m not kidding. It’s true. I think part of the effect of being like jammed together every day, it has had that effect on everyone.”