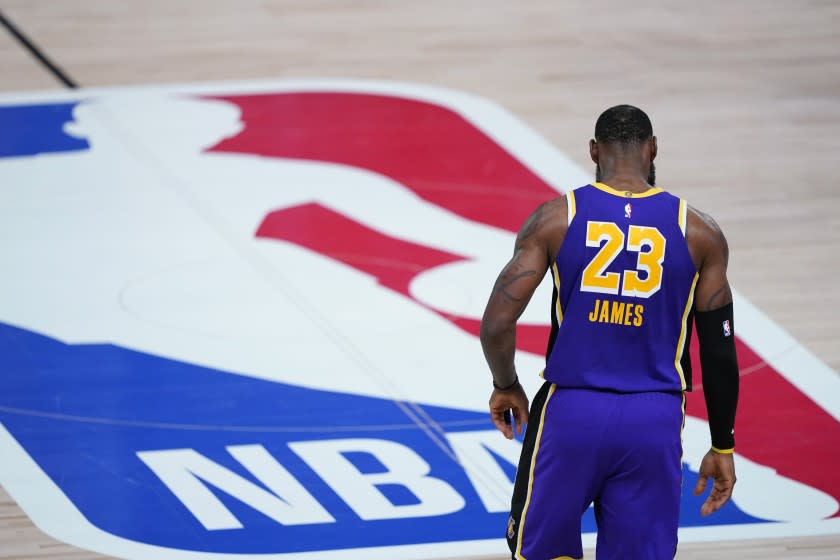 When finally his anger boiled over, LeBron James decided to get up and leave before the meeting was over. With him went Lakers teammates.

James, who prides himself on well-planned activism, had enough with the indecision. He was ready to stop the season. Still, there were those on his team who wanted to keep playing, who needed the season to continue with an eye on their future.

By Thursday morning, most of the Lakers were in agreement: they wanted to finish the season.

“LeBron’s emotions got the best of him yesterday and today he calmed down,” a person familiar with the meetings said. “He talked to a lot of different people. Yeah, he changed his mind about playing, but he was always for what everyone else wanted to do, whatever the majority was. It wasn’t until what Milwaukee had going on that kind of sent him over.”

The Bucks didn’t tell anyone in advance they had decided to not play Game 5 of their first-round playoff series against the Orlando Magic.

That decision came moments before the game was scheduled to start, after some of them were in full uniform. And it caught the Magic and all of the other teams off guard. .

After three hours of deliberation at the arena, behind a door with a temporary sign bearing the image of a deer, the Bucks emerged together. In a cold, concrete hallway they stood somberly in front of a group of about 10 reporters to explain why they could not focus on basketball.

They explained that a police officer in Kenosha, Wis., shooting Jacob Blake in the back seven times, and a teenager fatally shooting two protesters, had escalated the American crisis to a point where they had to stop. Kenosha is only 40 miles from Milwaukee and they felt the weight of responsibility. George Hill and Sterling Brown read a statement to reporters demanding that the Wisconsin state legislature call a special session and hold police accountable.

The Bucks were grappling more urgently with what had been on many players’ minds before they arrived at Orlando.

In the weeks before teams entered the bubble, several players expressed concerns about resuming the season. Some worried that the momentum building around the country by protests against racism and police brutality would fade.

On May 25, a Minneapolis police officer knelt on the neck of George Floyd for nearly nine minutes. The incident, which led to his death, was captured on video and protests erupted around the country in its aftermath.

Floyd’s death came at a time when two other unarmed Black people — Ahmaud Arbery in Georgia and Breonna Taylor in Kentucky were killed.

“I think for us, the only benefit of us not playing is to keep the focus on the fight,” Clippers guard Lou Williams said in June. “… In six weeks the world may need some healing, they may need us to be on the floor. But if more Black kids or more Black adults or any adults that’s dealing with police brutality are getting killed and we’re still outraged, I don’t know if it’s in our best interests to suit up because it looks like we don’t care.”

Williams ultimately decided to join his team, as did Dwight Howard of the Lakers after he, too, expressed concern.

When they arrived, they vowed to keep talking about racism and police brutality, and they did. Lakers guard Danny Green started every news conference reminding people that he was still seeking “justice for Breonna Taylor.” Lakers forward Kyle Kuzma opened a news conference on Monday with a message for Jacob Blake’s family: that the players in the bubble would try to help them in any way they could.

James talked powerfully about the pain that came with seeing the video of Blake being shot.

“We are scared as Black people in America,” James said. “Black men, Black women, Black kids, we are terrified.”

At dusk on Wednesday, with the moon glowing brighter each minute, teams began arriving to the convention center.

Portland, Orlando, Houston, Oklahoma City and Dallas — the five teams staying at the Grand Floridian Hotel — arrived by bus. The remaining eight teams could walk over if they wanted, through carpeted hallways with southwestern designs.

Just after 8 p.m. the meeting began. Coaches were invited to join the players for a short time but were then asked to leave.  Clippers coach Doc Rivers spoke briefly.

“I didn’t really even want to talk; I thought it should be a players thing but [Chris Paul] really urged me to just say something so I did,” Rivers said during a broadcast Thursday on Fox.

The meeting was contentious at times, with anger and frustration expressed by many. Clippers star Kawhi Leonard said forcefully that he didn’t want to keep playing. Teammate Patrick Beverley became upset.

Many players demanded answers from the Bucks about why they blindsided everyone. Celtics star Jaylen Brown reportedly rose to their defense.

It was their sudden willingness to not play a game without a fully formed plan for what to do next that irked many, including James. Especially after Milwaukee players made it known that they wanted to continue the season.

“We’re dealing with crazy videos, being in this bubble,” a person familiar with the meeting said. “It’s a lot of stuff we’re going through right now. Emotions are high. Milwaukee sitting out and not letting anybody know, then they want to play and that flip-flop.

“The whole thing is, what if it happens again, someone else gets shot in L.A., are we not going to play? Or in Utah, or Portland.”

The meeting resolved nothing and James left, exasperated, along with teammates supporting his decision. Later that evening, the Lakers met for dinner and emotions began to cool. Chris Paul, a guard for the Oklahoma City Thunder and president of the National Basketball Players Assn., told James another meeting was planned for 11 a.m. on Thursday, and the Lakers agreed to join.

After a night’s sleep, the Lakers met again as a team. Players from other teams filed into the general meeting space late Thursday morning and waited for the Lakers to join them.

Howard and Lakers guard Rajon Rondo, who is from Louisville, Ky., where Taylor was killed, had been the two most prominent players in favor of not finishing the season. That group felt they would better serve the community on the front lines.

But more of them wanted to play with so much on the line financially and the ability to continue having a platform to speak; not to mention the chance to win a championship

Together, they moved forward in support of continuing the season. But that was not the end of the discussion. The calls and meetings continued throughout the day. Thursday evening, James spoke on a conference call with team owners to insist owners dedicate themselves to helping solve these issues.

Saturday, the games are expected to resume. The discussions are ongoing.