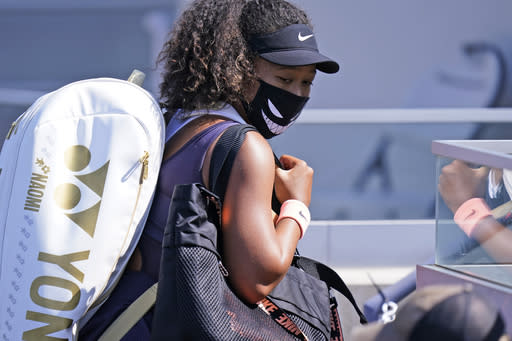 NEW YORK (AP) — Fourth-seeded Naomi Osaka reached the semifinals of the Western & Southern Open on Wednesday and withdrew a few hours later in a call for racial justice, drawing quick support from other players. Soon after, the whole tournament was put on hold for a day.

”As a sport, tennis is collectively taking a stance against racial inequality and social injustice that once again has been thrust to the forefront in the United States. The USTA, ATP Tour, and WTA have decided to recognize this moment in time by pausing tournament play at the Western & Southern Open on Thursday, Aug. 27,” the three oganizations said in a statement.

Osaka, the Japanese star and last Top 10 seed in the women’s bracket, joined professional athletes in basketball, baseball and soccer in demanding change after Jacob Blake was shot by police.

Osaka tweeted that as a Black woman, she feels compelled to pull out of the tournament to put a focus on police shooting Black people.

”I don’t expect anything drastic to happen with me not playing, but if I can get a conversation started in a majority white sport I consider that a step in the right direction,” Osaka tweeted. ”Watching the continued genocide of Black people at the hand of the police is honestly making me sick to my stomach.

”I’m exhausted of having a new hashtag pop up every few days and I’m extremely tired of having this same conversation over and over again. When will it ever be enough?”

Her move quickly got support from others players on the tour.

Sloane Stephens retweeted the message and added: ”Say it louder! Proud of you” and in a separate tweet added, (hash)Proud of all the sports teams and athletes taking a stand tonight (hash)BLM”

After reaching the semifinals late Wednesday, Milos Raonic said the ATP and WTA should consider a joint action that goes beyond a small group of players.

”I think real disruption, that’s what makes change, and I think a lot of real disruption is caused by affecting people in a monetary way and can force some kind of change,” he said. ”I’m hoping at least we on the men’s tour as well as the women’s, we band together and we show support.”

Osaka beat No. 12 Anett Kontaveit 4-6, 6-2, 7-5 on Wednesday afternoon, reaching the semifinals as the only Top 10 player left in the bracket. Late Wednesday, she was still scheduled to play No. 14 Elise Mertens in the semifinals.

Azarenka, who was No. 1 in 2012, acknowledged Wednesday that she had considered retiring at the start of the year. She’s currently No. 59 but has reached her first semifinal since April 2019.

”In January, I didn’t know if I was going to play at all,” she said. ”So end of January, I decided: You know what? I might try, last time, and see what happens.”

In the men’s bracket, top-ranked Novak Djokovic had no problems with his creaky neck or the swirling winds during a 6-3, 6-1 victory over Jan-Lennard Struff that was by far his best showing of the week.

So far, no rust at all after the long layoff from competitive tennis.

”Everything was worked on in the last six months, I had plenty of time,” Djokovic said. ”I worked on every single thing. It’s great it’s paying off so early after the break.”

Djokovic tested positive for COVID-19 after exhibition matches he organized in Serbia and Croatia in June with no social distancing.

In his match Monday against Ricardas Berankis, Djokovic had his sore neck massaged twice by a trainer during a 7-6 (2), 6-4 victory that included seven double faults. The neck has gotten better, and so has his overall game.

”Right now it’s not a concern,” he said. ”It’s still not 100% but it’s close to that. I’ve been gaining more range in my movement of the neck every single day, so no complaints.”

In the semifinals, he’ll face Roberto Bautista Agut, who knocked out defending champion Daniil Medvedev earlier in the day.

Medvedev failed to close it out in the second set, and Bautista Agut rallied for a 1-6, 6-4, 6-3 victory that eliminated yet another top player out of the tune-up tournament for the U.S. Open. Djokovic is the only player left in the tournament with an ATP Masters 1000 title to his credit.

Medvedev led 4-3 in the second before letting it slip away. He converted only five of 20 break points in the match and swatted his racket against the court in frustration at the end.

”Even in the third set I had my chances and didn’t take them,” Medvedev said.

Bautista Agut reached his third Masters semfinal and his first since 2016. He needed a set to adjust to the breezy, cooler conditions on court.

”It’s never easy to come back and play good at first,” he said. ”I have to be patient, to try to enjoy every single match I play here after six months without competing. Just pleased and happy to be in the semifinals.”

Medvedev hoisted the champion’s Rookwood Pottery cup last year in Mason, Ohio, where the tournament is held annually. This year’s event was moved to the U.S. Open site in Flushing Meadows because of pandemic precautions, creating a two-tournament event without spectators.

Fourth-seeded Stefanos Tsitsipas also advanced to the semifinals when Reilly Opelka withdrew during the first set of their match Wednesday after getting treatment for an injured right knee. He’ll face Raonic, who beat Filip Krajinovic 4-6, 7-6 (2), 7-5.