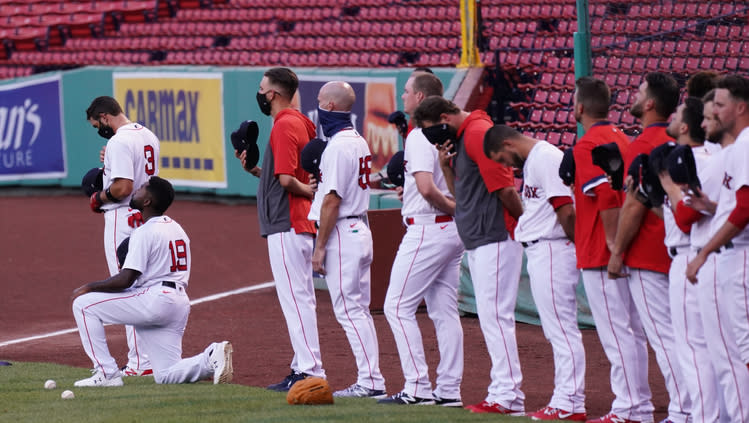 Oh, to be a cyber-fly buzzing about the latest text chain between Mookie Betts and Jackie Bradley Jr.

The two outfielders were lockermates in Fenway Park for parts of six seasons. Bradley called Betts by his given first name of Marcus. Betts never declined an opportunity to gush about Bradley’s skills. At times, they were the only African-Americans on the roster.

By the time the George Floyd protests and Black Lives Matter movement finally forced a long-overdue reckoning on race in America, Betts was gone, sent to the Dodgers. That left Bradley to answer alone, and he handled the issue with his characteristic grace.

“It all boils down to people just have to want that change,” Bradley said last month. “You can’t force it on anybody. We have to show a lot more love in this country.”

It should come as no surprise that with the nation once again roiled by a police shooting — this time Jacob Blake being shot in the back seven times in front of his children in Wisconsin — Bradley finds himself front and center. But much like the cavalryman who charges towards enemy lines only to see his fellow soldiers scattering in retreat, Bradley once again stood alone on Wednesday.

The Red Sox didn’t hold a team meeting about canceling their game against the Blue Jays in Buffalo as a form of protest. They didn’t discuss following the lead of the NBA, which saw its entire slate of playoff games wiped clean, or even the lead of the Celtics, who had made it clear a day earlier that they didn’t know if they’d be able to take the floor for Thursday’s Game 1 against the Raptors.

Instead, Bradley spoke with manager Ron Roenicke and backup catcher Kevin Plawecki. We only know this because a local reporter criticized the team for not consulting him, and Bradley corrected the record to note the two who did — which was effectively even more damning. Just the manager and the second-string catcher. No other teammates. No members of the front office? No one in ownership?

Three thousand miles away, a very different scene unfolded. As the Dodgers prepared for batting practice in San Francisco before playing the Giants, Betts told his teammates that he wouldn’t play. Rather than leave him on an island, they rallied around him — Black, White, and Latino — and reached a decision.

If Mookie’s not playing, none of us are.

Betts, unfairly left to shoulder these burdens with just a handful of minority teammates in Boston, sounded legitimately moved.

Peruse every quote ever uttered by Betts over his six years in Boston, and you won’t find anything close to that one. It always felt like he was holding back his complete disgust over the Jones incident, maintaining a quiet seethe rather than speak an uncomfortable truth.

The team’s White House visit was predictably split along racial lines, with every White player attending and virtually all of the Black and Latino ones staying home. Allies were hard to come by, the victims of racial injustice constantly forced to answer for the misdeeds of the perpetrators.

And in that sense, the Red Sox continue to fail, a contrast made all the more stark by the scene in California, where Betts addressed the media alongside half-Japanese manager Dave Roberts, White starter Clayton Kershaw, and Curacao native Kenley Jansen.

The lack of similarly vocal support for Bradley is simply galling but not remotely surprising. He was asked if it’s difficult to answer these kinds of questions time and time again.

“I have support,” Bradley countered. “It’s not difficult for me to address it. I am the only Black person on this team, so I kind of feel like it’s my responsibility to address it in certain situations, just so people can see what I feel and the things I think about. I can take it on.”

He shouldn’t have to bear that burden alone. It’s hard to imagine Betts regrets leaving Boston and signing long-term in L.A., because the Dodgers showed the power of having a teammates’ back. The Red Sox? They can say what they want, but they’re more comfortable turning theirs.