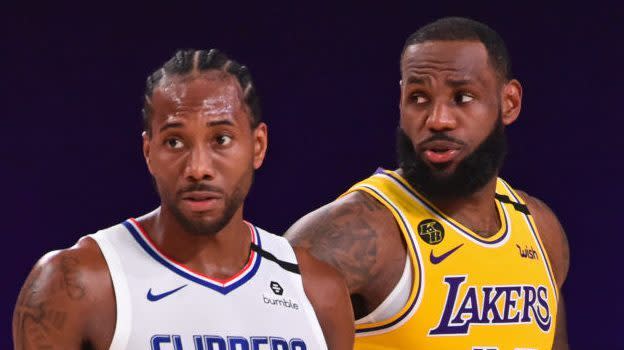 With LeBron James leading the way, the Lakers and Clippers reportedly walked out of Wednesday night’s players’ meeting on the NBA restart campus — but not before voting to cancel the rest of the playoffs.

If they walk out of the NBA bubble, would the NBA playoffs continue?

It’s a question a lot of people are asking after LeBron James and the usually-quiet Kawhi Leonard spoke at the meeting — sparked by the Bucks’ decision to boycott their playoff game Wednesday — and both were “adamant” that the players continue the boycott and cancel the rest of the season, reports Brad Turner of the Los Angeles Times.

Sources: Lakers forward LeBron James and Clippers forward Kawhi Leonard both spoke up in the players meeting Wednesday night and were adamant about not playing the rest of the playoffs and they wanted change. The players will have another meeting at 11 am East time Thursday.

The players are meeting again on Thursday at 11 a.m. — not coincidentally at the same time the NBA owners are having their own virtual meeting. Between those meetings, the fate of the NBA season will be decided.

We know what LeBron James and Kawhi Leonard want. LeBron has wanted to see action on social justice issues, that’s why he started “More Than a Vote” with other athletes, to put money and effort towards getting out the vote and combating voter suppression tactics.

In the wake of the shooting of Jacob Blake in Wisconsin, which shook the NBA bubble, LeBron, Leonard, and many other players want to see owners putting their money and political clout toward the issues they care about, such as police reform.

LeBron and Leonard are also in a financial position not to be hurt dramatically by a lockout next season — something that would almost certainly happen if the playoffs are canceled. The Los Angeles superstars can afford to be adamant. Many other players do not feel the same way.