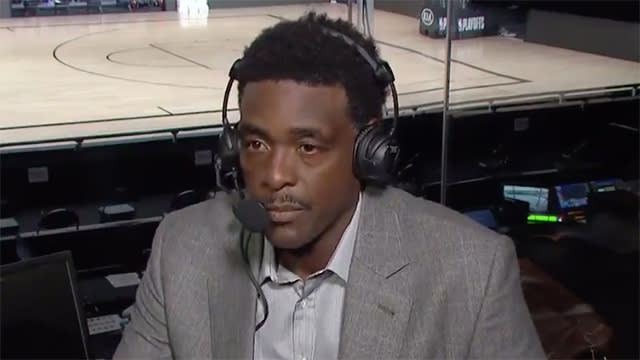 There are parts of the day-to-day rhythm during the NBA playoffs that we take for granted, whether it’s checking in-game box scores or flipping between close games.

That was all shaken Wednesday night when players decided to strike and not play any of that evening’s scheduled postseason games. Bucks players called for justice in the case of Jacob Blake, a 29-year-old Black man shot by police seven times on Sunday who is now paralyzed from the waist down. They also demanded for the Wisconsin state legislature to reconvene and make substantive changes to address criminal justice reform and police brutality.

Another jarring, powerful scene Wednesday was Kenny Smith walking off the NBA on TNT set.

“As a Black man, as a former player, I think it’s best for me to support the players and just not be here tonight,” he said.

Instead of calling a game, former Sixer Chris Webber reflected on feelings of pain and futility, as well as his support for the players’ activism, in a message worth listening to.

“If not now, when?” Webber said. “If not during a pandemic and countless lives being lost – if not now, when? … We understand it’s not going to end. But that does not mean, young men, that you do not do anything. Don’t listen to these people telling you ‘Don’t do anything, because it’s not going to end right away.’ You are starting something for the next generation and the next generation to take over.

“It is the young people leading the way and I applaud them.” @realchriswebber delivers a powerful message in support of the NBA players. pic.twitter.com/KVCUINw8Vx