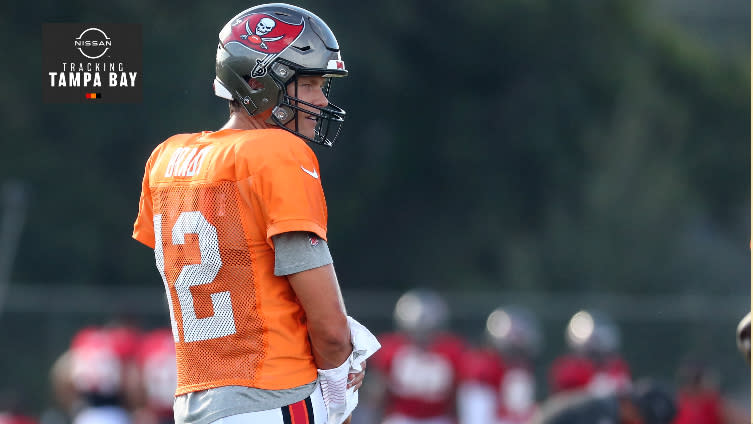 To no one’s surprise, it didn’t take long for Tom Brady to impress his new Tampa Bay Buccaneers teammates in camp.

Not only has the ex-New England Patriots quarterback shown he’s still got it at 43 years of age, but he’s also carried his unmatched leadership ability with him from Foxboro to Florida.

Bucs tight end Cameron Brate described what he’s noticed about Brady’s personality in practice and raved about what he’s seen from him so far.

“I would say the number one thing I noticed with him initially was just his positivity. If we ran a bad route or it was incomplete, [he said], ‘Hey, don’t worry about it. We’ll get the next one.’ Then, really encouraging when you had a good catch or you ran a good route – stuff like that,” Brate told reporters Wednesday.

“But there’s been times, too, where he’s kind of gotten on guys as well if it’s not up to the standard we’re hoping for. I think he does a good job balancing the two. I’ve seen him, obviously, on gameday really go after guys. I think that’s just his competitive nature – I think that’s kind of what sets him apart. But, in practice we’ve kind of seen a little bit of both.”

It’s fair to say having a six-time Super Bowl champion under center has led to an increased sense of urgency in Tampa.

“I think that’s pretty spot on,” Brate said. “He has raised the expectations. Having a guy like Tom in here leading the team with the success he’s had in his career definitely raises the expectations that we have for ourselves. I wouldn’t say it’s about letting Tom down – we look at the expectations as a positive.

“We’re going to have more eyes on us – a chance to show the country who we are as players and as a team. I think it’s super exciting for us to have those expectations and it’s going to be a great opportunity.”

The Bucs finished a subpar 7-9 last season, but Brate is right. With Brady onboard plus former Pats tight end Rob Gronkowski to bolster the offense, expectations have never been higher for this Tampa Bay team.

Brady and the Bucs are set to begin their season Sept. 13 vs. Drew Brees and the New Orleans Saints.