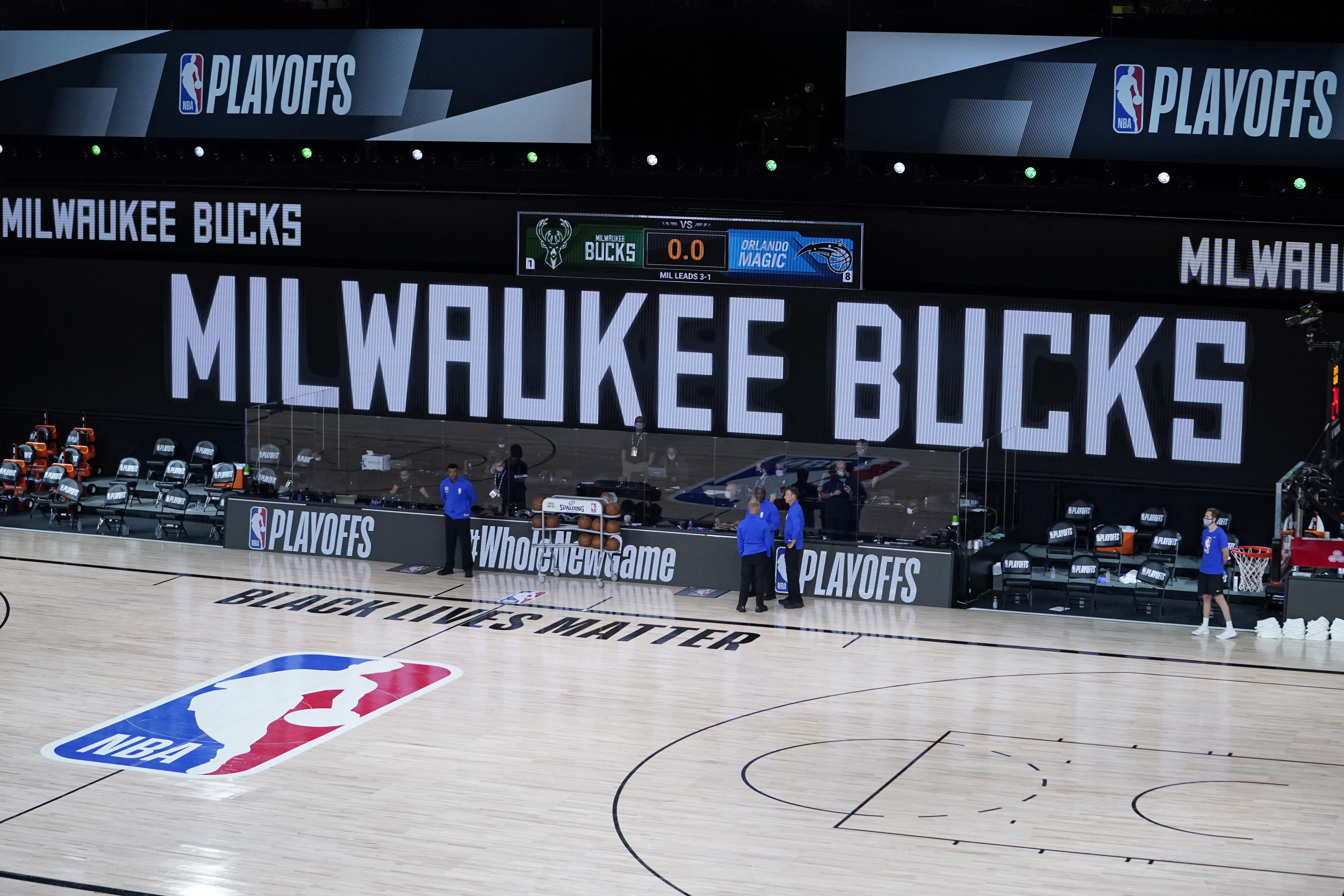 The NBA constructed a bubble to keep the coronavirus out. It couldn’t do anything about real life though.

Now, in the wake of the police shooting of Jacob Blake in Kenosha, Wisconsin, the entire NBA playoffs are teetering as players are rising up by sitting down, refusing to serve as society’s entertainment while they feel threatened, hopeless and angry.

They aren’t going to shut up, and for now they aren’t even going to dribble. At least not while emotions are raw, the opportunity is rare, and the belief they can do so much more than just be basketball players is at hand.

It started Wednesday afternoon, when the Milwaukee Bucks chose to walk out of their playoff game against the Orlando Magic. Bucks players were reportedly in the locker room trying to reach the attorney general of Wisconsin.

That decision set off a string of discussed strikes that led to postponements that wiped out the entire slate of Wednesday’s NBA games (Oklahoma City-Houston and the Los Angeles Lakers-Portland).

No basketball on Wednesday. No one should count on Thursday. Who knows when it returns, if at all, in 2020?

Is this what ends the playoffs, a fight against police brutality and for social justice doing what a pandemic couldn’t?

Maybe. It’s all on the brink right now, as unprecedented as it is unpredictable.

Some players have discussed heading home, which would cause the entire Orlando bubble to reset. Some just can’t imagine staying there and not returning to their communities, returning to the frontline.

Some things are just more important than chasing a championship.

The central issue never seems to go away. Cellphone videos emerging from this city and then the next, no one sure where it will happen next, just that it will.

Now the players are saying they will sacrifice plenty to do what they can to force reform, to force a country that has for too long accepted that this is just part of life to confront the issue.

Money. Fame. A championship they’ve worked and dreamed a lifetime to achieve. And, yes, plenty of backlash from a segment of society that will not see them as heroes and will most certainly try to marginalize them.

No matter, the NBA players aren’t backing down. They’ll deal with it. This is different stuff, a different level. Taking a knee before a game or raising a fist during a medal ceremony rocked the country, but never before has a league just had to shut it down.

Now we have, at least for a day. Probably much longer than that.

And this isn’t limited to just basketball. The Milwaukee Brewers of Major League Baseball also refused to play Wednesday, causing their game against Cincinnati to be postponed. On Tuesday, the NFL’s Detroit Lions, after what was called an “emotional” and “heavy” meeting with players and coaches, decided to call off practice to bring attention to the issue. They wondered out loud if this would cause a snowball.

Maybe. The NFL opener is two weeks from Thursday.

“It’s amazing why we keep loving this country, and this country does not love us back,” Doc Rivers, the coach of the Los Angeles Clippers who grew up the son of a Chicago cop, said Tuesday night. It was a statement that galvanized the league.

Rivers has a big voice. All these players do. The league has power, its billionaire owners even more.

The key here may be finding specific calls for action, with Rivers talking not just emotional outrage but specifics about unions and funding. Don’t just add attention to the issue. Work for something, whether it’s from the NBA and its owners specifically, or politicians and society in general.

It’s been a strength of many players, specifically LeBron James, who’s “More Than A Vote” coalition is trying to register and educate voters so it can make a real difference in a real way.

The spotlight is bigger than ever now, players hoping action is born from the outrage.

If nothing ever changes, then maybe something has to change. If real talk about the real issues here aren’t being heard, then maybe the background noise of buzzer-beaters and playoff victories needs to fade out so it can’t be ignored.