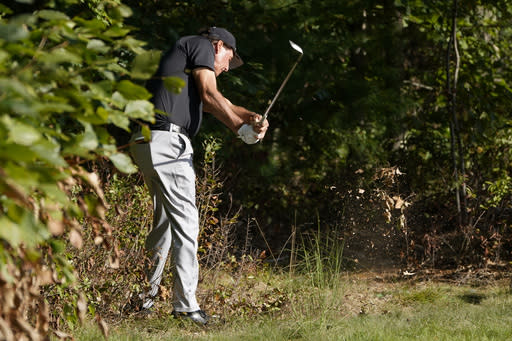 RIDGEDALE, Mo. (AP) — The hole Phil Mickelson considered the most important in the second round of his PGA Tour Champions career was not any of the eight he birdied but rather the only one on which he made bogey.

He was 5 under after the front nine Tuesday at Ozarks National when he hit driver at the par-4 10th. The ball wound up in such heavy rough that Mickelson couldn’t find it, forcing him to take a penalty stroke. He still wound up making a long putt to salvage bogey, and that gave him some momentum for the rest of the round.

”I was able to get right back to even par on the back side with a birdie on the next hole, and then I made a couple more coming in,” said Mickelson, whose 7-under 64 left him 17 under.

That was good for a four-shot lead over Tim Petrovic and Rod Pampling, who will be his playing partners for the final round.

”I’ve been putting really well,” Mickelson said. ”Today I didn’t drive it the way I’ve been driving it. I kind of a hung a few drives, so I’m going to the range and try to work on that now. But when I come out tomorrow I’ll try to be a little bit more aggressive with the driver and see if I can make a few more birdies.”

Playing in the final group and with the shadows getting long, Mickelson picked up right where he left off after his opening-round 61. He made birdie at the third and then rattled off three straight beginning at the par-4 fifth, where he nearly chipped in for eagle.

Petrovic tried to make a run at Mickelson, but even one of his career-low rounds only got him so close. His putter went cold down the stretch and a poor approach at the par-4 finishing hole resulted in bogey.

Mickelson added a bridie at the ninth, the only hole he bogeyed on Monday, after a pretty flop shot over the bunker. After the lost ball at the 10th, Mickelson responded by adding two more birdies.

The second of them at the par-3 12th was a backhanded tap-in. His approach shot barely carried onto the front edge of the green, then nestled up to about an inch from the hole.

Mickelson could still squander the lead in the final round Wednesday, when tee times were moved to the early morning because of expected bad weather in the afternoon. But given the quality of his short game through 36 holes, the more pressing question is whether he could break the PGA Tour Champions’ 54-hole scoring record of 191 – shared by Bruce Fleisher, Loren Roberts, Bernhard Langer, David Frost and Rocco Mediate.

Mickelson, who decided to make his debut on the over-50 tour to continue his U.S. Open prep after he was eliminated from the PGA Tour’s FedEx Cup playoffs, would need to shoot 65 in his final round Wednesday to move atop the list.

Petrovic and Pampling each shot 64-65 over the first two rounds. Rocco Mediate struggled coming in and was at 12 under. K.J. Choi was another shot back, and Steve Stricker and David McKenzie were at 10 under.