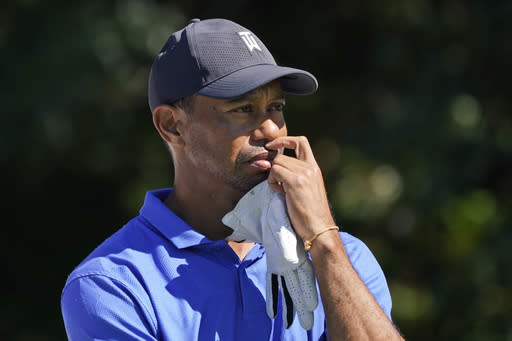 OLYMPIA FIELDS, Ill. (AP) — Tiger Woods arrived at Olympia Fields for the first time in 17 years, this time with no one around to chase after his every move from the moment he stepped out of the car until he walked off the course.

That’s not a bad thing.

He’ll be in a red shirt on Sunday with about the same number of people.

That’s not good, at least not for him.

Woods is learning after three tournaments what others have begun to realize over the last three months. Some players thrive on energy from the crowd as a pick-me-up. Now the reaction, the volume, is the same for a birdie as a double bogey.

Woods is one of those players who feeds off noise.

”Always have,” he said. ”I’ve played in front of thousands of people ever since I turned pro 24 years ago. It’s always been odd when I haven’t played in front of people. In one way, it’s been nice between tees not getting tapped or getting a glove pulled out of my pocket. Those are things I’ve had to deal with for a very long time.

”But you hit good shots and you get on nice little runs … we don’t have the same energy, the same fan energy.”

This is not his issue alone, nor is it the reason he has yet to finish in the top 35 in the three tournaments he has played since golf returned from the coronavirus-caused shutdown. Hitting good shots and making putts goes a long way in any environment.

Graeme McDowell was walking along the ninth fairway in the middle of his second round last week at the TPC Boston when he said he felt like a ”golf zombie.”

The courses are different and look the same. They’re empty. McDowell spoke of needing the adrenaline he gets from the crowd around the first tee at a U.S. Open or Ryder Cup. Maybe some players do better with no one watching, especially if they’re on edge and need something to calm them down. McDowell isn’t one of them.

Neither is Rory McIlroy.

He played the final two rounds with Woods, as big a draw as there is in golf, with hardly anyone watching. Woods began the final round with four straight birdies and the only buzz came from Twitter.

McIlroy knows about ebbs and flows in his game. He once missed four out of five cuts and won three out of four tournaments, all in a span of four months in 2012.

But his play since returning to an empty stage in June is worth noting.

He had had seven consecutive top 5s, including a victory at a World Golf Championship, and reached No. 1 in the world. Since the return, he has seven straight tournaments out of the top 10 and has yet to reach the back nine with a chance to win.

Coincidence? Maybe. Three months off surely cost him some momentum.

”This is going to sound really bad,” McIlroy said, ”but I feel like the last few weeks, I’ve just been going through the motions. … And look, that’s partly to do with the atmosphere and partly to do with how I’m playing. I’m not inspiring myself, and I’m trying to get inspiration from outside sources to get something going. I can definitely see where Graeme is coming from.”

That might allow McIlroy to reconsider what he once said about Woods. He played with Woods and Justin Thomas in the opening two rounds at Riviera a few years ago and was amazed by all the commotion around Woods.

”I swear, playing in front of all that, he gives up half a shot a day on the field. Like, it’s two shots a tournament he has to give to the field because of all that goes on around,” McIlroy said that day. ”Whoever is teeing off at 8:30 in the morning doesn’t get that and can just go about his business. He has to deal with that every single time.”

If all that commotion costs Woods two shots to the field, what does it cost the players with him?

Without spectators, has Woods lost an advantage he once had?

”Absolutely,” Woods replied. ”Anyone who has played in front of thousands of people, it is very different. That’s always been one of the things I’ve become accustomed to. The guys who played with me, who haven’t become accustomed to it, they have only experienced one round here and there. That’s been every round I’ve played for over two decades.

”That advantage – for me, and some of the other top players – trying to deal with all that noise and the movement, that experience is no longer there.”

Nick Faldo touched on this when he was discussing the 10-year anniversary of Woods winning the 1997 Masters, a watershed moment in golf. Faldo said that when he slipped the green jacket on Woods that Sunday, he thought the Masters would be the only major he could win.

Sure, Augusta National suited his game.

”But also because the Masters was the only major that the media was kept outside the ropes,” Faldo said. ”And I thought that was going to be his biggest challenge. Now it’s his greatest asset. Everyone joining him now on the weekend at a major goes into his world. That’s Tiger’s arena. Other guys will step into that arena one week and go back out. He’s there all the time. And good luck coming into his world.”

It’s a new world for everyone now.

It’s especially different for Woods, not so much for some of the players paired with him.

For the less accomplished players who always wondered what it was like to be in his shoes, the absence of spectators has allowed Woods to see what it’s like to be in theirs.