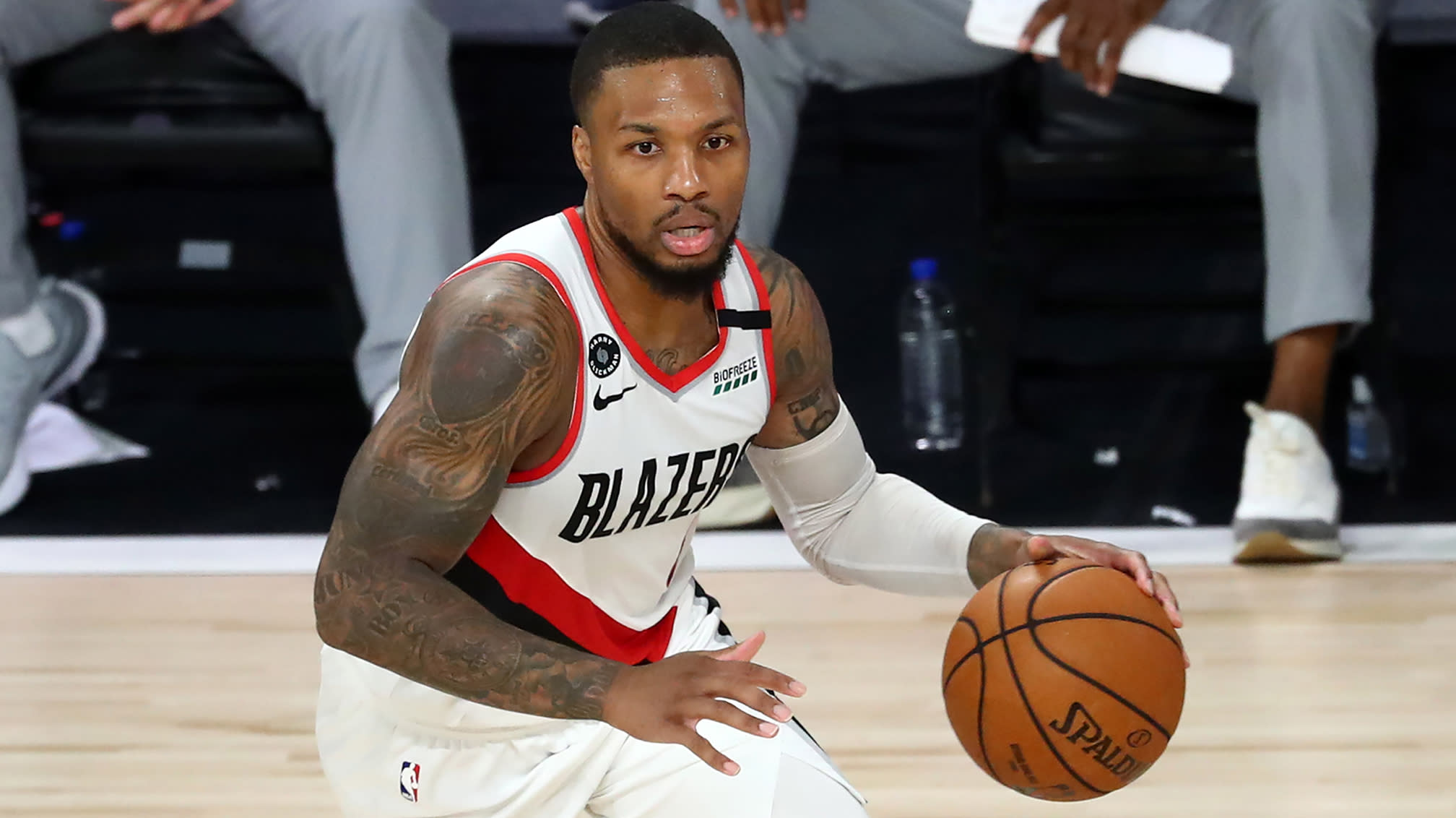 Another first round series has reached its conclusion, as the Heat finished off a four-game sweep of the Pacers on Monday. Milwaukee and the Lakers took steps toward ending their respective series, while Oklahoma City pulled even with Houston. Giannis Antetokounmpo and LeBron James were among the standouts, but more noteworthy may be the injuries that Jimmy Butler, Anthony Davis and Damian Lillard are currently dealing with.

Orlando was once again without Aaron Gordon and Michael Carter-Williams due to injury, with Gary Clark getting another start at the four and Wesley Iwundu being the ninth man in the rotation. Clark filled the stat sheet in his 27 minutes on the floor, finishing with 12 points (4-of-8 3-pointers), one rebound, one assist, one steal and one blocked shot. Even with Clark’s move into the starting lineup, there will be better low-cost DFS options available on Wednesday’s schedule. Iwundu accounted for just one rebound and one steal in ten minutes, and he didn’t attempt a shot. No use rolling the dice there, either. Nikola Vucevic (31/11/7/2 blocks and six 3-pointers) had a good game, shooting 11-of-20 from the field and 3-of-3 from the foul line, but he did not have enough help.

Terrence Ross scored 19 with eight rebounds and one assist in 31 minutes off the bench, but he was 1-of-8 from beyond the arc. And Evan Fournier remains mired in a slump, as he shot 4-of-14 from the field and finished with 12 points, eight rebounds, three assists, one steal, two blocks and three 3-pointers. The good news was that he managed to fill his stat line, but the bad is that for the series he’s shooting 33.3 percent from the field and 32.1 percent from three. Vucevic is the most reliable of the Magic players in DFS formats at this point, although Markelle Fultz did finish with a line of 15 points, five rebounds, seven assists, two steals and two 3-pointers in 31 minutes.

As has been the case throughout this series the Magic had no answer for Giannis Antetokounmpo, who put up 31 points, 15 rebounds, eight assists, one blocked shot and one 3-pointer in 34 minutes. This was his third game with at least 15 rebounds in this series, and Giannis also has two 30/15 games to his credit (31 & 17 in Game 1). Wesley Matthews has been a solid 3-pointers option in this series, averaging 2.8 3-pointers per game. He was 4-of-6 Monday, scoring 12 points to go along with two rebounds, three assists and one steal. The lack of production in other areas makes Matthews a tough sell in many formats, however.

Khris Middleton (21/10/3 with four 3-pointers), Brook Lopez (10/2/1/2/3 with two 3-pointers) and Kyle Korver (10 points, two 3-pointers) also scored in double figures, while Eric Bledsoe (6/6/5/1/1) and George Hill (9/2/6/2 with one 3-pointers) had quiet days scoring-wise but managed to make noteworthy contributions in other categories. Ten Bucks played at least 12 minutes, with Ersan Ilyasova (five points in seven minutes) being the 11th man in the rotation.

Houston went cold from three during the fourth quarter, and that opened the door for Oklahoma City as the Thunder rallied to even the series at two games apiece. What was more troublesome for Houston was the lack of production from the foul line. After scoring at least 16 points from the charity stripe in each of the first three games of the series, the Rockets had just nine in Game 4 (9-of-10). James Harden (32/8/15/4 with six 3-pointers), Eric Gordon (23/1/3/2 with three 3-pointers) and Danuel House (21/6/1/1 with four 3-pointers) were the only Rockets to attempt a free throw in this one, and only eight players saw action.

Robert Covington (14/6/1/2 blocks and four 3-pointers), P.J. Tucker (11/11/1 with three 3-pointers) and Jeff Green (10/5/3 with two 3-pointers) also scored in double figures, and that’s about as deep as this roster goes when it comes to fantasy value. Ben McLemore played just nine minutes, and Austin Rivers has gone ice cold since his 41-point explosion against the Kings back on August 9. In the seven games since he’s scored a total of 36 points, which breaks down to an average of 5.1 points per game. Hard to imagine anyone still being on the Rivers bandwagon at this point, but the last passengers likely hopped off after Monday’s scoreless effort. The Rockets really need Russell Westbrook back in the rotation, but it is anyone’s guess when he’ll be healthy enough to play.

Oklahoma City has continued to use its newly discovered closing lineup to great effect, with Luguentz Dort replacing Steven Adams (12/8/1) and Danilo Gallinari (9/3/1 steal and one 3-pointer) serving as the de facto center. That helps with defending Harden, and not by limiting his scoring. With Dort able to remain close with minimal to no help, the other Thunder defenders can stay home and challenge Houston’s shooters. That was a big reason why the Rockets went cold down the stretch. Dort shot 3-of-10 from the field, finishing with nine points, five rebounds, two assists, one steal and three 3-pointers, and his value to the rotation outweighs his fantasy value.

Oklahoma City’s guard trio of Dennis Schroder (30/1/3 with four 3-pointers), Chris Paul (26/6/3/3) and Shai Gilgeous-Alexander (18/12/6 with two 3-pointers) once again led the way offensively, with Schroder’s 30 points representing a playoff career-high. Billy Donovan went with an eight-man rotation, with Darius Bazley and Nerlens Noel joining Schroder as the key bench contributors. Terrance Ferguson played just three minutes, which obviously isn’t enough to make him any kind of factor fantasy-wise. Bazley finished with seven points, five rebounds and one 3-pointer in 19 minutes, and he isn’t going to be a great pick with regard to playoff fantasy leagues. That being said, his play during the seeding games makes him an intriguing late-round possibility for next season.

The Heat are on to the second round, and the time off will give Jimmy Butler some much-needed rest. He was dealing with a sprained left shoulder heading into the game, and was limited to six first-half minutes as a result. He finished with 23 minutes, posting a line of six points, three rebounds, two assists, one steal and one blocked shot. Butler’s injury freed up some minutes for Kendrick Nunn, who’s still working his way back after not only a late entry into the bubble (COVID-19) but also a departure due to a personal matter. He played 14 minutes, scoring seven points with three rebounds, two assists and one 3-pointer.

That’s not enough to justify picking up Nunn ahead of Game 1 of the Heat’s second round series (likely against the Bucks), but there will be a point in the postseason when his contributions will be needed. At minimum a good showing in Game 1 would be required for me to hop back onto the Nunn bandwagon fantasy-wise.

Nate McMillan went with his starters for much of this one, which was to be expected considering the fact that Indiana’s season was on the line. Four of the five starters played at least 40 minutes with Victor Oladipo (25/8/5/5 with five 3-pointers) logging a game-high 44, and each of those players scored in double figures. Myles Turner (22/14/1 steal/5 with two 3-pointers), T.J. Warren (21/5/4 with three 3-pointers) and Malcolm Brogdon (13/4/7/1 with two 3-pointers) were the other three, but as was the case throughout the series they didn’t get enough help from the supporting cast. The other five Pacers that played combined to score six points, with Justin Holiday and Doug McDermott scoring three apiece.

Domantas Sabonis (foot) will be a major player fantasy-wise next season, but it will be interesting to see if Turner can be more productive if those two both start as they did this year. While he was able to put up more 3-pointers this season, finishing with a career-high 250 attempts, and the shot has become a bigger part of his game with each passing year. But his overall scoring and rebounding averages dropped with Sabonis moving into the starting five. Oladipo will be another offseason removed from the ruptured quad he suffered in January 2019, which should bode well for his fantasy value. And he’s one of the players in the rotation who will have contract questions to answer this offseason, even though Oladipo still has one year remaining on his current deal.

“Mamba Day” plus special snakeskin jerseys made in honor of the late Kobe Bryant meant one thing: Portland was getting blown out. The Lakers scored the first fifteen points of the game, and the only drama to be had were injuries suffered by Anthony Davis and Damian Lillard. Davis was pulled during the third quarter due to back spasms, but he didn’t sound too concerned when asked about the issue after the game. Davis played just 18 minutes, finishing with 18 points, five rebounds, five assists, one steal and two blocked shots. Those who rostered him were surely hoping for more production, but given how quickly this game got out of hand there was no way the Lakers were going to risk Davis’ health.

As for Lillard, his issue was a bit more troubling. He suffered a right knee injury during the third quarter, initially trying to play on it before having to signal for a sub to depart. He did not return, and there were reports that Lillard would undergo an MRI after the game. With Portland trailing the series 3-1 they’re likely already on borrowed time, and losing Lillard would only make matters worse. He finished Game 4 with 11 points, one rebound, four assists, one steal and one 3-pointer in 27 minutes, shooting 3-of-9 from the field and 4-of-4 from the foul line. Now we wait to see if he’ll be available to play Wednesday night.

LeBron James (30/6/10/1 block and four 3-pointers) took over in just 28 minutes of play, even knocking down a three from “Lillard range.” Kyle Kuzma (18/2/2 with five 3-pointers), Danny Green (14/4/1/1/2 with three 3-pointers), Dwight Howard (13/8/2) and Kentavious Caldwell-Pope (12/1/1 with two 3-pointers) all scored in double figures, and the blowout meant extended minutes for both Dion Waiters and J.R. Smith. After playing a total of nine minutes in Game 3 (all by Smith) those two combined to play 31 minutes Monday, with Smith hitting a 3-pointer to pull into a tie with the aforementioned Bryant for ninth on the league’s career postseason 3-pointers list. Rajon Rondo missed his second straight game due to back spasms, and his eventual return will likely cut into Alex Caruso’s (5/3/3 with one 3-pointer in 21 minutes) playing time.

Portland finished the game with eight double-digit scorers, but a lot of that damage was done well after the outcome was decided. Jusuf Nurkic (20/13/4/1) was better in Game 4 than he was in Game 3, but it didn’t matter. C.J. McCollum (18/5/2/2/1 with two 3-pointers) and Carmelo Anthony (16/2/1 with one 3-pointer) combined to shoot 11-of-28 from the field, and it goes without saying that Portland will need more from those two in Game 5 whether Lillard’s available to play or not.

Wenyen Gabriel and Mario Hezonja received the majority of their minutes in the second half, while Gary Trent Jr. and Anfernee Simons figured more prominently in the rotation. Provided Lillard’s healthy, it’s unlikely that Portland goes any further than seven deep on Wednesday with Trent Jr. and Simons being the two reserves. And I wouldn’t go with either fantasy-wise, even with the way that Trent has played in the bubble.