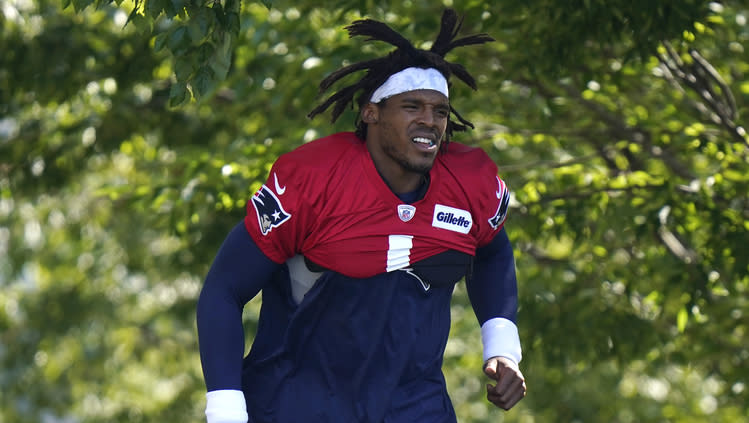 FOXBORO — After Friday’s practice, when the Patriots were without Jarrett Stidham during team drills, there was a chance the second-year quarterback would get right back on the horse Sunday after a day off. Offensive coordinator Josh McDaniels thought Stidham would be “ready to roll.”

Stidham did not roll on Sunday, though. He threw only during drills and did not take a single snap during offense-versus-defense periods. That left the majority of the day’s work to the player who looks like — three weeks before the first regular-season game of the season — he’ll be Tom Brady’s replacement for 2020: Cam Newton.

Here’s everything we saw from Sunday’s session…

Shells and shorts. The tempo was bumped up from Friday’s practice, but it still was not a full-go kind of practice. Wouldn’t come as a surprise to see the Patriots back in full pads soon. The last time they were fully padded was Thursday.

According to The MMQB’s Albert Breer, the Patriots had false-positive COVID results processed at a lab in New Jersey. They were not the only club to experience false-positives, but the test results may have helped to explain some of the absences at Sunday’s workout.

Running back James White, running back JJ Taylor, corner Michael Jackson and tight end Jake Burt were all new absences Sunday. Stephon Gilmore was missing from practice for the third straight session. Adrian Phillips was missing from the start of the day’s work but emerged eventually with no helmet or shells on to watch the practice.

Defensive lineman Beau Allen and linebacker Tashawn Bower were also out. Receiver Jeff Thomas, who appeared to tweak his leg on Friday, was not spotted. Running backs Sony Michel and Lamar Miller — both still on the physically unable to perform list — were missing as well.

Rookies Kyle Dugger and Will Hastings as well as second-year man Jakobi Meyers appeared to be limited during the practice.

The emphasis today was on no-huddle work for both the offense and defense. Prior to getting into that, though, the Patriots did their standard warm-up routine. During their dynamic stretching period, Future’s “Life is Good” blared over the public address system on the fields behind Gillette Stadium. the song begins, “Workin’ on the weekend, like usual.”

During drills, with receivers and tight ends working routes against air, both rookie tight ends made eye-opening catches. Devin Asiasi plucked a ball out of the air, twisting fluidly mid-stride, when it was thrown behind him. Dalton Keene laid out for a pass thrown down the seam that he reeled in with his fingertips.

When go-routes were the focus, Newton started out by under-throwing a few to Damiere Byrd and Devin Ross. Later he dropped dimes to Julian Edelman, Gunner Olszewski (clearly battling the sun) and Mohamed Sanu. N’Keal Harry dropped one well-placed pass from Newton during the period. Isaiah Zuber also dropped one sent his way.

Fullback Jakob Johnson also made a nice back-shoulder catch during the no-defense period. He’s a bigger body, but his hands aren’t necessarily made of stone.

After drills, the Patriots went to work in a 7-on-7 period. That was followed up immediately by an 11-on-11 session. The team alternated between hurry-up 11-on-11 work and kickoffs the rest of the way. The practice finished on a nice completion in the back of the end zone from Newton to Sanu.

Jarrett Stidham did not participate in team periods, throwing only in drills. That left a lot of work to be shared between Newton and Hoyer. Here’s how it shook out.

Newton saw 12 snaps in 7-on-7 periods, going 8-for-12. Asiasi had the catch of the period, with a leaping grab secured with Devin McCourty nearby in coverage. Running back Damien Harris caught three passes, including one where he flashed nice hands going up the sidelines on a wheel route out of the backfield. Tight end Paul Butler dropped one of Newton’s accurate throws.

Brian Hoyer went 3-for-6 on his 7-on-7 reps. One was reeled in by Harry but secured against his chest, and one of Hoyer’s incompletion came as a result of a drop by Harry.

Asiasi caught one of Hoyer’s passes but had the ball punched free by Cassh Maluia. Asiasi had to run a lap as a result.

Devin Ross appears to be picking things up nicely in his second season in the Patriots offense and garnered praise for one well-run route.

Cam Newton saw 30 reps in the 11-on-11 period before the lone field-goal period of the practice. Hoyer saw 12 reps in the same span. Clearly, the Patriots are doing all they can to get the former MVP comfortable with his new offense and new teammates. After the field-goal period late in the practice, Hoyer saw seven more snaps while Newton saw nine.

In Newton’s 39 snaps in the 11-on-11 periods, he started out 7-for-7 before having a pass broken up by rookie Myles Bryant. In all, he went 19-for-27 on his 11-on-11 passing reps. Some of his nicest-looking completions came to Julian Edelman, who was there on a series of quick strikes from Newton — including one where Newton identified all-out pressure and got the ball out of his hand quickly.

Two of Newton’s first three completions in 11-on-11 work, and seven completions in all, went to Edelman on Sunday. The two worked on a side field at one point to talk routes, the latest of several side-session powwows between the pair this summer.

“Getting to know each other as people on the field, off the field,” Edelman said of Newton after practice. “Trying to build a rapport. That’s what I’m doing also with Hoy and with Stid but those guys have been around. Gotta catch up with Cam.”

Newton also hit Ryan Izzo on a contested pass in the end zone that only Izzo could reach. He later hit Sanu with a well-placed high pass on the back end line for a touchdown to end the practice. Newton put the football just beyond the reach of Harry on a go route and over-shot Damien Harris on a screen attempt, but otherwise it was a relatively clean day for him.

Hoyer went 12-for-15 in 19 snaps of 11-on-11 periods, with one pass picked off by corner Justin Bethel deep down the field. Hoyer had one pass dropped by Asiasi, and another that was broken up over the middle when targeting Harry.

It’s clear which of the two veteran quarterbacks is more fluent in the language of the Patriots offense, as Hoyer was barking out orders almost non-stop during hurry-up periods. Newton made calls at the line himself, but Hoyer seemed to do so more frequently and confidently.

That meant tons of reps for Harris and Rex Burkhead. Harris looked comfortable taking exchanges from Newton, and he caught the ball cleanly in term periods. The 2019 third-rounder is angling for a bigger offensive role in Year 2.

Lighter last year, Wise was a bit of a ‘tweener between the burlier 3-4 defensive ends and lighter, more athletic outside linebackers. He now looks like he could be in the 3-4 end rotation as an interior-line defender with Lawrence Guy, Adam Butler and Byron Cowart.

The strength of the Patriots defense is in the secondary but it was a good day for Belichick’s front-seven.

Harry chatted with a trainer and walked to the sideline while play continued. He had drops in team work and in drills. His development could be crucial to the Patriots passing game, but after missing three days he didn’t have his best day Sunday.

Physically, he still looks like the most talented tight end in the group. But Sunday might’ve been a wakeup call of sorts when it comes to the focus the Patriots coaching staff requires.

When working in an 11-on-11 period, he made two of four kicks aimed at the narrower-than-normal uprights. A third kick certainly would’ve gone in on normal uprights. Still, it was a bit of an adventure of a day for Rohrwasser.