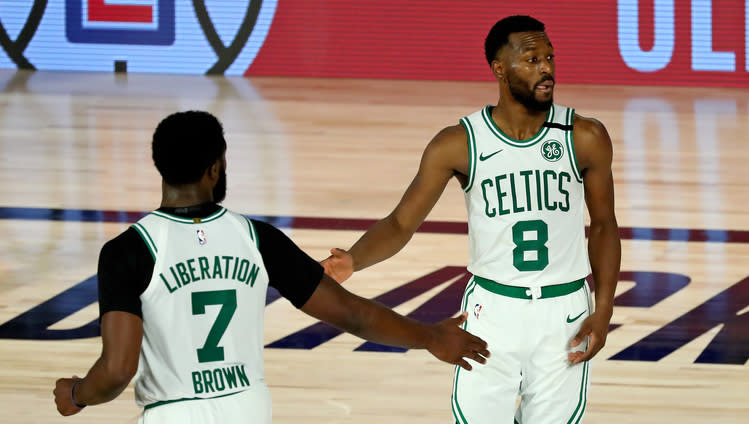 Kemba Walker has praised Jayson Tatum and Jaylen Brown for how they have emerged as stars-on-the-rise in the postseason.

Well, Walker is a pretty darn good player, too.

And the Sixers saw this first-hand in Game 3 with Walker leading a 10-0 run by Boston to close out the game and all but put the series away with a 102-94 win.

The Celtics now lead the best-of-seven series 3-0 with a chance for a series sweep on Sunday.

Tatum made some big shots late in the game as did Brown.

But when the Celtics absolutely needed a basket in the fourth quarter, it was Walker delivering a step-back jumper over the outstretched hands of former Celtic Al Horford.

There was a bit of irony to that basket being made when you consider it was Horford’s departure to Philadelphia that would prove central to Boston having the fiscal flexibility to sign Walker following Kyrie Irving’s departure to Brooklyn.

Walker, who led all Celtics with 24 points, eight rebounds and four assists, is one win away from advancing to the second round of the playoffs for the first time.

And this win, unlike the first two, was a lot harder to come by.

Philadelphia, well aware that a loss on Friday pretty much meant the end of their season, played with a heightened sense of urgency most of the game.

But the shortcomings such as shot-making that have haunted them this entire series, were once again problematic down the stretch.

And those shortcomings were once again exposed by Boston which continues to dominate the Sixers in the postseason, moving the team one win away from taking Walker somewhere he has never been before in the NBA – out of the first round of the playoffs.

He continues to be the one force on the Sixers roster that Boston has not been able to limit. Embiid led all scorers with another powerful double-double, tallying 30 points to go with 13 rebounds.

Clinging to a 96-94 lead, Boston’s Kemba Walker was being defended by Al Horford. Walker created space with a dribble-drive fake to the basket, then stepped back and drained a back-breaking jumper with 65 seconds to play. Walker’s basket was part of a 10-0 run for Boston to close out the game.