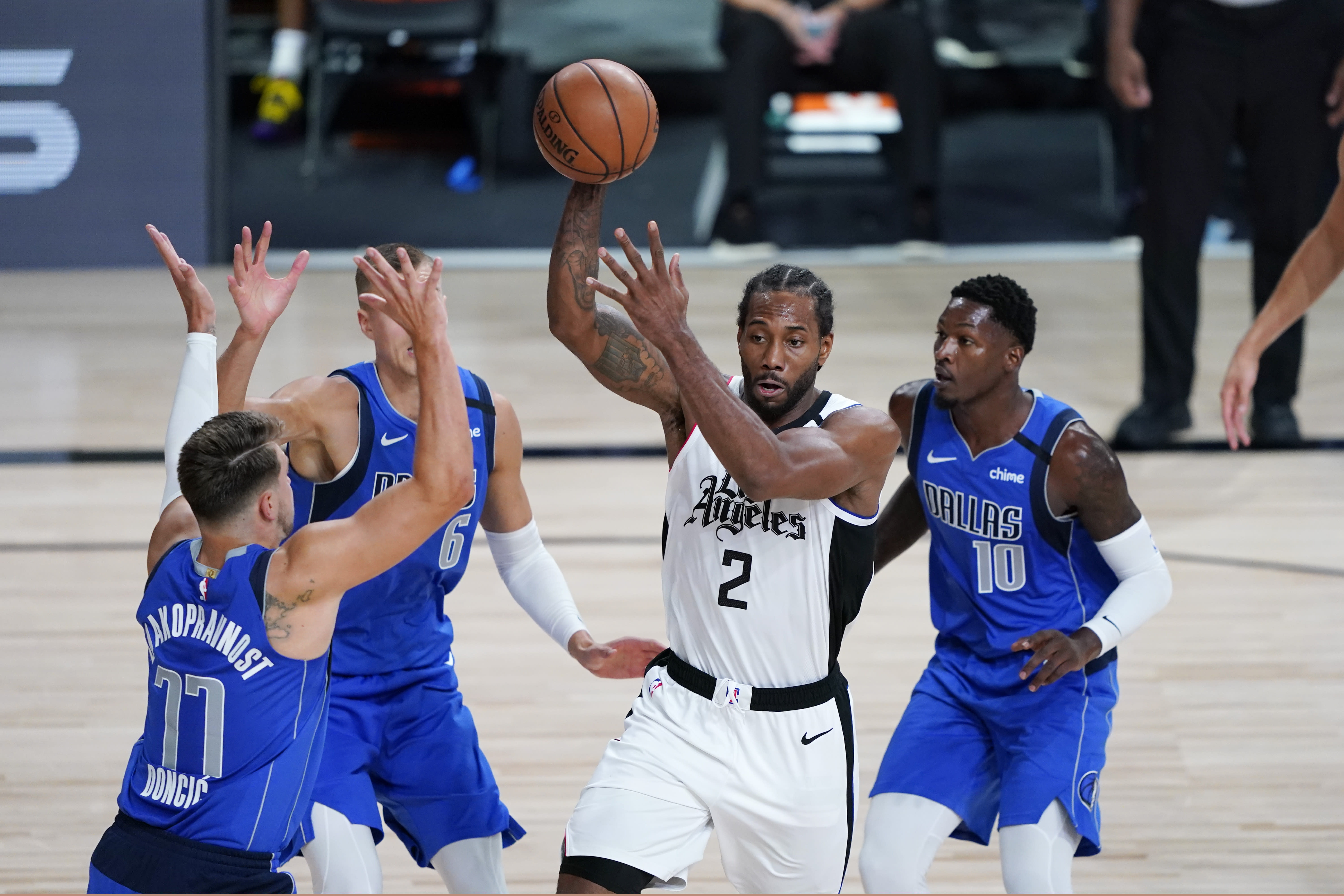 Day 5 of the NBA playoff bubble tipped off Friday afternoon with a slate of Game 3s at the league’s Disney World campus in Florida. Action from the bubble will be updated here throughout the day.

The bad for the Dallas Mavericks was having few answers for a Los Angeles Clippers team appearing to gain steam during Game 3. The worse was who they might not have for Game 4.

The Clippers posted a 130-122 win on Friday to take a 2-1 series lead, but all attention was on the ankle of Luka Doncic, who exited the game twice due to an ankle sprain in the third quarter.

Doncic attempted to play through the sprain at first, but eventually exited after three minutes in the third quarter. He was later seen on the Mavs bench with his ankle taped up and on ice.

Even without Doncic, the Mavericks were at least able to keep it competitive in the fourth quarter of a game in which the Clippers were once in full control. Kawhi Leonard appeared to score at will down the stretch, dominating the Mavericks on the inside and finishing with 36 points on 13-of-24 shooting, 9 rebounds and 3 assists.

The lowlight for the Clippers was the play of Paul George, who posted a second straight no-show performance with 11 points on 3-of-16 shooting. He’s now 7-of-33 since Game 1, and it’s hard to imagine the Clippers reaching the Finals if he’s not making shots from the perimeter.

It had all seemed to add up well for the Philadelphia 76ers.

Joel Embiid looked dominant in the first half, Jayson Tatum got into early foul trouble and the Celtics weren’t getting the easy shots they saw in the first two games of the first round. And yet, the result was the same.

The Celtics held off the Sixers for a 102-94 win that was close until the final two minutes, at which point everything started going wrong for Philadelphia. Tatum blocked an Embiid jumper and drew a clear path foul on the next play. Then Kemba Walker gave the Celtics a four-point lead with an ankle-breaking jump shot, and that was pretty much it for a team that just hasn’t found its footing in the bubble.

Embiid finished with 30 points on 7-of-20 shooting with 13 rebounds. The Sixers as a whole cleaned up on the glass with 20 offensive rebounds, but that meant little when they shot a ghastly 28-of-95.

Walker led the way for the Celtics with 24 points while Tatum finished with a relatively quiet 15 points on 6-of-19 shooting.

The Denver Nuggets swept their three-game season series with the Utah Jazz.

Something has shifted in the bubble.

The Jazz steamrolled the Denver Nuggets on Friday, 124-87, to take a 2-1 series lead. It marked the second straight overwhelming win by the Jazz, who recorded a 19-point victory over the Nuggets on Wednesday.

All of a sudden, the Nuggets look lost in a series they were a slight favorite to win. A Denver defense that has struggled since bubble play began has no answers for Donovan Mitchell and Co.

Utah took control early on Friday with a 24-15 first-quarter lead. The Nuggets never sniffed a single-digit deficit from there as the Jazz dominated almost every aspect of the box score.

Three Jazz starters scored 20 or more points, led by Mike Conley’s 27 points and four assists. He connected on 7-of-8 3-point attempts. It was his first playoff game in the bubble after he left the Disney World campus for the birth of his daughter.

Rudy Gobert added 24 points and 14 rebounds, while Mitchell tallied 20 points and four rebounds. They did so in limited minutes as Utah’s starters rested for most of the fourth quarter.

Meanwhile the Jazz shot 51.2 percent from the field while holding the Nuggets to 37.5 percent. They recorded nine steals while allowing just two. They outrebounded the Nuggets, 50-45 and recorded 27 assists to Denver’s 20.

There was nothing Denver did better than Utah on Friday, and it showed up on the scoreboard.

The series is far from over just three games in. But a matchup that looked like a potential thriller after Denver’s overtime win in Game 1 has shifted very much in Utah’s favor.

After needing a late stop to secure Game 2, the Toronto Raptors had no trouble dismissing the Brooklyn Nets on Friday in a 117-92 Game 3 victory.

With the win, the defending champion Raptors took a 3-0 series lead and stand a win away from a sweep and a second-round matchup with the winner of the Boston Celtics-Philadelphia 76ers series.

The Raptors opened up a 24-17 lead in the first quarter and never let the Nets within double digits after taking a 29-19 lead in the second.

A team that takes pride in its defensive identity, Toronto limited Brooklyn to a dismal 30-of-90 (33.3 percent) shooting performance from the field that included a 16-of-51 effort (31.4 percent) from behind the arc.

Tyler Johnson paced the Nets with 23 points on 8-of-15 shooting. He was the only Nets starter to shoot better than 50 percent from the field.

The two teams will face off on Sunday in Game 4. The Celtics have a 2-0 series lead over the 76ers on the other side of the bracket.