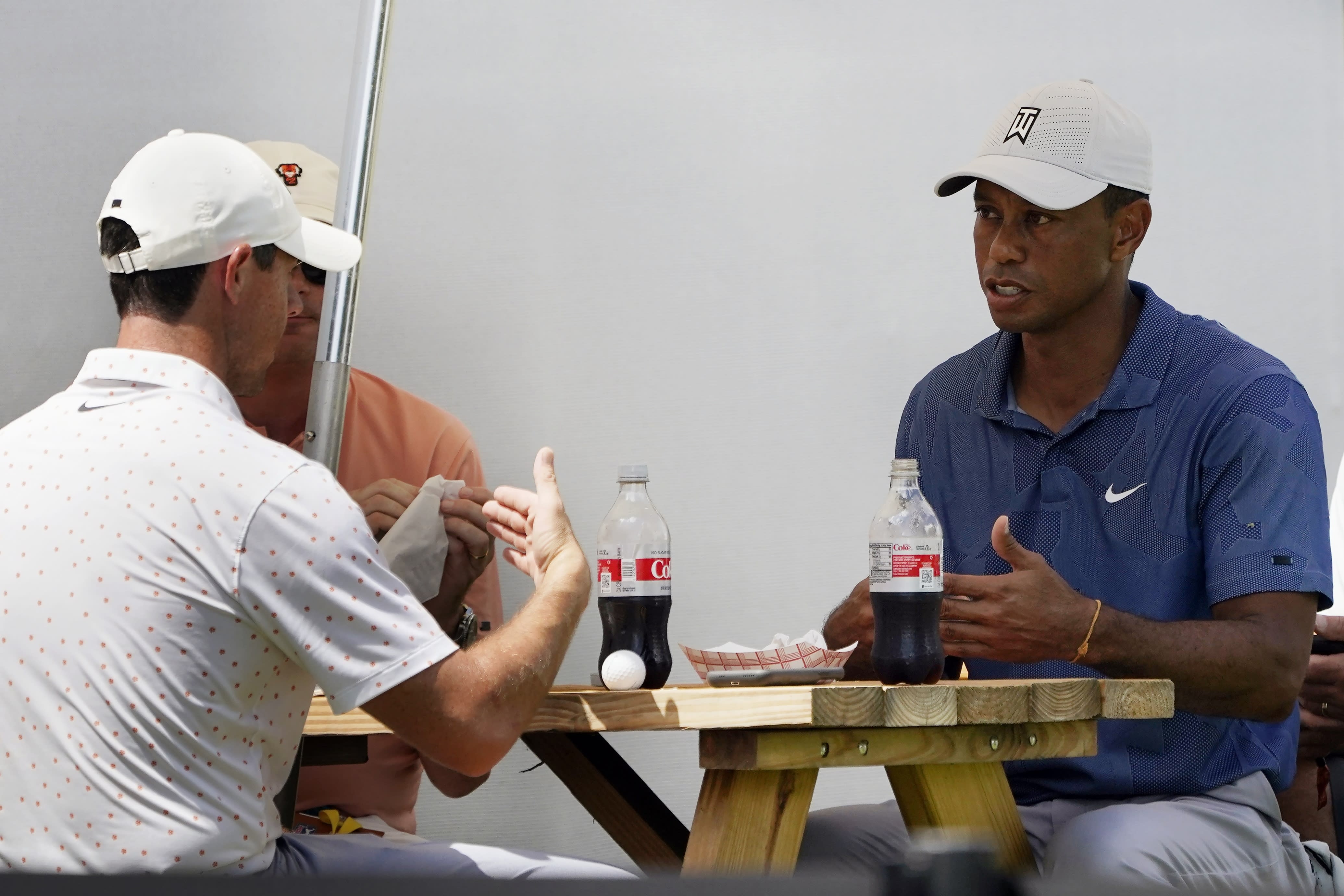 NORTON, Mass. (AP) — The scene is almost as old as the Royal & Ancient game. Two friends meet at the club on a summer morning for a quiet round of golf. They play well at times, poorly at times and both think their scores should have been better.

And then they order a few hamburgers and sit down at a picnic table to eat lunch and share a few laughs.

On Saturday, this was Tiger Woods and Rory McIlroy.

They are two of the biggest names in golf. No one has been No. 1 in the world longer than them over the last 20 years. They draw the largest galleries wherever they play.

That’s what made this occasion at The Northern Trust so eerie, even if it’s now common. There was no one there to watch except for those in a working capacity — camera crew, a half-dozen writers, photographers, Norton police officers on bikes, a few volunteers on each hole.

Woods used his putter to go over a steep slope from behind the 18th green, and he made a 6-footer coming back to end with a birdie. It was this third of the day, not enough to account for the five bogeys in his 2-over 73. Most unusual about this round is that he didn’t break par despite hitting 12 of 14 fairways.

McIlroy two-putted for birdie on the 18th, his fourth birdie in his round of 74. There was no recovering from two triple bogeys on his opening six holes. McIlroy started with a short birdie on No. 1, and he hit a beauty to 10 feet on the par-3 third hole with the pin tucked behind a bunker.

In between, he came up just short of the green on the par-5 second, the ball barely inside the hazard. He tried to chip out, but McIlroy caught too much grass from an awkward stance and a bad lie. The ball went behind him into water, and because it was a yellow hazard, he had to go back 110 yards to the fairway. He made triple bogey.

McIlroy was overheard saying his card read like an area code. That number hasn’t been assigned an area code in the United States, though he might be interested to know it’s the country code for Montenegro.

There was no time to share this pertinent information. Woods and McIlroy both opted not to speak to the media after their rounds, not unusual this late in the season in the third round of a tournament in which they were out of contention.

They did go to the media center, but only to order hamburgers at the kiosk — it’s been a popular all week — grab a seat at a picnic table and chat for the next 30 minutes, undisturbed.

It’s a reminder of golf at the highest level while coping with a pandemic. No spectators have been allowed at any tournament since it returned two months ago. Players are used to it by now, and some have talked about the ease of getting around without so much traffic and distraction.

But there’s no energy, and that’s no fun, either.

Birdies or bogeys, and even the pair of triple bogeys belonging to McIlroy, all get the same reaction. Everyone is playing in the same environment, but some players — Woods and McIlroy are good examples — have talked about drawing from the noise, converting the cheers of a birdie into some momentum.

The TPC Boston did have three spectators, one of them shouting after Woods teed off on the par-5 seventh in such a way that some people don’t miss the fans at all.

“YOU’RE THE MAN, TIGER!” came the voice out of nowhere.

Three men had cut through the thick woods and found a spot — just inside the red hazard line — some 50 yards behind the seventh tee, next to a small pond. McIlroy hit next, and then officers looked around the bushes to find the source of the yell and approached the men, all sitting in lawn chairs.

It appeared to be a pleasant conversation, and the men packed up their chairs and left.

They saw Woods and McIlroy hit drives on a par 5. Better than nothing.