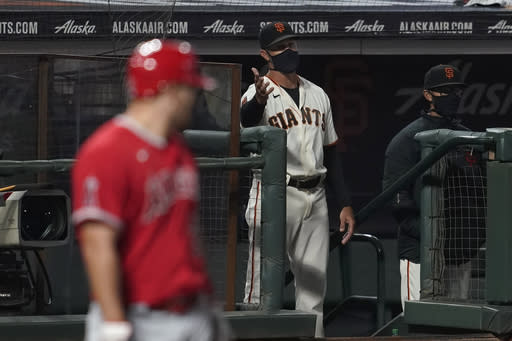 Two days earlier in Anaheim, Trout was upset when Anderson twice threw near his head in the ninth inning. After that game, Giants manager Gabe Kapler said he was giving Anderson, a 25-year-old with control issues, some needed work after not pitching for a while.

This time, the three-time AL MVP turned his head after another heater sailed up and in. Angels manager Joe Maddon loudly cursed and complained before emerging from the dugout to continue – after this week’s previous episode, Maddon said of Anderson: ”That’s just a young man that’s not ready to be here, that’s all that is.”

”Enough was enough,” he said. ”I don’t want to use the word ‘irresponsible’ loosely but in that situation, you pretty much knew it was going to happen again. I’m not accusing the guy of doing anything on purpose. I’m just saying he doesn’t command his fastball enough in order to know where it’s going.”

Maddon wouldn’t call the pitches to Trout intentional but was incensed after it occurred three times in two games.

”A player of Trout’s stature, third ball in the (two games) that we’ve faced them. Too close, too close,” Maddon said. ”It can’t happen. It just can’t happen. The kid’s got eight walks in nine innings, so it’s not an anomaly moment for them.”

A few people in the Giants barked back as Maddon came onto the field and the umpires conferred in the infield, prompting the warning from plate ump Lance Barrett.

Once play resumed, Trout tripled off the fence in left field.

Kapler declined to discuss the situation.

”On a night where Joey Bart got his first major league hit, when he led us to a major league win, and when Brandon Crawford hit his 100th major league home run … anything I say related to that is going to distract and I’m just not going to do that,” Kapler said.

Wilmer Flores homered and drove in four runs for the second straight day and Mike Yastrzemski had a two-run double to lead San Francisco.

Crawford hit his milestone homer and Austin Slater added a pair of hits and scored twice as the Giants won their third straight.

Anthony Rendon had three hits and two RBIs for the Angels. He extended his hitting streak to 10 games but the Angels fell to 8-18, the worst start in franchise history.

Flores hit a two-run homer off Angels starter Jose Suarez on a 3-2 pitch, his second in two days with a full count. Flores walked and scored in the second, had a two-run single in the third and singled again in the fifth.

Crawford hit his milestone home run off Julio Teheran in the fourth.

”It’s really cool,” Crawford said. ”It’s something I never really dreamed of doing in the major leagues, being able to hit 100 homers.”

Suarez (0-1) allowed five runs, five hits and retired only four batters. The left-hander, who was called up from the alternate training site before the game, has not won in 13 consecutive starts dating to last season.

Bart, the No. 2 overall pick in 2018, went 1 for 4 in his major league debut. Batting sixth, Bart was hit by a pitch, struck out with the bases loaded and popped out before doubling for his first hit. He also grounded out in the ninth.

Bart was the Giants’ first-round draft pick out of Georgia Tech and signed for a bonus of more than $7 million.

”The goal is to get Joey in the lineup as much as possible to get as much experience behind the plate and in the batter’s box as possible,” Kapler said.

The Giants optioned catcher Tyler Heineman to their Sacramento alternate site to clear room for Bart’s debut. Starting catcher Buster Posey opted out of the coronavirus-shortened season as he takes care of adopted newborn twin girls.

Right-hander Jaime Barria was optioned to the alternate training site to make room for Suarez.

Angels: Max Stassi started at catcher but left in the second inning after getting hit in the right knee by a foul ball. X-rays were negative. The Angels were already short-handed at catcher. Jason Castro came out of Wednesday’s game after missing five games because of neck stiffness.

Giants: OF Austin Slater remained the designated hitter as he works back from a strained right elbow that has limited him from playing the outfield. He may need a couple of more days hitting only.

Angels: LHP Andrew Heaney (1-1, 4.74) gets another start against Oakland on Friday after taking a no-decision against the A’s on opening day. Heaney hasn’t beat Oakland since 2017.

Giants: RHP Logan Webb (1-2, 3.54) starts against the Diamondbacks on Friday.