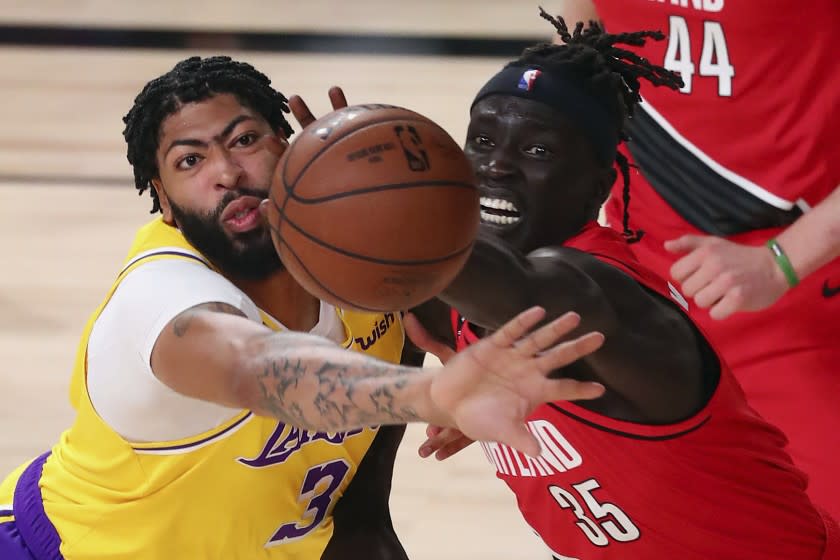 Before the Lakers took the court Thursday night, the warmup music took on a very old school vibe.

“Real Love” by Mary J. Blige. “ABC” by the Jackson 5. Songs by Puff Daddy, the Bee Gees and Soul II Soul played. They were songs from different eras and genres but one common theme — they all came from a time when it would have been unthinkable for the Lakers to go eight years, three months and two days without a playoff win.

That was exactly how long it had been.

The Lakers dominated the Portland Trail Blazers 111-88, recovering from a Game 1 loss with a blowout win. Kentavious Caldwell-Pope got his shooting touch back, Anthony Davis imposed his aggression, LeBron James exploited the double teams and the Lakers’ defense, for one night, broke a tired Trail Blazers team to even their series at a game apiece.

“Any time you’re not performing well your energy always changes, but with us we want to take away their confidence as early as possible because they can get going really quickly,” Davis said. “Especially Dame [Damian Lillard]. Him and CJ [McCollum] and Melo [Carmelo Anthony]. So we try to do as much as we can to limit those guys early.

“If they’re coming off to shoot, it’s gonna be a tough shot. You’re going to be in their face — if you make it then hats off to you, which they can. But we have to make sure we’re doing everything we can defensively to limit those guys.”

The Lakers set a franchise playoff record with 14 three-point baskets, and Davis became the third Laker to score at least 30 points in a playoff game in 30 minutes or less and the first since Kareem Abdul-Jabbar did it in 1987 against Boston.

“He was just aggressive,” James said about Davis. “From the beginning of the game, wasn’t passive at all looking for his shots. There were some that he missed early and he continued to look for his shot and he did a great job of offensive rebounding as well, getting some putbacks in that fashion.”

After his Game 1 performance, Davis was upset with himself. James gave him the space to be upset, but then he encouraged him.

“He said it’s one game and as a guy who’s won multiple championships and been in these situations before, he knows what to expect,” Davis said. “He knew what to expect from his teammates and he just was there for me to kind of encourage me and keep me level headed.”

The Lakers took an early lead and held tepid control over the Trail Blazers through the first quarter. Caldwell-Pope made his first three-pointer of the series with eight minutes to go in the quarter and immediately followed with another one.

“We’re playing scrappy,” Lakers coach Frank Vogel said. “We’re competing at a very high level. The care factor on the defensive side of the ball is where it should be to win in the playoffs. And we have tremendous, tremendous respect for the offensive firepower of the basketball team that we’re playing.”

The Lakers led by anywhere from six to 11 points for most of the second quarter until a 12-2 burst before halftime put them up by 17 at 56-39.

Third-quarter starts have been a problem for the Lakers lately, but that peccadillo did not appear Thursday night. They opened the second half with a 12-2 run and never looked back.

“It was just one game,” James said. “We wanted to execute throughout 48 minutes. We did a decent job of executing the first game besides the opening minutes and the first six minutes of the fourth quarter. That’s when they took advantage of us.