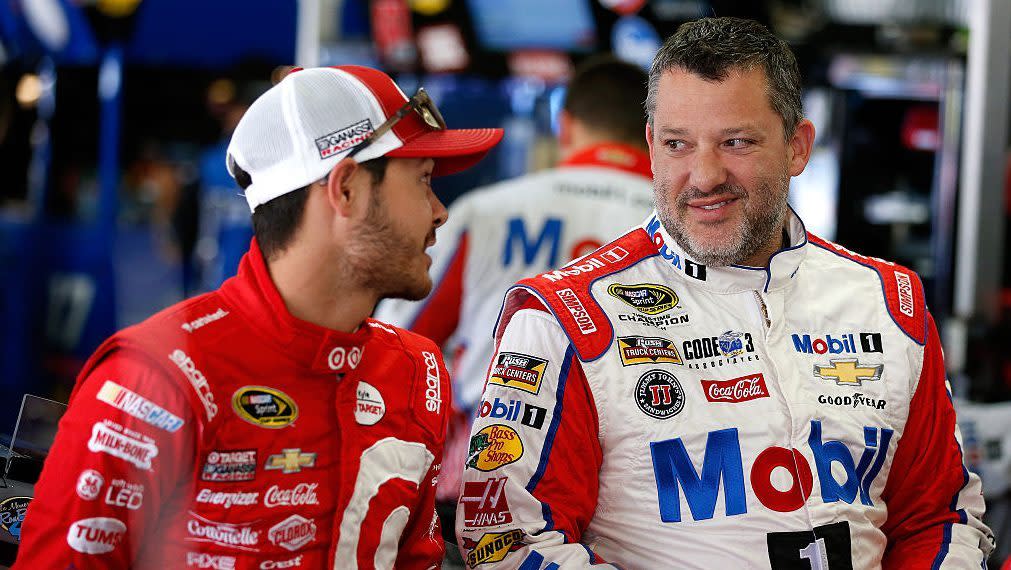 Stewart made the comment in an interview Wednesday with SiriusXM NASCAR Radio’s “On Track.”

Larson was suspended by NASCAR and fired by Chip Ganassi Racing in April after he used a racial slur in an iRacing event. Larson discussed what he’s done in the four months since in an exclusive interview with The Associated Press.

“I made a mistake and I’m paying for it and I accept that,” Larson told the AP. “NASCAR is where I always wanted to be and I do believe I proved I can compete at the Cup level. I’d like to get back there and we’ll see if there’s a way. All I can do is continue to improve myself and let my actions show who I truly am.”

NASCAR confirmed Wednesday that Larson has inquired about reinstatement but not made a formal request.

Larson must make the request to be reinstated.

With Clint Bowyer in a contract year as driver of Stewart-Haas Racing’s No. 14 Ford, Stewart was asked by SiriusXM NASCAR Radio whether Larson was an option for the ride.

“I feel like it’s time to get Kyle back in the sport,” Stewart said. “I think he’s paid his dues. I think he served his penalty as far as society is concerned. I think it’s time for NASCAR to let the kid have an opportunity to get back to where he belongs and that’s behind (the wheel) of a stock car.

“I think (Xfinity Series driver) Chase (Briscoe) has done such a great job with us. We have four great drivers in Cup cars now. We got Chase in an Xfinity car and definitely feel like that he’s getting himself into a position to where he’s going to be a Cup car very soon as well. We’ve got a full stable right now and I like the group of guys we’ve got, it’s just a matter of making sure we give them everything they need to get the job done.”

Since his departure from the sport, Larson has dominated the dirt racing circuit. He’s the first driver to win seven straight races in Stewart’s sprint car series.

Stewart also was asked about a report by Sports Business Journal that NASCAR team owners are advocating for a “significant number” of one-day shows for the Cup Series in 2021 due to financial concerns related to the pandemic.

Stewart said he’s “not opposed to it.”

“I definitely understand from the owner’s standpoint and I think it’s saving a lot of these smaller teams, it’s keeping them in business being able to just show up and run the race,” he said. “I think the results on track have been pretty good with it. When I found out (about the strategy of one-day events amid the pandemic), business wise I 1,000% agreed and understood. … I feel like the sport’s in a good spot right now. I definitely see why a lot of the owners want to go that direction. … I think what people don’t realize, even though we’re getting all these races in, the sponsorships that we have on these cars is not paying the bills like it was.

“The sponsors can’t activate at the race track, they can’t entertain their clients and customers at the track like they used to. So literally when you see the sponsors on the side of the car, we’re literally getting pennies on the dollar from these sponsors because a lot of these sponsors have had to cut back because of the pandemic as well.

“So everybody’s having to take, we’ll call it a haircut. Everybody’s having to take a little bit off. We can’t blame the sponsors for it, it’s just part of the pandemic. We’re all working with our sponsors, we’re all doing what we have to to take care of them. But from a business side we have to take care of ourselves too. I think NASCAR’s done a good job of doing these one-day shows.”

Stewart said one-day shows are not “the easiest thing for us to do” but financially, with teams not having to pay for three days of hotel costs, “it’s a very good thing for a lot of the teams to be able to just show up and race.”

Said Stewart: “Even when this pandemic stops and the fans are allowed to come back to the race track, it’s not going to fix the problems in the fallout from this pandemic for the owners and teams. It could take a couple of years before this gets back to normal 100%.”

Tony Stewart: ‘It’s time to get Kyle (Larson) back in the sport’ originally appeared on NBCSports.com