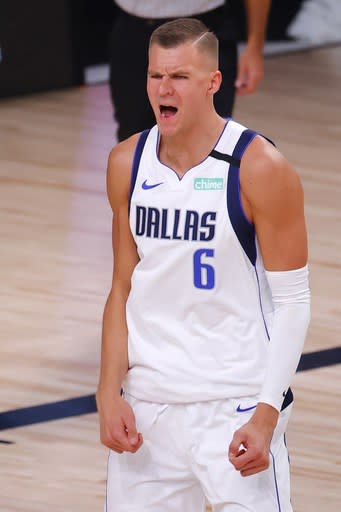 LAKE BUENA VISTA, Fla. (AP) — Luka Doncic has his first NBA postseason victory, though probably not the way he expected.

Instead of leading the Dallas Mavericks on the court, he was helping lead cheers from the sideline as his teammates pulled away while he sat.

Doncic scored 28 points and the Mavericks put together the pivotal run when he was out to beat the Los Angeles Clippers 127-114 on Wednesday night and even the Western Conference playoff series at a game apiece.

”This is how we’re going to have to win games,” Mavs coach Rick Carlisle said. ”Our depth is going to be a big part of it.”

Two nights after scoring 42 points in the highest-scoring debut in postseason history, Doncic played just nine minutes in the second half because of foul trouble. He finished with eight rebounds and seven assists.

The 21-year-old picked up his fourth foul less than a minute into the third quarter, shaking his finger toward the Dallas bench that he didn’t want to come out.

He stayed on then and, when he did come out toward the end of the period, Dallas put together a strong stretch of basketball. A finishing 14-4 spurt made it 98-85 entering the fourth.

And even after Doncic picked up his fifth less than a minute into the final period and had to go out again, the Mavs pushed the lead to 18 in the final 12 minutes.

Doncic said when he returned to the bench he was frustrated for about 15 seconds, then turned his attention to supporting his teammates.

”Being on the bench, it’s hard for me. I want to help my team but we won the game,” Doncic said.

Kristaps Porzingis added 23 points for the Mavericks. They beat the Clippers for the first time in five meetings this season and earned their first playoff victory since 2016.

Kawhi Leonard had 35 points and 10 rebounds, but Paul George had a mostly miserable performance for the second-seeded Clippers. They played without starting guard Patrick Beverley because of a calf injury.

With the top-seeded Lakers and Bucks looking sluggish in the bubble even before they both lost their playoff openers to No. 8 seeds, some betting sites had begun listing the Clippers as the title favorites.

They certainly look the part, having added Leonard and George in the summer and then some veteran pieces during the season. They helped the team compile some of the best offensive statistics in team history, but the defense wasn’t sharp and allowed reserves Trey Burke, Seth Curry and Boban Marjanovic to come off the Mavs bench and score in double figures.

”I just thought their bench outplayed our bench and our starters,” Clippers coach Doc Rivers said.

After falling behind 10-0 and 18-2 in the opener, Dallas was the team to start fast Wednesday. Doncic and Porzingis made consecutive 3-pointers for an 8-0 lead and Doncic hit another 3 that made it 15-2.

Lou Williams came off the bench and provided a quick spark, scoring 10 points in the period as the Clippers cut it to 29-25 after one. Dallas reopened a double-digit lead by scoring the first 11 of the second to make it 40-25 and led by 17 later in the period before Los Angeles got it down to 61-56 at halftime.

”We knew after the first game that we were right there and we could compete with probably one of the favorites to win it all,” Porzingis said.

George missed his first five shots before hitting a 3-pointer nearly four minutes into the second half.

Mavericks: Burke scored 16 points, Curry 15 and Marjanovic 13. … Porzingis was listed on the injury report in the morning because of right knee soreness.

Rivers wasn’t sure when Beverley was hurt, saying it was an injury that had been lingering. The Clippers noticed the guard wasn’t moving well at their shootaround and decided to scratch him. Rivers didn’t know if the injury could keep Beverley until the next game or until next week.