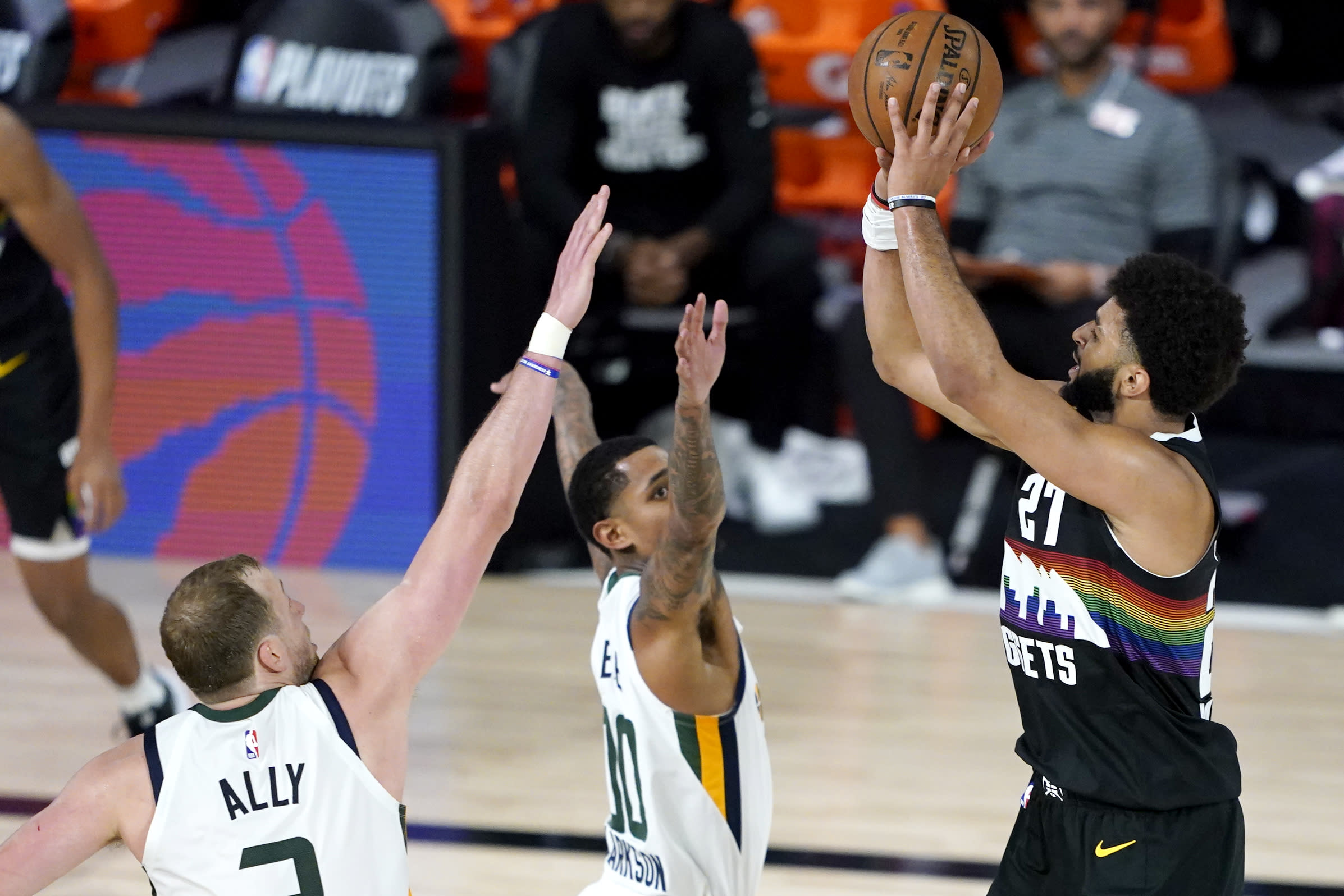 The four highest scorers from the NBA’s opening-day playoff games were all 23 years old or younger.

Donovan Mitchell’s 57 points are the most in the playoffs since Michael Jordan’s 63 in 1986. Luka Doncic’s 42 points were the most by anyone in a playoff debut and second among 21-year-olds to LeBron James’ 45 in 2006. Jamal Murray’s 36 points and Jayson Tatum’s 32 were career highs in burgeoning playoff careers.

It often takes an entire postseason to produce one or two 23-and-under 32-point scorers. We have gone years without anyone making the list. The last time a single postseason yielded four such scorers was 2015, when Anthony Davis, Kawhi Leonard, Bradley Beal and C.J. McCollum all hit that mark. It took them more than three weeks of playoff action to do it. Mitchell, Doncic, Murray and Tatum did it on Day 1 this season.

Prior to 2015, four 23-and-under players had not done it in a single postseason since 2002, when Kobe Bryant, Dirk Nowitzki, Tracy McGrady and Baron Davis all scored between 33 and 39 points in Round 1. That was the first time it had happened in a quarter-century. It has only ever happened four times in history.

We are witnessing an unprecedented collection of shotmakers.

It is not just that this NBA generation is producing young scorers with greater frequency than ever before or that the young talent today is scoring at a higher level than we have ever seen. It is how they are doing it.

They have seen all who have come before them, and they are incorporating their moves into ever-growing repertoires. They are hunting mismatches and splitting double teams. The midair hand switch that launched a Jordan highlight is in Murray’s bag of tricks. There are Euro-steps through traffic, floaters, fade-aways and hesitation pull-ups from the mid-range and step-back threes. Through contact there is strength and skill, footwork and force. The ball-handling is methodic, the releases quick. It is a basketball trainer’s Instagram reel come to life through a level of wherewithal, commitment and professionalism the NBA has never seen.

Take a second to watch:

Take a second to really watch.

They may not be inventing moves, but they are mastering them. NBA innovation is developing at the speed of technology in coordination with the information revolution. There is more data to comb, more film to study, all neatly wrapped. James Harden reinvents the step-back? A host of players add it over the summer.

And there is more money at stake. Investing in basketball as a craft is a lucrative business, and the tools are at their fingertips. Mitchell, Doncic, Murray and Tatum all work with independent trainers, as does everyone now. It was Jordan’s legacy with Tim Grover that was passed to Bryant, who left it for this latest generation.

In the final 5:07 of regulation in Monday’s overtime game between the Utah Jazz and Denver Nuggets, Mitchell and Murray combined for 27 points on 8-for-9 shooting (4-for-4 from three-point range). They assisted on the only other three field goals made in that span. The only two points of the final 35 scored by both teams in regulation not directly involving either were Nikola Jokic’s free throws following an offensive rebound of Murray’s only miss. For an entire clutch window, they were as close to perfect as you can be.

Doncic singlehandedly kept the Dallas Mavericks in Monday’s Game 1 with the heavily favored Los Angeles Clippers, if only because 25-year-old All-Star teammate Kristaps Porzingis was ejected on controversial grounds. After checking into a two-point game with 8:08 left in the fourth quarter, Doncic either scored or assisted on 17 of his team’s final 19 points, a scrambled Dorian Finney-Smith put-back the lone exception. The game only got away from the Mavericks when Tim Hardaway Jr. turned the ball over and Seth Curry missed a transition 3-pointer on the only two crunch-time possessions Doncic did not touch the ball.

Tatum scored 21 of his 32 points in the first half on Monday, staking his Boston Celtics to a 55-49 lead. He was content handing the reins to 23-year-old All-Star snub Jaylen Brown, who scored 17 of his 29 points after halftime. The two young wings combined for 61 points on 37 shots. And when the Philadelphia 76ers made it a one-possession game, the 6-foot-8 Tatum demanded the ball, ripped through Josh Richardson’s attempt to force him left, got to his spot and drew a foul resulting in a pair of game-sealing free throws.

This is not ball-hogging. This is brilliance. These are highly efficient one-man offenses in the biggest of basketball moments. Mitchell did not make his first field goal until the 4:28 mark of the first quarter, and Tatum made his last at the 7:17 mark of the third quarter. Their scoring comes within the flow of the game and when the moment demands it. The four young stars combined for 41 free throws (on 43 attempts) and 26 assists, and you get the feeling each of them can eclipse the 32-point benchmark again on Wednesday.