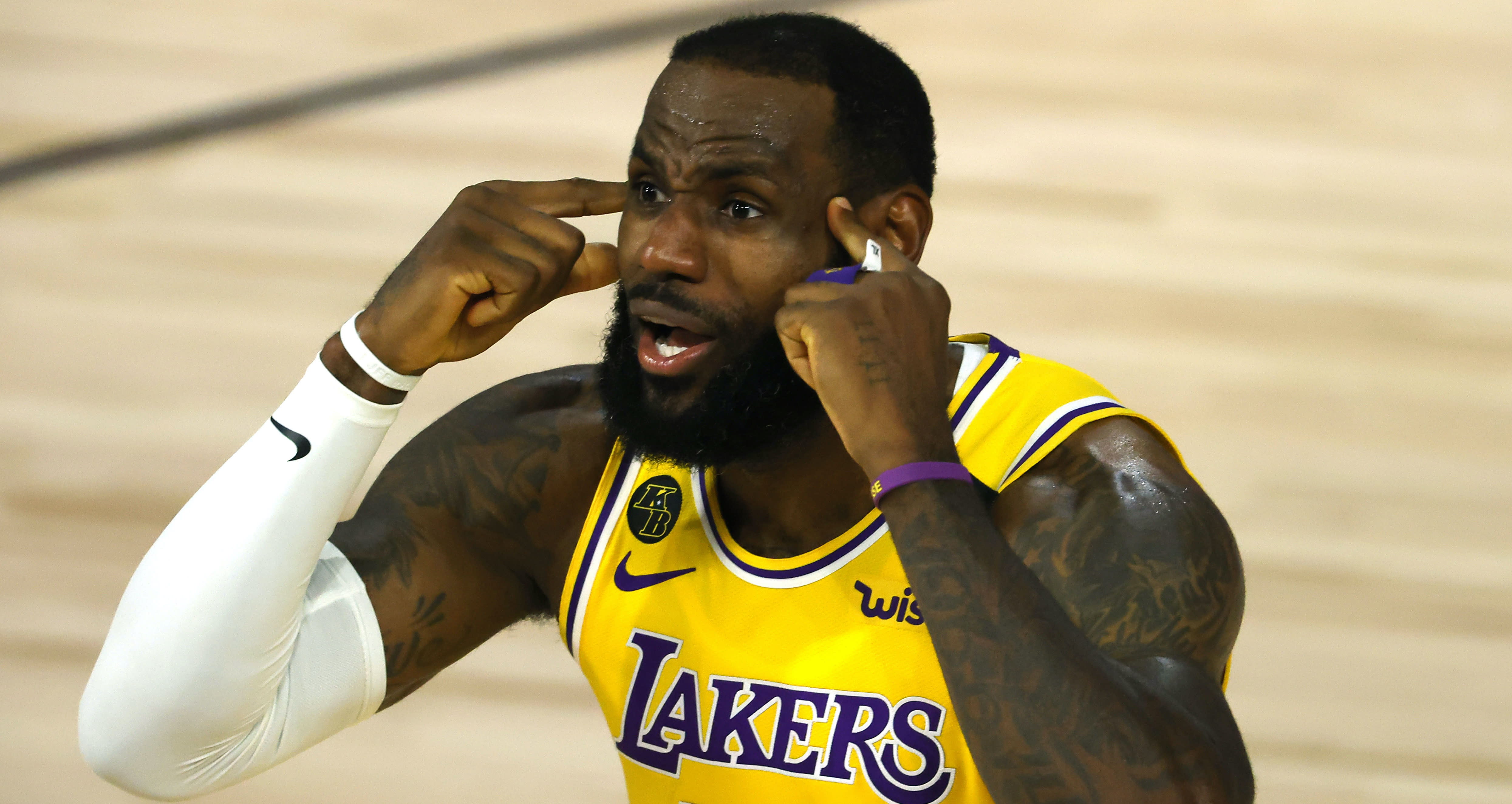 President Trump attacked the NBA last week, saying the league is in “big trouble” and blaming its supposedly poor ratings on the players kneeling during the national anthem to protest police brutality and racial inequality.

“It’s been horrible for basketball. Look at the basketball ratings. People are angry about it,” Trump said during an interview on Clay Travis’ radio show. “They have enough politics with guys like me. They don’t need more. There was a nastiness about the NBA and the way it was done. The NBA is in trouble. Big trouble.”

However, making a concrete assessment of the NBA ratings since re-start, or finding one single reason for their decline, is far from simple.

According to Nielsen numbers, NBA viewership (P2+) was down around 13% versus last season before the shutdown (prior to March 12). The first week of games since the re-start were down 4% from the NBA’s pre-corona average, however, primetime games on ESPN and TNT in that same time period were up 6% in viewership when compared with the first chunk of the season.

In fact, according to industry sources, NBA viewership post-shutdown is up 8% versus the prior year, when compared with spring 2019 end-of-season games. But it is worth noting that number is comparing the same games and windows as last season, meaning that it doesn’t take the afternoon or pre-primetime games the league has been forced to schedule into account, given that there are no direct comparisons.

“There is no proper context to compare the current NBA viewership post-COVID to any regular season,” says Tom McGovern, president of Omnicom Group’s sports media division Optimum Sports. “You’ve got an increased number of broadcast windows and start times that are an anomaly for this current season. The number of windows alone is going to dilute your average rating, you’ll have no West Coast prime time.”

Sources also point out that 8% bump is not as large as the spikes that other sports have been noting since re-starting. For instance, the NHL is up 57% versus the end of last year’s regular season, and MLB games so far this season are up 18% on last year.

It’s true that one might have expected the NBA’s numbers to rocket on its return, given how starved of live action sports fans were for several months.

The first night of bubble games was headlined by a mouth-watering encounter between LeBron James’ Los Angeles Lakers and Kawhi Leonard’s Los Angeles Clippers. The game was a nail-biter, yet the numbers (3.4 million viewers) were the lowest for any Lakers-Clippers game so far this season.

From the beginning of re-start, it became abundantly clear that NBA games weren’t necessarily going to hit the heights of an average regular season.

There are plenty of possible explanations for this, beyond the President’s hunch that it’s to do with the protests.

“Similar to the NFL when similar statements were made with Colin Kaepernick, we never really saw any direct indication of audience decline directly related to the protest,” says McGovern. “There are a lot of reasons why they had decline, but you couldn’t really say that was because of protests.”

One such explanation could simply be that folks just aren’t watching as much TV (at least not in the traditional cable and broadcast sense) this summer. PUT (People Using Television) levels have taken a much-documented tumble across the board board over the last couple months. So far this summer, PUT levels are down around 18% compared to the end of March and April, which is when these games would have been airing in a regular season.

“The biggest competition right now is summer. There’s a reason why most sports don’t play in July and August, it’s because PUTs are down and you’re competing with lifestyle,” McGovern says. “I would say anybody who’s looking at average rating and say it’s down or up would be irresponsible. There’s no context to it, there are no comparables.”

The packed schedule that the NBA has been forced into as a result of COVID could also be a contributing factor. Many of the games are being played in the early afternoon or late morning, depending on which coast you’re on, which obviously would not be the case normally. Take the the first round of playoff games which begin next week as an example. Just yesterday, the Utah Jazz and the Denver Nuggets tipped off at 10:30am PT, while later in the week, the Indiana Pacers and the Miami Heat will play the second game in their series at 10am PT on a Thursday.

No disrespect meant to those four teams, but does anyone really expect those games to draw a similar number of viewers than in primetime?

Looking at what happened in the season prior to re-start and the results themselves in Florida could also shed some light on why the NBA re-start hasn’t been a ratings slam dunk.

The Golden State Warriors, a team which no NBA fan needs reminding has dominated the league in recent years, and their eye-catching brand of basketball didn’t even make it to the bubble. Steph Curry and co. have been a reliable ratings banker for half a decade, but their miserable 15-50 season has surely cost the league ratings-wise, both before and after lockdown.

Then there’s the fact that the main aspirants to the Toronto Raptors’ NBA crown have thus far failed to build up steam in the bubble. The Lakers have gone 3-5 in the bubble, the Bucks 3-5, and the Clippers 4-3 (excluding yesterday’s playoff game).

Having no crowd at the games and low stakes for seeding places hasn’t necessarily made the NBA the kind of must-watch TV that it has been at times over the past few years. Perhaps when the business end of the competition begins, and if LeBron and Kawhi face off again when the chips are down, those numbers will pick up. Maybe someone should ask the President’s opinion on the matter?

Following that interview with Trump, Travis tweeted out numbers comparing the total viewership of Fox News shows, like Tucker Carlson and Sean Hannity’s, with the viewership from NBA games they went up against in the week of Aug. 10.

Dallas Mavericks owner and “Shark Tank” star Mark Cuban, who has been engaging in Twitter spats with Travis and other conservatives on the subject, countered by pointing out the NBA season would have been over almost exactly three months ago by now.

“You do realize that was the day Joe Biden picked Kamala Harris,” Cuban added in another tweet, referencing Travis’ comparison between Hannity and the Blazers-Mavs game.

While several Fox News shows may have beaten the NBA in the coveted 18-49 demographic on that same night, as Travis also pointed out, the league has been trouncing Fox News in the same demo on nights when the games have been broadcast in primetime on ESPN and TNT. In those time frames, the NBA has been 145% larger than Fox News in the younger demo.

But of course Fox News has been crushing the NBA in older demographics, and on, and on this whole argument could go. The point here is not only that we’re comparing apples and oranges, but also that it depends entirely on which way you slice the fruit.

“Why would I ever compare the two,” says McGovern. “There are certain marketers who find the Fox News audience important, or any other news audience, but those are not necessarily the same viewers, the same brands that are working with the NBA.”

The league’s numbers might continue to deflate a little, or they might rebound. The NBA’s less than stellar re-start numbers could be due in some part to the players’ protests, but it is both highly unlikely and impossible to prove.

One person who we know for certain will not be watching is the President, who previously said “what I do is personally turn off the game” when he sees the players kneeling.

However, Trump changing channels will certainly not make a huge dent in the NBA’s typical viewership, as LeBron James himself summed up nicely.

“I really don’t think the basketball community are sad about losing his viewership, him viewing the game,” James said during an interview week before last. “And that’s all I got to say.”