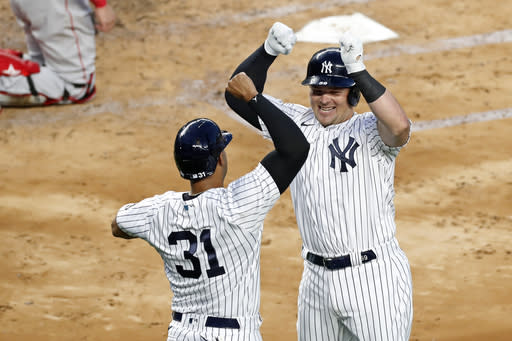 Luke Voit homered twice, Aroldis Chapman returned from the COVID-19 injured list to pitch the ninth inning and the Yankees beat the Red Sox 6-3 Monday night for their 10th straight victory in the famed rivalry.

New York capped a four-game sweep and is on its best run against Boston since winning a franchise-record 12 consecutive games in 1952-53 – a stretch when Williams was serving in the Korean War.

”When you bring up that name, obviously that’s a long time,” Yankees manager Aaron Boone said. ”Obviously it’s a stretch where we’ve had a few really good series against them. They’ve had some things not go their way against them. I don’t put a whole lot into it. We go onward and upward.”

The AL East-leading Yankees have won six in a row – despite injuries to Aaron Judge, Giancarlo Stanton and DJ LeMahieu – since dropping three of four at Tampa Bay from Aug. 7-9. They start a three-game home series against the second-place Rays on Tuesday night. New York is 10-0 at Yankee Stadium this season.

The Red Sox have dropped 10 consecutive games in the Bronx and are 1-15 at Yankee Stadium since blasting ”New York, New York” in the visitors’ clubhouse after eliminating the Yankees in the 2018 AL Division Series en route to a World Series title.

”I think the only thing I can tell is they have no rings, I have one,” catcher Christian Vazquez said. ”We beat them in the playoffs. I like my ring.”

Thairo Estrada and Aaron Hicks also homered for New York. Estrada connected shortly after the game was delayed 1 hour, 23 minutes by rain during the fourth inning.

Chapman allowed a triple to Jose Peraza and an RBI single to Jonathan Arauz but struck out Kevin Pillar and Rafael Devers to end the game. His final pitch was a 101.3 mph fastball that Devers swung through.

”I was really excited by what I saw just as far as his stuff,” Boone said.

Chapman was activated Monday after testing positive for the coronavirus during preseason workouts. The All-Star left-hander had only mild symptoms and has been training at the team’s alternate site in Scranton, Pennsylvania, since being cleared July 31.

It was Chapman’s first appearance since allowing a series-ending homer to Houston’s Jose Altuve in Game 6 of the AL Championship Series.

Luis Avilan relieved Montgomery after the delay, walked Michael Chavis to load the bases and struck out Alex Verdugo to end the inning.

New York broke through in the second. Hicks scored speedy Tyler Wade from first on a double, and Voit followed with a drive to left-center for a 3-0 lead.

Voit added a leadoff shot in the fifth, his seventh home run of the season. Hicks homered leading off the seventh to make it 6-2.

Torres made two throwing errors at shortstop and skipped another ball that Voit picked out of the dirt at first base. The 23-year-old has six errors, most among shortstops, in his first season replacing Didi Gregorius at the position. Torres also has had a few miscommunications with infielders in the past week.

”I think he’s doing well overall,” Boone said. ”He’s had a couple of hiccups game-wise that have dinged him statistically.”

Meanwhile, left fielder Andujar – a converted third baseman – got turned around by Verdugo’s line drive in the sixth and watched it bounce over the wall for a ground-rule RBI double.

”That’s going to be a tough play for even a really good outfielder out there,” Boone said.

Red Sox: LH reliever Josh Taylor was activated after testing positive for the coronavirus July 15 and pitched a perfect sixth inning. RHP Chris Mazza was optioned to the alternate site. … INF Christian Arroyo, claimed off waivers from Cleveland on Thursday, could be activated Tuesday if he clears intake coronavirus testing. … Vazquez has a sore right heel and wanted to see how he felt Tuesday before committing to playing.

Yankees: LeMahieu is expected to miss two to three weeks after going on the injured list Sunday with a sprained left thumb. … RHP Ben Heller was optioned to the alternate site.