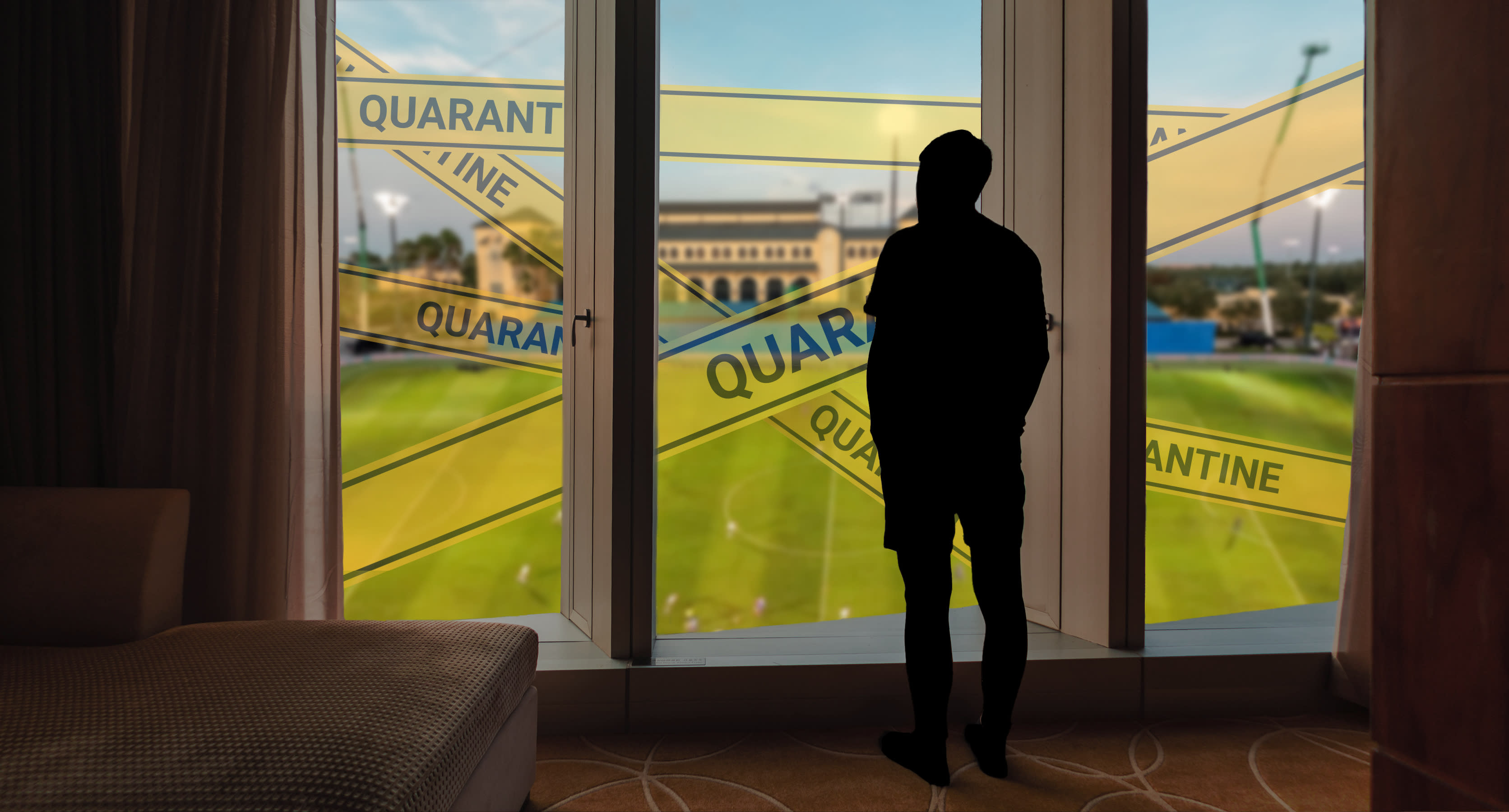 He received the news over FaceTime. The following morning, nurses in hazmat suits arrived outside his door. And on an early-July day he won’t forget, at a Walt Disney World resort he didn’t see much of, he packed his belongings and covered himself head-to-toe. He trudged up to the 14th floor of his hotel. He already missed fresh air. He now knew he’d go two weeks without it. Because he — an FC Dallas player who agreed to speak with Yahoo Sports anonymously — had tested positive for COVID-19.

We’ll call him David. He half-expected the news when it came, just days before the MLS is Back Tournament. Symptoms had begun to stew. “Some body aches,” he says. “A fever. Some night sweats. But a lot of other teammates had it worse.” Ten ultimately tested positive for the coronavirus in Florida. The team had to withdraw from the tournament. Players spent much of their two-week bubble adventure in quarantine. They sat in mostly barren hotel rooms, watching the rest of the league march on without them.

They returned to Dallas in mid-July, and will finally play competitive soccer on Wednesday. David says he’s recovered, physically and mentally. He’s match-fit. But those 10 days with little human contact, with no sun, with no soccer ball, with no exercise, took their toll.

Coronavirus outbreaks continue to disrupt sports at every level in the United States. Case numbers and cancellations make headlines. Beneath them, however, is a human experience that David’s story illuminates.

David still remembers the week everything screeched to a halt. He remembers looking at his phone on the night of Wednesday, March 11, to learn that the NBA had suspended its season. The following day, FC Dallas gathered for training. “Someone came onto our field and told us,” David says. MLS was shutting down, too. The team’s flight to New York City: canceled. Their strong start to the season: interrupted. Players lingered, talking, parsing uncertainty. They had no idea when they’d next train as a group.

They passed the subsequent weeks and months as we all did, waiting out the storm, holding weekly Zoom calls. They wondered who to talk to, what to do. They sought open green spaces; activated GPS monitors; trained alone, just them and a ball, or them and a fitness regimen. In May, they returned to the team facility in Frisco. “You would literally have your own quadrant of the field,” David recalls. “The coaching staff in the middle of the field. Four to a field. And the coach would give out orders.” Players would comply.

But by the time they departed for the MLS bubble, their own bubble had already been infiltrated. One player tested positive for COVID-19 in early June. Two more reportedly tested positive toward the middle of the month. When the squad boarded its flight to Florida, there was excitement but unease.

And one more the next day.

The team trained, but minds were elsewhere. “I was worried for my teammates, for me, for my coaches, for the staff that’s not involved,” says rookie midfielder Tanner Tessmann. After two sessions, practice shut down. Every morning, players would get swabbed.

“Then we’d wait, wait, wait,” David recalls. “Everyone was paranoid, just kinda waiting to see. The results would take 8-12 hours.” An athletic trainer would personally inform anybody who’d tested positive. A coach would give numbers, but not names, to the group. Infected players would usually come forward on their own terms in a WhatsApp chat. Teammates would fill their ears and inboxes with support.

Their tournament, meanwhile, was supposed to start July 9. Soccer, though, drifted further from their heads. “Soccer was the last thing I wanted to do,” David says. Especially after he tested positive; after nurses brought him a hazmat suit; as they led him up to the 14th floor, where the infected players were housed, where the windows wouldn’t open, where he’d be stuck for 10 days.

Back on a lower floor, uninfected players settled into an anxiety-filled routine: wake up, breakfast, testing, and team workouts over Zoom. “They were weird,” Tessmann says. And fun, in a way. But tough. There were push-ups, core circuits, squats, other body-weight exercises. Chairs and towels were involved. They tried running 10-yard sprints in hotel rooms. Some rooms smelled repulsive before long.

Downtime, then lunch, then more downtime was next. Players perused social media, and saw the amenities a couple hundred yards away: pools, golf courses and beach volleyball courts; teqball tables, cornhole and human-size chess boards. They couldn’t partake in any of it. Some players asked for soccer balls, and juggled in their rooms. Many watched MLS games on TV at night. That was “tough,” Tessmann admits.

But the decision to withdraw from the tournament, players say, brought “relief.” They’d been in quarantine for over a week. With competition out of the picture, they could focus on themselves, on each other. Infected and uninfected players FaceTimed. The coaching staff kept the squad united over Zoom. “Tough times don’t last, but tough people do,” head coach Luchi Gonzalez said. He marveled at players’ and staffers’ mental strength and togetherness. By the third week of their stay, the mood lightened. Players moved to rooms with balconies, overlooking a luxurious courtyard. They surveyed the green grass, and shimmering water, and palm trees, and calm. They sun-bathed, and chatted, and joked about Cheez-Its, and fed scraps to birds down below. Midfielder Paxton Pomykal dubbed them the “balcony bros.”

As the end of the 10 days neared, nurses would stop by for checkups that were as much mental as physical. It was the only direct human interaction David could have. When his quarantine lifted, he “went back down to where the normal people were,” as he puts it. His new room had a balcony. “So I ran right to my balcony,” he recalls. “It was hilarious. It was great. My teammates were in the rooms next to me. And they saw me come out, screaming.”

On the flight back to Dallas, at the end of the weeks-long ordeal, David leaned back and flipped on a movie. “Just total relaxation,” he says now. When he finally reached his apartment, he sunk into his bed. He munched on fast food. He didn’t do much for a couple days. “It was so nice to be home,” he says.

He felt tired, physically and mentally. “I think it was just the nature of me being in a hotel room, not doing any physical activity for 10 days straight,” he says. “And then I think the virus does take a toll on your body.” When training resumed, “it took me maybe a week or two to get back to myself.” To get back in shape, but also to “comprehend what just happened, how did it happen, that it actually happened. That’s the thing people don’t know, how hard it can be mentally.”

But distress, gradually, wore off. FC Dallas endured. Players returned to training, occasionally at their stadium; and to semi-normalcy. To get back to soccer, to sweat, to feel the ball, to feel in control, “was a great moment,” Tessmann says. “To be out there, just to play, and have joy, and re-learn why we love the game.”