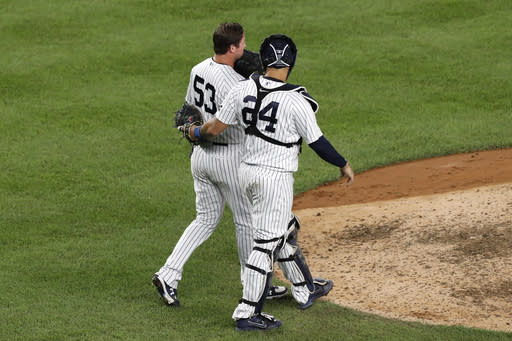 ”Nobody wants to get skipped. I want to be out there and pitch every five days. I feel like I should be,” Happ said, explaining matter-of-factly the second talk did not go well. ”There was no argument, and nothing bigger than that. It was just I didn’t expect it, I guess.”

”I thought it was probably the best life we’ve seen at the top of the zone since even going back to spring,” Boone said, ”really dictating counts and and dictating the pace of everything.”

Happ (1-1) made his first appearance since Aug. 5, giving up Kevin Pillar’s home run down the left-field line in the third. He has a 6.39 ERA over three starts and 12 2/3 innings, and likely has eight starts remaining at most in the shortened season. His contract includes a $17 million option for 2021 that was to be guaranteed for either 27 starts or 165 innings, which becomes 10 starts or 61 1/3 innings.

”That’s a subject I think I’m just going to stay away from right now,” Happ said. ”All in maybe due time on that front.”

Happ focused on being aggressive, and he ended a five-start regular-season winless streak by getting his first victory since beating Boston last Sept. 7. He improved to 12-4 against the Red Sox by winning his fifth straight decision against them.

Hours after second baseman DJ LeMahieu joined Aaron Judge and Giancarlo Stanton on the injured list, Ford put New York ahead when he dumped an RBI single into short center field in the first inning, then gave the Yankees a 4-1 lead with a two-run homer off Chris Mazza (0-1) in the third. Ford exchanged a string of non-socially distanced fist bumps with teammates.

”I think that a lot of young players put a little bit too much stress on themselves at times with those opportunities,” said Ford, a left-handed bat who backs up Luke Voit at first. ”It’s not really about the playing time. It’s more just kind of controlling your emotions when you do get that two-week stint where you can try to prove what you can do. ”

Boston has been outscored 67-31 during a seven-game losing streak, dropping to an AL-worst 6-16. In the midst of a skid equivalent to 19 straight losses in a normal season, Boston held a team meeting in an outdoor space at its hotel before the game, then went 0 for 6 with runners in scoring position.

”Anytime you grab the team together and give guys the opportunity to speak what is on their mind is good,” manager Ron Roenicke said. ”Sometimes it comes out right away where it makes a difference and most of the time it doesn’t.”

Adam Ottovino, Chad Green and Zack Britton finished the five-hitter, with Britton earning his big league-best eighth save in eight chances. He misplayed a two-out grounder for an error that allowed an unearned run, then struck out Kevin Plawecki with a man on.

LeMahieu, the AL batting leader with a .411 average, sprained his left thumb while swinging at a pitch Saturday. Scans did not show a break, but the Yankees don’t want to announce a prognosis until after the records are examined by a hand specialist who worked with LeMahieu two years ago. Judge, who went on the injured list last week with a straight right calf, said he expects to be activated Saturday at the New York Mets.

Aaron Hicks, moved to leadoff in LeMahieu’s absence, had an RBI double in the second inning on a ball that was headed for first baseman Michael Chavis but hit the base and bounded into right field.

Boston is off to its poorest start since 1996 and its 6.03 ERA is the highest in the major leagues.

”You start to think about all the external factors,” Pillar said. ”We still got a ton of games left and we’ve got to stop feeling sorry for ourselves.”

Yankees catcher Gary Sanchez went 1 for 4, ending his streak of home runs in three straight games. He took a called third strike from Ryan Brasier that stranded the bases loaded in the seventh.

Yankees: 3B/OF Miguel Andujar was recalled from New York’s alternate training site at Scranton to take LeMahieu’s roster spot and probably will start Monday. … Closer Aroldis Chapman likely will be activated Monday after recovering from COVID-19, which delayed his season.