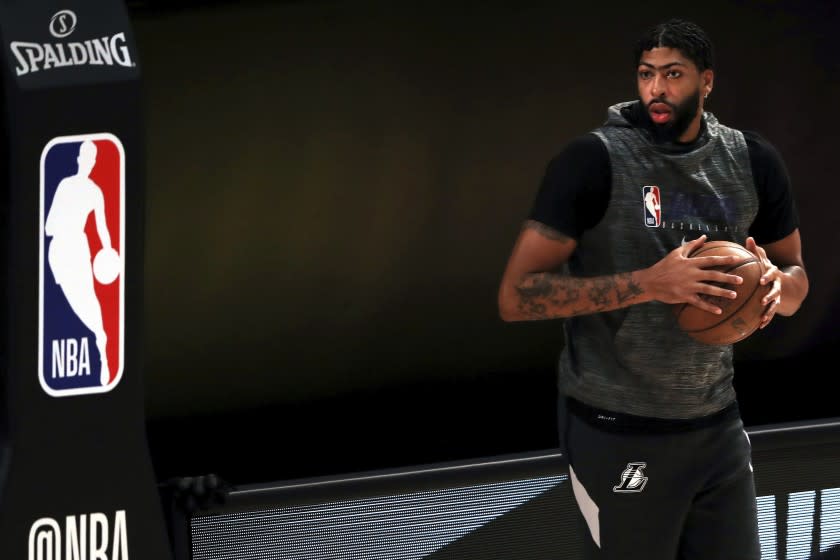 Back when he was a member of the New Orleans Pelicans, Anthony Davis made the playoffs twice and advanced past the first round just once. His team was always the underdog. In 2018 they shocked the league by sweeping the Portland Trail Blazers, a six seed sweeping a three seed, in the first round.

Now Davis will face Portland again, only this time his team isn’t even close to being the underdog. That comes with pressure. A pressure that’s more acute here in the bubble as the Lakers face the league’s hottest team.

“They were playing well,” Davis said. “They’ve been playing extremely well. They did everything in their power to make the playoffs. They’re a good team. They’re hot right now. It’s definitely going to be a test for us but a good test. We’re going to be ready to go out there and compete.”

On Sunday the Lakers held their first practice since learning the identity of their first-round opponent. Portland secured the eight seed Saturday by beating the Memphis Grizzlies, then the Trail Blazers held a light day on Sunday. The Lakers, meanwhile, spent Saturday focusing mostly on their own issues. On Sunday they turned their attention to the Trail Blazers as they prepared for the start of the playoffs. In subtle ways, coach Frank Vogel could see a shift.

“Seriousness and the level of detail attentiveness,” Vogel said. “The communication in our film session — it’s not just the coaches presenting a plan. There’s a lot of questions, there’s a lot of ‘let’s get clear and on the same page,’ pointing out different aspects of what we’re showing. Those types of things.”

Normally the eighth-seeded team isn’t one that has as fierce a backcourt as Portland does with five-time All-Star Damian Lillard playing alongside talented scorer CJ McCollum, nor a 10-time All-Star in Carmelo Anthony still capable of producing when the team needs it.

“Them guys are tough,” said Kentavious Caldwell-Pope, who watched Saturday’s game between Memphis and Portland after he finished practice. “They had a tough battle, Memphis gave them a good fight, but Portland pulled it out. They’re a great group of guys. We’ve got to be prepared. I definitely believe in my group, definitely gonna be prepared and ready.”

Caldwell-Pope will have his hands full with Portland’s backcourt — a role thrust upon him when Avery Bradley opted not to join the Lakers in the bubble.

But Portland wasn’t whole for any point in the season, and that particularly impacted their big men. Center Jusuf Nurkic missed an entire year due to a severe fracture in his leg. Had the playoffs happened in April as scheduled, it’s unclear just how impactful Nurkic would have been, but now he enters the playoffs five months after he was set to return.

“We have to focus on the nine games that they played here in the bubble, while still looking at what we did do to get those wins against them during the regular season,” Davis said.

There’s pressure to the position he’s in now, as a star player on the top-seeded team.

“I’m fine with it,” Davis said. “It’s no problem for me. Makes it a little bit more exciting more fun to go out. More exciting for me to go out and try to compete and all the pressure that people talk about for our team, just try to go out there and prove them wrong.”