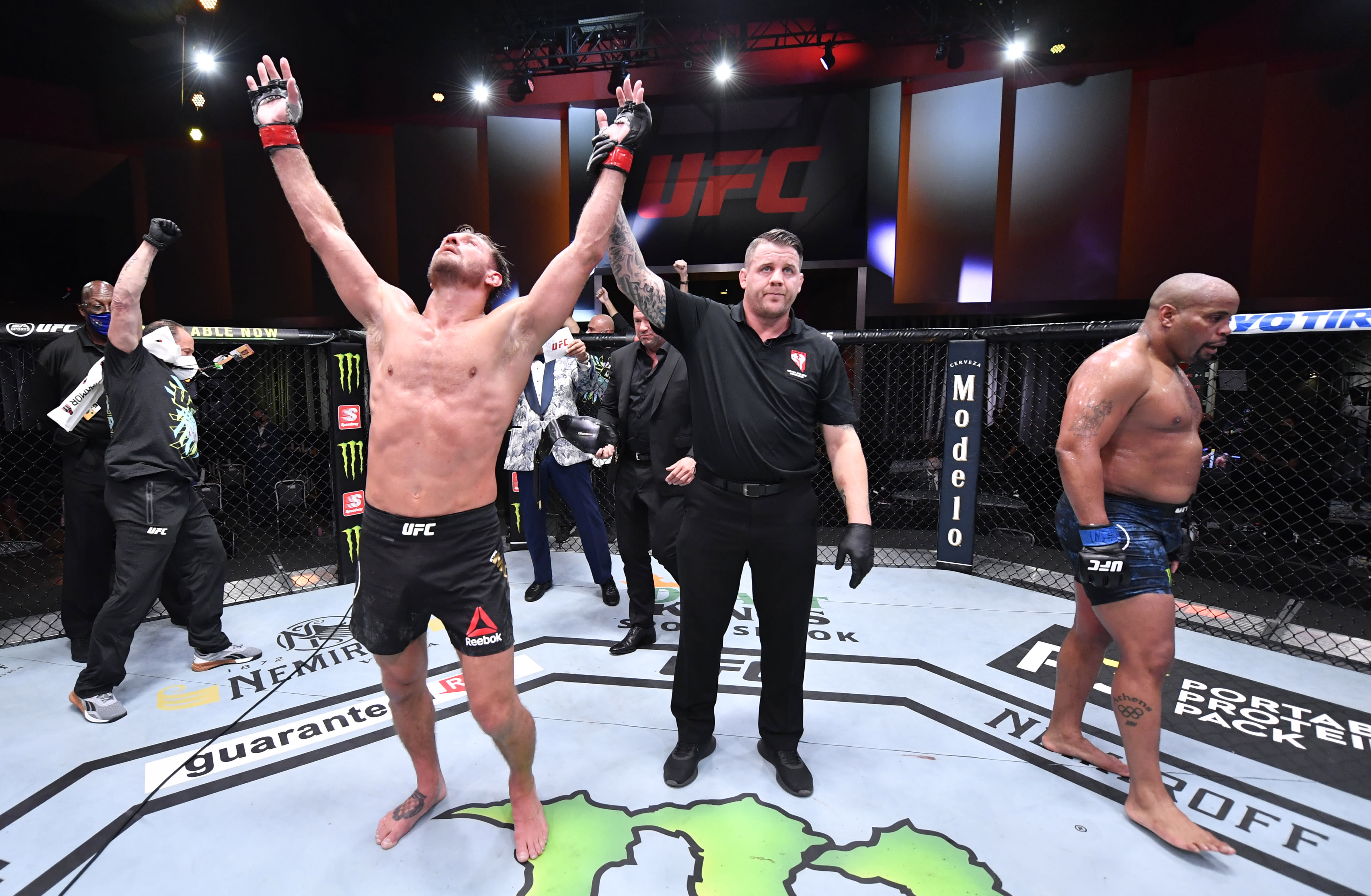 Miocic is the greatest heavyweight in the sport’s history by a razor-thin margin, and Cormier doesn’t really need to retire.

Miocic eked out a unanimous decision victory Saturday in the main event of UFC 252 at Apex, doing just enough to win by scores of 49-46 twice and 48-47, according to the judges.

That allowed him to retain the UFC heavyweight title and add the highly unofficial moniker of greatest heavyweight ever.

It was a classic fight that, despite the lack of fans who would have only added to the atmosphere, left UFC president Dana White beaming.

“Both guys got poked in the eye; both guys got rocked, both guys fought their hearts out,” White said. “That was an incredible heavyweight championship fight. People were saying me they were in a bar and the bars were packed. My son [Dana White III] is going to USD [University of San Diego] and has a place down there on the beach. He said people were lined up on the boardwalk looking in his window watching the fight. It was one of those heavyweight championships that felt big.”

Even though Miocic entered as the champion, much of the pre-fight focus was on Cormier because he said he planned to retire. He repeated it numerous times during the fight’s build-up, including at the final pre-fight news conference.

He was poked badly in the eye Saturday and was taken to a local hospital for examination, so he did not attend the post-fight news conference. But when he was interviewed on the ESPN broadcast, he said he’d only fight again if it were for a championship.

So he left the door open a crack.

Miocic had nothing but praise for his rival, whom he defeated in their last two bouts.

Miocic was engaging and funny at the post-fight news conference, joking about fighting a reporter who mocked his beloved Cleveland Browns, but when he spoke of Cormier, it appeared to be from the heart.

“He’s an amazing fighter and I wish him nothing but the best,” Miocic said. “He’s an amazing ambassador for the sport. He’s a great commentator. I never had a problem with the guy.”

Miocic and Cormier went at each other with ferocity in each of their three bouts. Cormier knocked Miocic out at UFC 226 in 2018 to win the title, but Miocic turned the tables at UFC 241 last year to reclaim the throne.

Saturday’s bout was essentially a referendum on the history of heavyweights.

They’ve each beaten a who’s who of the sport’s best, but because of the pandemic, their bout was held inside a sterile, empty building with no fans.

Because Cormier is so widely beloved, Miocic joked that he didn’t mind having no fans there.

“That’s a tough question,” Miocic said, beaming, as he pondered how to talk about the lack of fans. “I think about that a lot. Usually when I walk out, they’re yelling at me, ‘You [expletive] suck.’ It’s kind of nice not to hear that. But listen, if it weren’t for the fans, we wouldn’t be here. We have such an amazing sport because of the fans.”

It’s also amazing because fighters like Miocic and Cormier are so willing to give of themselves in pursuit of victory. When the fight wound down, both men were physically exhausted, having given all they had. But they both made that last little push, and when the horn sounded to end their rivalry, both raised their hands skyward.

Miocic said he went for it in the fifth because he didn’t want to take a chance on how the judges would score it, but he was confident he had done enough to keep his belt.

He said he wants to spend time with his family, but then be more active than he’s been in the last several years. For Cormier, while it may be the end of the line as an active fighter, he still has a lot of projects going.

He’s become the UFC’s lead analyst, coaches the Gilroy (Calif.) High School wrestling team and said he’ll continue to help coach at the American Kickboxing Academy in San Jose, where he trained for his entire career.

White couldn’t say enough about him. Cormier never turned down a fight, never caused any problems and promoted the sport like few others have done.

“The best,” White said when asked about working with Cormier. “He’s been the best guy to work with. He’s easy. He wanted to fight everybody. He was willing to do anything. He’s a great guy. He’s a great ambassador for the sport. It’s been fun. Me saying he won’t retire is me kind of hoping he doesn’t retire.”

Jairzinho Rozenstruik, who knocked out Junior dos Santos on the undercard, said what most everyone was thinking.

“Those guys for sure deserve to be considered the greatest of all-time,” he said.

They’re both normal, humble, easy-going guys who happen to have this rare gift for beating people up.

Miocic was just a little better and so he’ll be remembered as the best ever.

Know this, however: Cormier may have exited the stage, but he’s hardly been forgotten. He’ll be remembered for as long as this sport continues to exist. Few ever did it with the skill, the style and the class as he has done it.

He’s one for the ages.