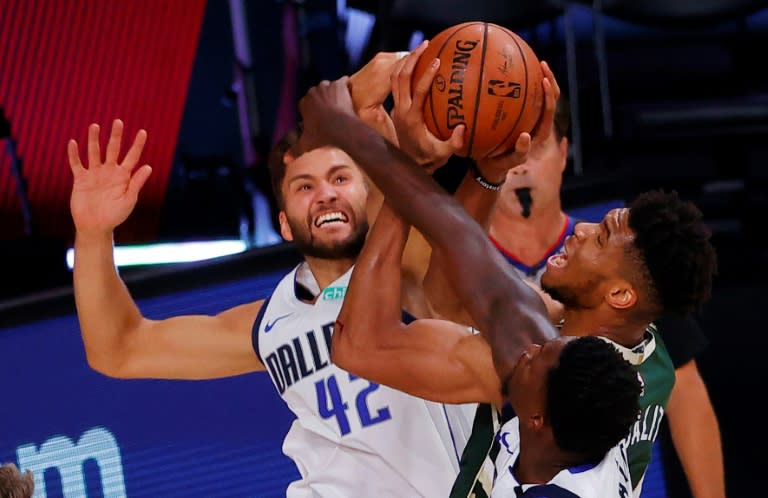 An NBA season unlike any other shifts into high gear on Monday with the start of the playoffs in the league’s quarantine bubble in Orlando, Florida.

In a season reshaped by the coronavirus pandemic, home court advantage is just a memory.

Fans are banned from the campus where the league has so far successfully operated without a positive COVID-19 test. But the price is that players know that the deeper their teams’ playoff run the longer they remain isolated from their families and friends.

“This is going to be the toughest championship you could ever win,” Milwaukee Bucks star Giannis Antetokounmpo, the reigning Most Valuable Player, said as the NBA assembled in Orlando in July to resume a season halted in March.

“Whoever wins this year really had to go get it and earn it, and had guys who took time off seriously and still stayed in shape, and was able to get back the chemistry, true chemistry,” Rivers said.

Antetokounmpo’s Bucks arrived at the bubble virtually assured of the top seed in the Eastern Conference and own the best record in the league as they head into a first-round meeting with the Orlando Magic.

The Bucks beat the Magic in all four of their regular season games, but they’ve produced a lacklustre 3-5 record in the restart — an admitted frustration for Antetokounmpo, who still believes Milwaukee can return to their dominant form.

“Now it’s playoff time,” Antetokounmpo said. “I definitely don’t believe in the turn-on switch that everybody talks about, like we can turn on the switch and be great, but I do believe that if everybody is on the same page and if everyone is focused and get together … I believe we can play way, way better.”

The Western Conference-leading Los Angeles Lakers, back in the playoffs for the first time in seven seasons, have also gone an unimpressive 3-5 in seeding games.

LeBron James, Anthony Davis and company — inspired this season by the memory of Lakers great Kobe Bryant who died in a helicopter crash in January — will be up against battle-hardened Portland.

The Trail Blazers won four straight down-to the wire games — including an extra play-in game against the Memphis Grizzlies — to seize the final playoff berth in the West.

The reigning champion Toronto Raptors are back in the playoffs despite losing Finals MVP Kawhi Leonard and starter Danny Green after their title run.

They’ll be taking on a Brooklyn Nets team that has gone 5-3 in the bubble and notched wins over the Bucks and the West’s second-seeded Los Angeles Clippers.

“They’ve got a lot of guys who are playing with a lot of energy and a lot of confidence right now,” Raptors coach Nick Nurse said. “We will have to play really well to beat them.”

Other Eastern Conference matchups pit the Philadelphia 76ers against the Boston Celtics and the Indiana Pacers against the Miami Heat – both rivalries with the potential for fireworks.

The 76ers beat the Celtics in three of four regular-season games, but with Aussie star Ben Simmons sidelined with a knee injury and Cameroonian big man Embiid looking less than his best so far in the bubble the Celtics could have an opening.

In the West, the Clippers have Leonard trying to follow up his title run with Toronto with another championship campaign.

Leonard, Paul George and a talented surrounding cast will have their work cut out to contain the Mavericks’ potentially explosive offense led by Luka Doncic and Kristaps Porzingis.

The clash between division rivals Denver and Utah could well go the seven-game distance, as evidenced by the closely-matched teams’ double-overtime thriller during the seeding games that was finally won by Denver.

With the San Antonio Spurs missing the playoffs for the first time since 1997, the Houston Rockets’ eighth straight post-season appearance gives them the longest active streak in the NBA.

In the first round they’ll face an Oklahoma City Thunder team that appeared headed for a lacklustre rebuilding phase when it traded Russell Westbrook to Houston for veteran point guard Chris Paul.

But Paul has helped the Thunder to the same record as the Rockets, who could find the going rough in the first round with prolific point guard Westbrook out indefinitely with a right quadriceps strain, likely leaving star James Harden to shoulder the offensive load.

Nevertheless, Rockets general manager Daryl Morey remained bullish on his team’s chances in “one of the most exciting moments in NBA history.

“We have a historic situation we’re all facing,” Morey said. “I count eight teams that can win it. When does that ever happen? It’s exciting — and I think we’re one of those teams.”