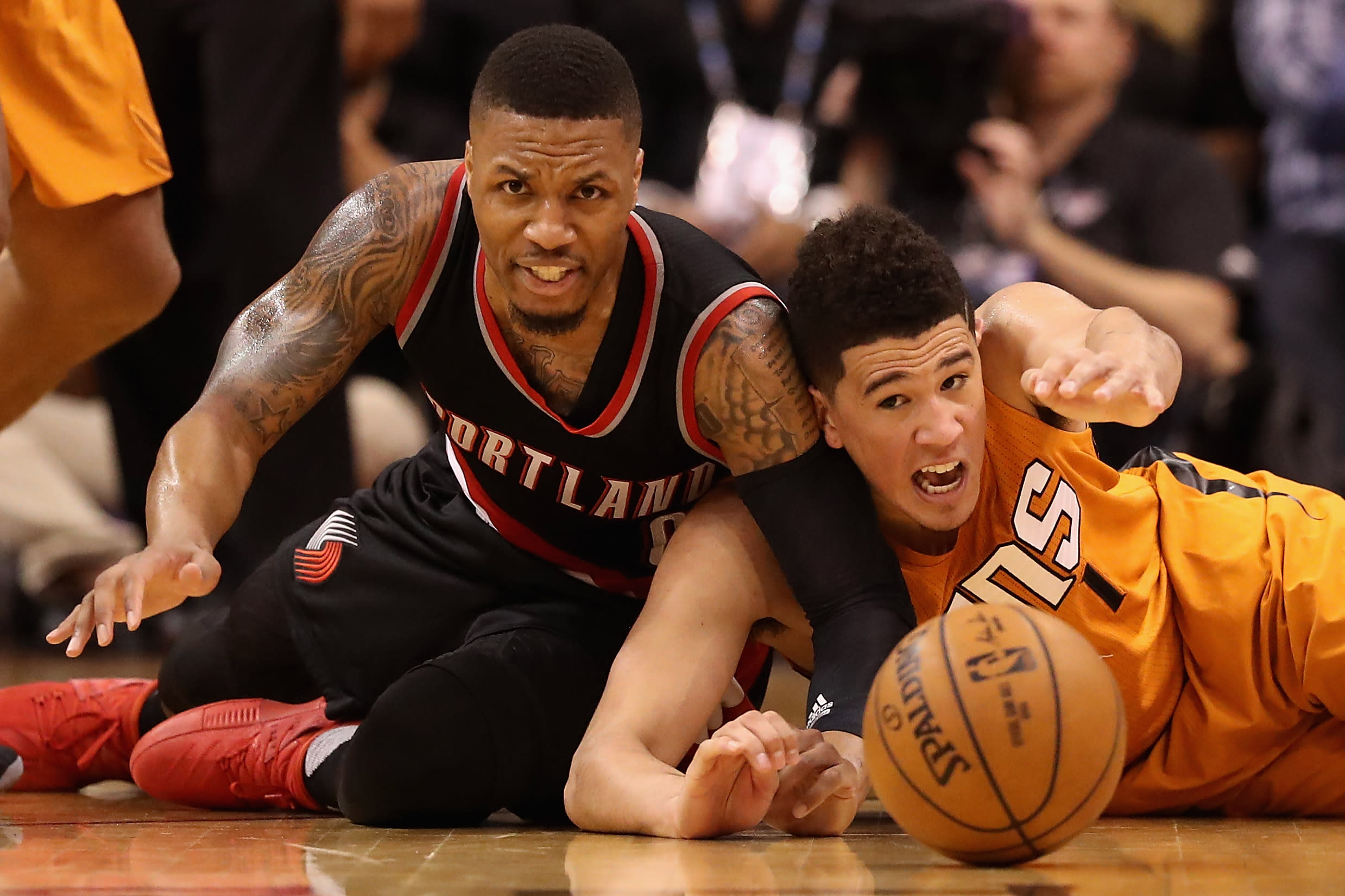 The NBA will announce two All-Seeding Games teams and a Player of the Seeding Games prior to the start of Game 1 of the Western Conference play-in series Saturday afternoon. There is no precedent for this, and let us hope there is never one again, so there is no guideline for how those teams should and will be picked.

We do know the awards will be voted on by a panel of sportswriters and broadcasters on site in the Orlando bubble. I am not one of them, but I refuse to let that stop me from forcing my terrible takes on you.

These picks are based on what I’ll call The Spirit of the Bubble. You get bonus points for playing your backside off — in meaningful or meaningless games, but especially with playoff contention and seeding on the line. And even more points if you played every game in must-win mode. If you owned a night over this two-week enterprise, you warranted consideration. If you stole the show entirely, you are in. And you lose points for mailing it in or head-butting dudes. Narratives are as important as statistics in Walt Disney World.

Feel free to let me know who else belongs on this list. This is supposed to be fun. Without further ado …

Lillard played every game of the restart under enormous pressure and came as close to perfection as possible. He sparked a 24-point comeback to steal a fleeting lead in the final two minutes of a loss to the Boston Celtics and missed two potential game-winning free throws with 18 seconds left in a loss to the Los Angeles Clippers. Those were Portland’s only blemishes. Lillard responded to his missed free throws with 154 points in his final three games, putting the Blazers in the driver’s seat for the West’s final playoff seed.

Booker’s inspiring effort almost defied the odds. Nobody gave the Suns a chance. They had no business even being in Orlando, and yet they finished 8-0, coming within a Caris LeVert game-winning attempt of making the play-in series. Granted, Phoenix had some schedule luck, but the franchise had not won more than six consecutive games since Steve Nash led them to 10 straight in 2010. The Suns would have been toast without Booker — specifically, his buzzer-beater over Clippers stars Paul George and Kawhi Leonard.

When you are drawing favorable comparisons to Larry Bird at the age of 21, you are doing everything right. Doncic’s 34-20-12 triple-double in a win over a Sacramento Kings team that passed on him with the No. 2 overall pick in the 2019 draft was his masterpiece. The Mavericks entered the bubble with the NBA’s best-ever offensive rating, and they have been better in Orlando, scoring 117.4 points per 100 possessions. The defense needs work, but Doncic is a pace-setter who looks like a future MVP — sooner rather than later.

There is no bigger surprise in the bubble than Warren, who is the reason the Pacers have held onto the fifth seed with two laboring All-Stars. Domantas Sabonis has missed the entire restart with a foot injury, and Victor Oladipo has been restricted as he works his way back from a devastating knee injury. A 20-point scorer for Indiana this season, Warren erupted for 53 in a statement win over the Philadelphia 76ers in the Pacers’ re-opener. That victory kept the Sixers at bay in the standings and set the tone for a team on the edge.

Like Lillard, Nurkic played all eight seeding games with a heavy burden on his shoulders, especially with C.J. McCollum at less than full strength, and he did so having not played a single game since March 2019. While players around the league were resting minor ailments, the 7-foot Bosnian put his rehabbed broken leg to the ultimate test — and looked like he had not lost a step. His 22-10-3 line against the Brooklyn Nets on Thursday was wildly under-appreciated, and it was arguably his fifth-best performance in the bubble.

The Thunder could have easily slid in the West standings, with Dennis Schroder missing much of the restart, but Paul’s steady hand secured them a spot in the 4-5 matchup. Playing all seven games of OKC’s restart entering the final day of the regular season, Paul has averaged 20.8 points (on 49/40/97 shooting splits), 8.1 assists, 6.9 rebounds and 2.3 assists per 36 minutes in Orlando. But his impact goes beyond stats. The Thunder have been 23.8 points per 100 possessions better with Paul on the floor in the bubble.

Harden arrived late to the bubble, and it made no impact on his rhythm. It is as if he can stroll in from a day at the beach, change into a Rockets uniform and score 35 points on footwork and feel alone. The man is an offense unto himself. It can be monotonous to watch, but you have to give the man his due. With superstar teammate Russell Westbrook hampered by a hamstring injury, Harden rattled off back-to-back brilliant games to clinch a top-five seed, almost underwhelming given his season-long assault on offensive metrics.

It was a foregone conclusion the Nets were going to be bad in the bubble. Gone were Kevin Durant, Kyrie Irving, Spencer Dinwiddie, DeAndre Jordan, Taurean Prince and Wilson Chandler. That is a playoff rotation in the East. Brooklyn finished 5-3 in Orlando against a competitive schedule, retaining the seventh seed, and LeVert was the main reason. We knew he was good, but Thursday’s 37-6-9 in a shootout with a red-hot Lillard was a revelation. The question now is whether LeVert can be so brilliant alongside Durant and Irving.

Porter entered the bubble averaging 7.5 points as a rookie, hardly able to earn a spot in Nuggets coach Mike Malone’s rotation. Injuries forced Malone’s hand in Orlando, and Porter responded, elevating Denver’s ceiling in real time over the eight seeding games. During a four-game stretch when the Nuggets finished 3-1 and secured the No. 3 seed in the West, Porter averaged a 29-point double-double on 56/47/96 splits. Jamal Murray’s return forced Porter into a tertiary role, one that should make Denver more dangerous.

Like Porter, Jokic played each of Denver’s first seven seeding games. The guy had the coronavirus a month ago. Rumor had it he returned to training camp with less body fat, but he still looked to be an everyman, so much as a 7-foot Serbian with legendary passing skills can be. He posted a 30-12-10 triple-double in a win over the Thunder and nearly did it again in a victory against the Utah Jazz — the only two games on the Nuggets’ schedule against teams jockeying against them for the third through sixth seeds in the West.

Lillard entered the final day of the Western Conference race for the eighth and ninth seeds as a heavy favorite to capture Bubble MVP honors, but Booker had a chance to unseat him, had the Blazers star submitted a disappointing performance in falling out of playoff contention. That did not happen. Far from it. His 42 points (8-of-14 from three) and 12 assists (against one turnover) against the Nets were basketball god-like.

Booker was brilliant, albeit slightly less efficient, but the harsh truth is that Lillard’s effort rendered the Suns’ remarkable 8-0 run inconsequential beyond the excitement they gave us and the growth they experienced. Booker quelled concerns that his style of play could not serve a team in the bright lights of a playoff chase, but Lillard vaulted himself into a conversation about where he belongs on the all-time point guard pantheon.