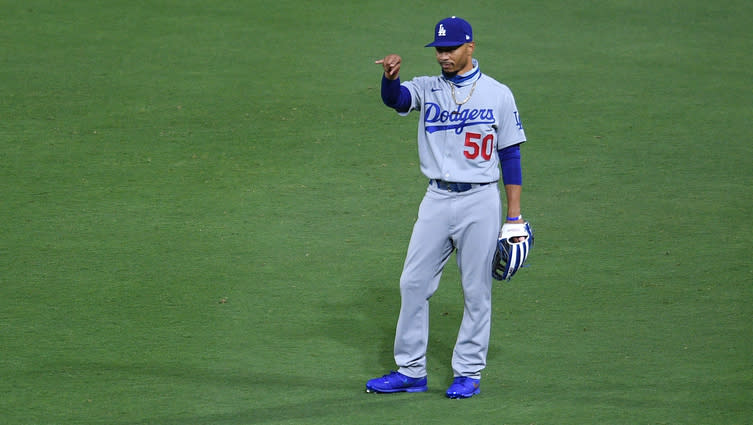 There are many reasons to rip the Red Sox, whom I described as a maggoty dumpster fire as recently as Friday.

Trading Mookie Betts isn’t one of them.

The former and probably future MVP made history with the Dodgers on Thursday night, delivering the sixth three-homer game of his career and his first outside of Baltimore. (That’s a joke, but man, did he murder the Orioles).

With the Red Sox slip-sliding their way to oblivion, the juxtaposition of Betts’ monster night with their own demoralizing 17-8 loss to the Tampa Bay Rays was hard to miss, but easy to mischaracterize.

In the short term, oh my God, what a horrific deal. Betts is going to win a World Series and the Red Sox are going down the toilet like a leg-twitching beetle. But in the long-term, the franchise will be better served by moving on from its homegrown star, because Betts’ window of dominance did not remotely fit Boston’s window of contention.

Perhaps it’s just my small-c fiscal conservatism talking, but I am philosophically opposed to 12-year contracts, no matter how talented the player. You’re buying more decline years than prime ones, especially in an era when fewer and fewer players maintain production into their 30s, let alone players of Betts’ profile.

Five-tool star Grady Sizemore saw his ascension halted at 25. Former NL MVP Andrew McCutchen delivered his last monster season at 28 and his last really good one at 30. Ask the Yankees how they feel about paying Jacoby Ellsbury.

Betts is a generational talent, but he’s only 5-foot-9. As we noted over the winter, players that size simply aren’t built to last, and if that sounds like some cold-blooded actuary bleep, so be it.

Since 1947, only seven players 5-foot-9 or shorter have compiled a career WAR of 50 or higher (compared to 125 for those 5-foot-10 or taller). Two were catchers (Yogi Berra, Pudge Rodriguez), one was a defensive whiz who couldn’t hit a lick (Luis Aparicio), and you tell me what to make of the other four.

Hall of Famer Joe Morgan remained an elite player until age 32, when he won his second MVP Award. He hit .254 over the final eight years of his career. Fellow Hall of Famer Tim Raines made his final All-Star team at 27 and topped 3.5 WAR just twice after age 30. We are already intimately familiar with the career trajectory of Dustin Pedroia.

That leaves Hall of Famer Kirby Puckett, a 5-foot-8 bowling ball who remained a force through his age-35 season before a tragic eye injury ended his career.

Betts is a unique athlete, so maybe he’ll break that mold, but I don’t blame the Red Sox for deciding not to take the risk. Were they stacked with the kind of talent that could contend right now, and blessed with a deep farm system to augment some of their higher salaries, then I would’ve made a case for retaining Betts anyway to capitalize on the 27-year-old’s prime.

But let’s be realistic about this window. There’s a reason John Henry and Co. replaced the win-now Dave Dombrowski with the win-someday Chaim Bloom. They saw the team for what it was, married to bad contracts like the oft-injured Nathan Eovaldi and Chris Sale.

They were lucky to get out from under half of David Price’s remaining bloat, but now they face the prospect of retooling pretty much every position except catcher (Christian Vazquez), third base (Rafael Devers), shortstop (Xander Bogaerts) and right field (Alex Verdugo). Do I even need to ask what difference Betts would’ve made on this train wreck?

Assuming Sale returns from Tommy John and Eduardo Rodriguez beats myocarditis, the Red Sox still are woefully inadequate in the pitching department, and after years of being strip-mined by Dombrowski, the once-prized farm system is beginning a long road back to viability.

Trading Betts makes clear their path forward. It provides the financial flexibility to attack multiple deficiencies, because no team boasts a limitless budget, not even Boston. Paying Betts $35 million annually to begin declining just as the Red Sox climbing back into contention would be bad business.

In the meantime, hammer away. Crushing the Red Sox is its own cathartic sport (I’ve got my varsity letter), and there will undoubtedly be more nights when the Red Sox fall on their face while Betts soars 3,000 miles away.

That doesn’t change the calculus that made him a bad long-term investment for Boston, which is why I firmly believe we will eventually look back at his departure as the right call.