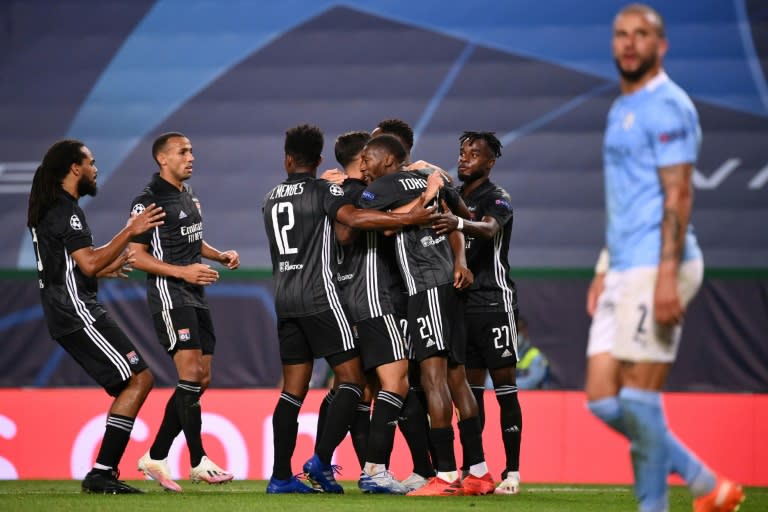 Moussa Dembele came off the bench to score two late goals as Lyon caused another Champions League sensation on Saturday, dumping out Pep Guardiola’s Manchester City with a 3-1 quarter-final win in Lisbon.

City had looked on course to come back and win the tie behind closed doors at the Estadio Jose Alvalade after Kevin De Bruyne’s goal midway through the second half had cancelled out Maxwel Cornet’s first-half opener.

However, Dembele put Lyon back ahead in the 79th minute and then capitalised on a shocking miss by Raheem Sterling to clinch the victory three minutes from the end.

Against all expectations, a team who finished seventh in the curtailed French season, and had played just two competitive games since early March, now find themselves through to a Champions League semi-final on Wednesday against Bayern Munich.

That, surely, will be a step too far for Rudi Garcia’s team but then again nobody expected them to eliminate Juventus in the last round, never mind knock out City here.

Guardiola’s team had been warned about Lyon, losing at home and then drawing away against the French club in last season’s Champions League.

But that was almost two years ago now and Lyon had lost several key players since then.

This, a day after Bayern’s 8-2 demolition of Barcelona, is a seismic shock and a hammer blow to the ambitions of City under Guardiola.

Their wait for European glory will go on, with this a third consecutive exit in the quarter-finals.

Guardiola was brought to the Etihad Stadium to deliver the Champions League, but he has not managed to equal the club’s best performance to date in the competition, a semi-final appearance in 2016, just before he was appointed.

And so, a year after Liverpool beat Tottenham Hotspur in an all-English final, there will be no English representative in the semi-finals in the Portuguese capital.

Instead both ties will be Franco-German duels, with Paris Saint-Germain facing RB Leipzig before Bayern meet Lyon in a repeat of the 2010 semi-finals.

Guardiola had set his team up with a three-man defence, as Fernandinho and Aymeric Laporte were joined by the young Spaniard Eric Garcia in the back line. Phil Foden dropped out of their line-up.

City created little in the first half and were caught out by a long ball over the top as Lyon took the lead.

Garcia raced back to tackle Karl Toko-Ekambi but Cornet was quickest to the loose ball and, with Ederson off his line, curled a low shot first-time into the corner of the net to keep up his remarkable record against these opponents — the wing-back scored three times against them in last season’s two meetings.

De Bruyne appeared the most likely to make something happen for City and threatened from free-kicks after the restart, as City turned up the heat following the introduction of Riyad Mahrez in place of Fernandinho.

The equaliser duly arrived in the 69th minute as Mahrez clipped a ball forward towards Sterling and he cut it back from the byline to De Bruyne, the Belgian arriving unmarked at the edge of the box to sidefoot home first-time.

Few would have bet against City going on to win the game from there. Lyon had offered nothing going forward in the second half and coach Garcia even decided to take off Memphis Depay, who had been anonymous.

But it proved an inspired decision as his replacement Dembele latched onto Houssem Aouar’s through ball to race through on goal and beat Ederson.

City expected the effort to be disallowed following a VAR review but the Dutch officials let it stand, and Lyon were back in front.

Still they should have been pegged back again, but Sterling somehow put the ball over with the goal gaping having been teed up by Ilkay Gundogan.

Lyon went straight downfield and sealed a famous victory as Dembele converted the loose ball after Ederson had saved from Aouar.