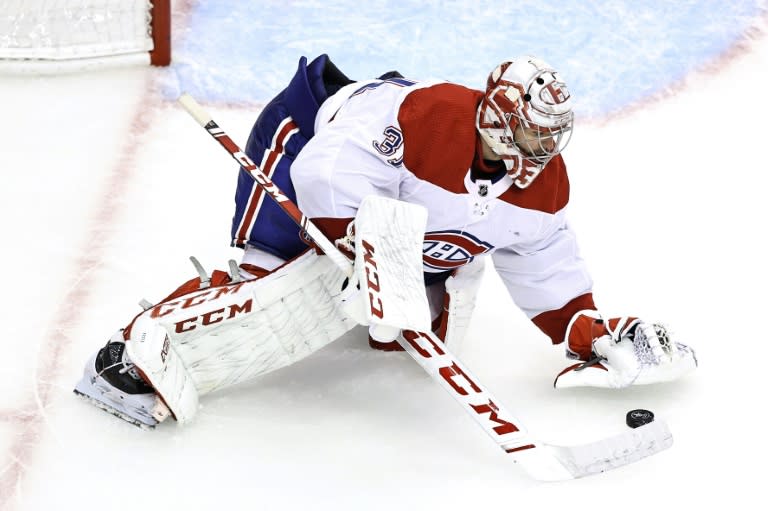 Montreal goaltender Carey Price made 30 saves as the Canadiens beat the Philadelphia Flyers 5-0 on Friday to level their NHL Eastern Conference playoff series at one game apiece.

Tomas Tatar and Jesperi Kotkaniemi scored two goals apiece for the Canadiens, who were guided in Toronto by assistant coach Kirk Muller as head coach Claude Julien returned to Montreal after having a stent placed in a coronary artery on Thursday.

Julien, who had been hospitalized because of chest pain, isn’t expected to return during the best-of-seven first round series, which is being played in the NHL’s Eastern Conference hub city as the league aims to crown a Stanley Cup champion after a coronavirus hiatus.

Muller said Julien “was one of the first guys to congratulate us on the big win.

“For Claude, I’m sure he’s listening, this win’s for you and your family.”

Philadelphia goalie Carter Hart allowed four goals on 26 shots and was pulled at 17:57 of the second period.

Montreal had taken control early against the top-seeded Flyers.

Tatar put Montreal up 1-0 at 1:02 of the first when he scored on the rebound of a shot by Brendan Gallagher.

Kotkaniemi made it 2-0 at 12:36, knocking in the rebound of a shot by Jonathan Drouin shot.

Montreal out-shot the Flyers 20-3 in the first 10 minutes, Philadelphia failing to get a shot on goal until 3:36 remained in the period.

“We got our butts kicked today in all facets of the game,” said Flyers coach Alain Vigneault, whose team hadn’t lost since play resumed after a months-long pandemic pause.

To make matters worse, Travis Konecny, who led the Flyers with 24 regular-season goals, departed in the third period after apparently taking a puck to his left ankle.

“There’s no doubt that Montreal’s will tonight to play the right way and to do the right things was much higher than ours,” Vigneault said.

“At this time of the year with the importance of the game, you don’t expect that.”

In Western Conference action in Edmonton, Bo Horvat scored his second goal 5:55 into overtime as the Vancouver Canucks defeated the reigning Stanley Cup champions St. Louis Blues 4-3 to take a 2-0 lead in their series.

The Blues’ Jaden Schwartz had knotted the score at 3-3 with seven seconds remaining in the third period when a redirection by David Perron went in off his leg.

Elias Pettersson had a goal and an assist, Tanner Pearson scored and Jacob Markstrom made 34 saves for Vancouver.

Ryan O’Reilly and Sammy Blais also scored for the Blues.

The New York Islanders and Colorado Avalanche also took 2-0 leads in their series, the Islanders downing the Washington Capitals 5-2 and the Avalanche holding off the Arizona Coyotes 3-2.

The Calgary Flames defeated the Dallas Stars 2-0 to take a two games-to-one lead in their Western Conference clash.