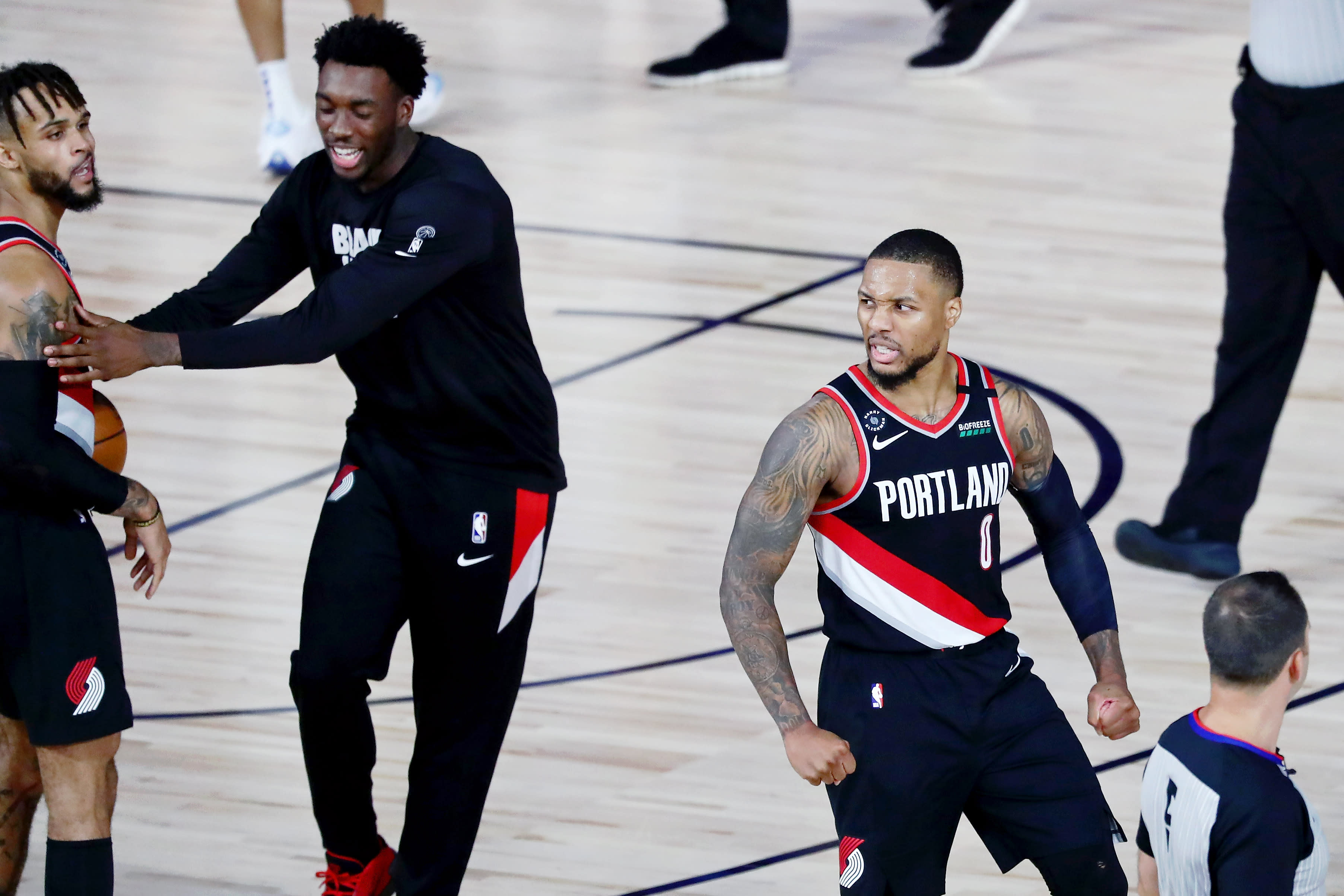 Carmelo Anthony stepped up, but what else would you expect from a guy headed for the Hall of Fame? CJ McCollum, in the throes of a brutal shooting night, while dealing with a broken bone in his back, made two clutch free throws at the end.

But it was all Damian Lillard again. And again, And again.

Sixty-one points, he scored. That was 10 more than he got Sunday in a narrow win over Philadelphia.

Over and over, Lillard kept his Trail Blazers in the game against the Dallas Mavericks, hitting shot after shot — the tremendous pressure of yet another must-win game seemingly not affecting him in the slightest. The result was a 134-131 win over the Mavericks that put the Trail Blazes in the driver’s seat for the West’s No. 8 seed and the prime spot in the play-in game(s).

We’ve seen this Damian Lillard before. In big games. But it doesn’t get older, it gets better.

“The magnitude of this game, even though it’s in an empty gym, in a bubble, the season was on the line and that makes it up there with the Oklahoma City game.”

Lillard marched into the same rarified air as legendary center Wilt Chamberlain as the only two players to have three 60-point games in the same season.

“First of all, I’m happy to be in that type of company — that’s an honor,” Lillard said. “I’m also happy that two of the three came in a winning effort. Tonight couldn’t have been better timing for that type of effort.

“It’s a pleasure and an honor to be in the company of Wilt.”

Portland struggled through another brutal third quarter, but still managed to take a five-point lead into the fourth period. But the final quarter was a serious slog through missed shots and fouls.

Portland didn’t hit a shot from the field until 6:13 remained in the game and committed 13 fouls in the final quarter. For a while, the only way the Trail Blazers got defensive stops was by fouling — and that didn’t help because the Mavericks were making their free throws.

Anthony tied the game with 2:23 to go with a three-point shot but Dallas pushed ahead on two free throws. Hassan Whiteside made two foul shots to pull Portland into a two-point lead, but Luka Doncic went one-for-two from the line with 40.2 seconds to go and the Blazers still clung to a one-point lead.

Lillard then missed a jumper, the Mavs gave it back on an offensive foul and McCollum went to the line with 3.9 seconds left and calmly drained two free throws for a three-point lead.

Tim Hardaway Jr. missed a tough fallaway from the left corner and Portland had a huge win.

McCollum has been playing with a serious back injury since last Thursday, but came up big when it counted.

That left Lillard, as emotional as you will see him, to take a tour of the media area courtside, his statement roughly translated as, “Put some respect on my name!”

And after that game, how could you not?