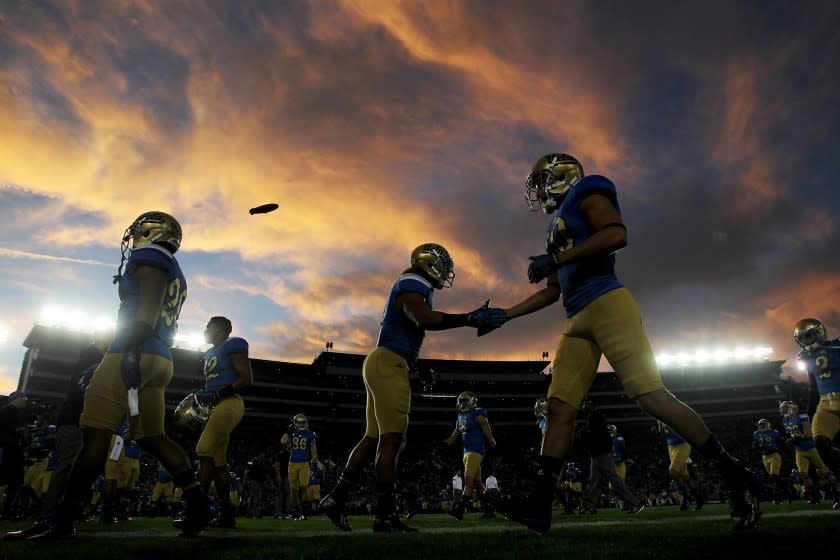 As he started to digest the dreadful news about a football season ending before it began, UCLA linebacker Bo Calvert wanted to know if there was a plan moving forward for the spring.

“What does this look like?” Calvert asked on a videoconference with his teammates and coach Chip Kelly. “Are we essentially pushed back six months from where we are?”

Nobody could provide answers.

The Bruins plunged headlong into further uncertainty Tuesday after a season that was already pushed back a month was halted when the Pac-12 Conference canceled all sports competitions through the end of 2020 because of the novel coronavirus pandemic. It will be the first time UCLA has completed a calendar year without playing football since the program began play in 1919.

“It sucks,” said Calvert, who like many of his teammates planned to remain on campus to continue workouts and attend classes virtually. “Nobody wants this to happen and nobody wants to have to deal with this type of thing, but the thing that separates guys in these situations is how you react moving forward and how quickly you’re able to change course and move forward in a positive way and I think we’ve got a lot of mature guys here who are able to realize that and understand that.”

Kelly said UCLA chancellor Gene Block, part of a Pac-12 CEO group that was unanimous in its vote to postpone the season, had informed coaches earlier in the pandemic that his “North Star” would guide him in his decision to protect athletes from a virus that’s not fully understood.

Kelly said “some real pointed facts” about COVID-19 emerged Monday night from the Pac-12’s medical advisory committee during a meeting that also involved coaches and athletic directors. At least 10 Big Ten Conference football players have reportedly developed a rare inflammation of the heart after contracting COVID-19, and Calvert said Kelly relayed concerns about possible heart issues associated with the virus to his team Tuesday.

“I don’t think everybody knows the long-term effects,” said Kelly, who recovered from the virus after contracting it in March, “and that’s why they hit pause today and there’s no guarantee that we’re going to move forward in January.”

Kelly said some players had lost family members to the virus and hoped that widespread rapid testing could become available by early next year, enhancing player safety and the likelihood that games could be played.

But there are lots of hurdles to clear before an opening kickoff. There remained no clarity on when a spring season might begin or how the logistics of trying to essentially cram two seasons into 12 months might work. Seniors and NFL prospects must decide whether they’d even be interested in playing in the spring after learning whether the NCAA would grant them an additional year of eligibility.

“It’s definitely a tougher pill to swallow for them just because of the unknowns,” said Calvert, who has completed two college seasons. “Are they going to pick up a minor and stick around for another year and a half of this or are they going to graduate and move on? That’s all personal decisions, but it’s a tough thing to talk about.”

Kelly said coaches were only allowed back on campus as of Monday and acknowledged doubts about whether his team would have been ready to begin the season previously scheduled for Sept. 26 given that they had not received clearance to begin practicing.

“I’m not sure we would have been able to do that,” Kelly said.

UCLA athletic director Martin Jarmond said the financial hit from a lost football season would be “significant” but stressed that his focus was on proceeding in the best interests of athletes who figure to have just freed up a lot of time over the next few months. Calvert said he would try to busy himself by finding a real estate or sports marketing internship.