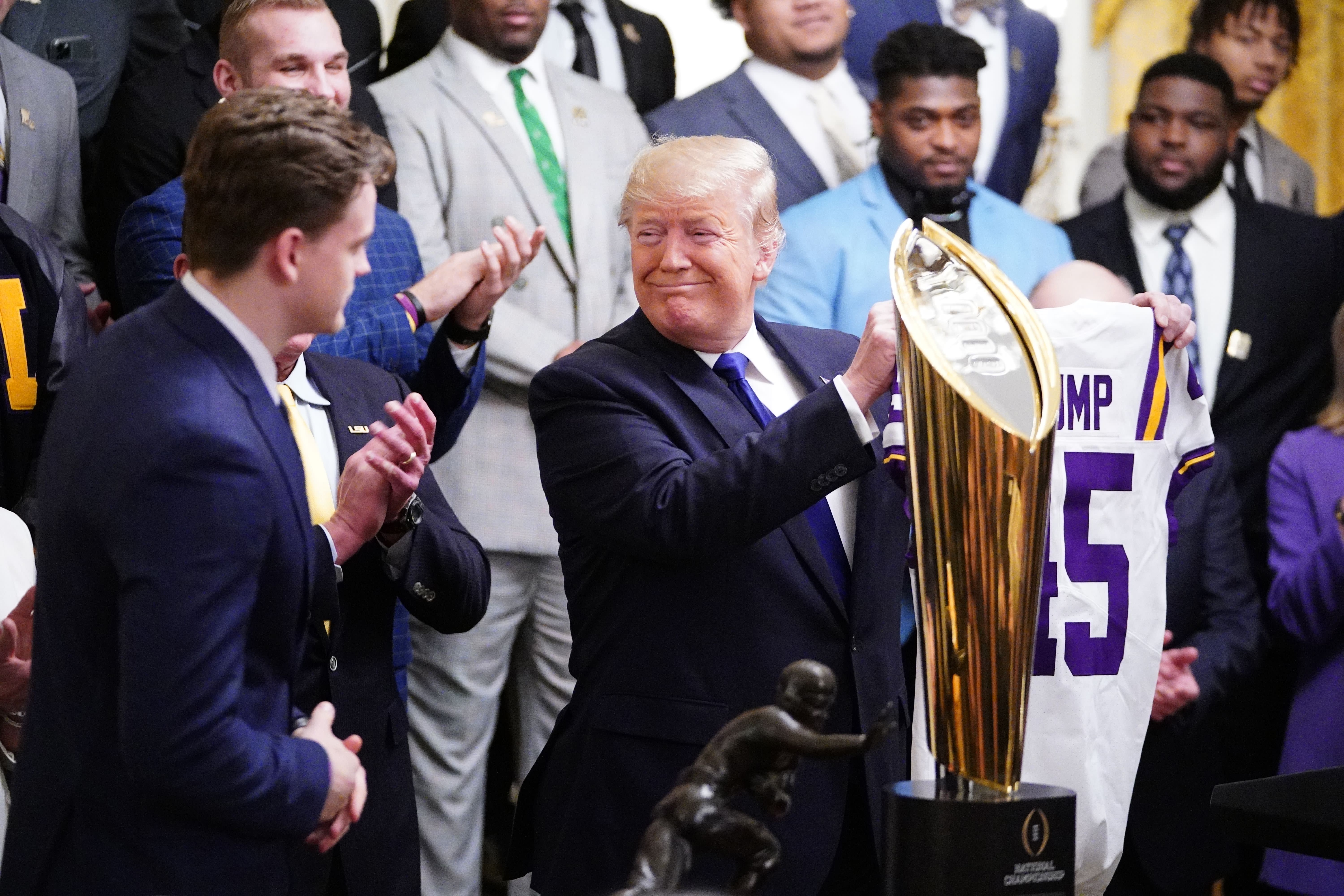 We’ve officially reached the point in the messy unwinding of the 2020 college football season where presidential intervention has emerged. There has been sniping, politicking and subterfuge, but the 2020 season crossed into a new Rubicon when a last-ditch effort to save the sport came from the White House.

On Monday afternoon, President Donald Trump went to Twitter to continue feeding his base. “Play College Football!” he tweeted out to his audience of nearly 85 million followers.

Earlier in the day, he tweeted in support of the #WeWantToPlay player movement spearheaded by Clemson quarterback Trevor Lawrence. Trump quote-tweeted the graphic the Lawrence-led player group put out Sunday night. Trump added: “These student-athletes have been working too hard for their season to be cancelled.”

This isn’t Trump’s first foray into college football. He appeared at three games in the final three months of the 2019 season, soaking in cheers in New Orleans at the College Football Playoff title game and attending two other marquee matchups – LSU vs. Alabama and Army vs. Navy.

Those were political layups. Showing he’s in favor of saving college football amid this specter of uncertainty appears to follow a similar theme.

Trump’s stances weren’t exactly hot takes. But his cry to college sports to play as football teeters on the brink of shutting down amid the COVID-19 pandemic signaled a new moment for the sport – the potential intersection of the lightning rod of presidential politics into the decisions expected to unfold this week.

“The tweets are significant to make people [around college sports] pause knowing how important Congress is to the future of intercollegiate athletics,” said an industry source familiar with conference politics. “In the red states, even more important are his followers.”

Until this point, Trump’s role in college football was a ceremonial one. He’d show up at games, bathe in the warm cheers of friendly crowds and then return to his regular schedule. Trump grew up in New York and attended Penn. While he’s a football fan and owned a USFL team, there’s no distinct track record of following college football.

The most impact Trump’s game appearances had was the occasional logistical headache. (That included thousands being stuck in driving rainstorms before the title game between Alabama and Georgia in Atlanta two years ago.)

It’s unknown if Trump plans to inundate college football leaders with tweets like he has done with the NFL in the past. He proved a disruptive force in that league throughout the saga of former 49ers quarterback Colin Kaepernick kneeling for the national anthem.

Trump politicized Kaepernick, intimidated the billionaire team owners who run the league and, generally, criticized the NFL publicly as a way to galvanize his base.

“Will this turn into his followers engaging with university presidents to not cancel football?” said the industry source. “It’s a potential big issue for him with an election coming up to be able to potentially say he saved college football. If he continues to act to say, ‘College football needs to be played in the fall,’ he has an election issue.”

As we’ve seen throughout this generation, political interference can have a great impact on the college sports landscape.

Think back to Virginia Tech riding the wave of political support to squeeze Syracuse out of the ACC in the early 2000s. Or recall the dueling politics of realignment a decade ago, when politicians were tripping over each other as new boundaries were drawn on the conference landscape. (West Virginia outfoxed Louisville for a spot in the Big 12 in 2011, which is the best thing that happened to Louisville once it received an ACC invitation in 2012.)

Don’t forget, too, that a main impediment to the Pac-12 luring Oklahoma and Texas back in 2010 was the fact it needed to lug both Oklahoma State and Texas Tech along with them. For a while this decade, covering college football required lobbying contacts.

Will it become that way again? No one is sure. But Trump’s re-election campaign needs some fuel in battleground states that happen to be Big Ten hotbeds – Pennsylvania, Ohio, Michigan and Wisconsin. The longer the league waits to make a decision, the opportunity to emerge as a Trump target grows.

The topic made its way to the White House media briefing Monday, where press secretary Kayleigh McEnany told the assembled media about Trump: “He very much would like to see college football safely resume their sport. As he mentioned in that tweet. A lot of these college athletes work their whole lives to get four years … they work their whole lives for this moment and he’d like to see them have a chance to live out their dreams.”

All signs point to multiple major conferences shutting down around college football this week. There’s confusion among players, uncertainty from the coaches and varied opinions from fan bases.

As the decisions are made in upcoming days, we’ll find out if college football will receive the same presidential scrutiny that the NFL did earlier from Trump’s White House.