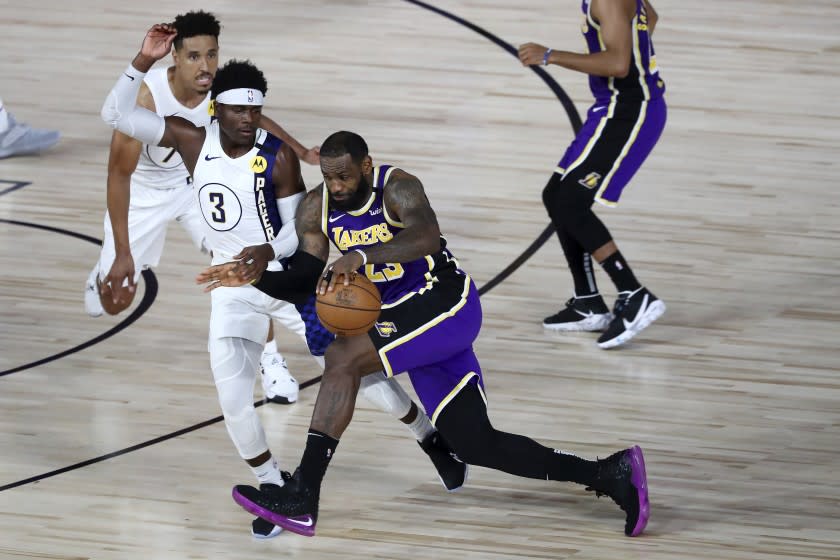 The hottest conspiracy theory in the NBA is that the Lakers’ rivals in the Western Conference are trying to help Portland become the eighth seed in the playoffs.

The Trail Blazers have been one of the more impressive teams in the bubble, with wins over Houston and Denver, and they nearly beat Boston, which is third in the East and has won 46 games.

So when Clippers coach Doc Rivers rested Kawhi Leonard on Saturday against the Trail Blazers, and then pulled his other star, Paul George, from the game with five minutes remaining and the Clippers trailing by three, eyebrows raised. Was this an attempt to throw the game to improve the chances the Lakers would have to see this tough team in the first round?

Rivers said George simply was on a minutes restriction and had reached his limit.

Then the coach was asked if he thought the Trail Blazers could beat the Lakers.

“I don’t get involved in that,” said Rivers, whose team beat Portland despite not having its stars in at the end. “I honestly don’t look at it. I heard our guys talking about it, I’m like, ‘Listen, that’s their business. Our business is who we’re playing.’ We need to focus on that.”

The Lakers also declined to engage in the conversation after their 116-111 loss to Indiana. LeBron James, who scored 31 points against the Pacers, said it was none of his business.

Coach Frank Vogel was asked about the Clippers’ decisions with their stars and how it could affect his team.

“I’ve got no problem with it,” Vogel said. “Everybody’s got to manage their team their own way.”

More on his mind is the management of his Lakers team, which lost its third game in a row since clinching the West’s top seed and dropped to 2-4 in the bubble.

Vogel has not played his expected playoff rotation yet and on Saturday evening he gave significant minutes to reserves Jared Dudley, Quinn Cook and Talen Horton-Tucker. Cook was the Lakers’ second-leading scorer with 21 points. Dwight Howard offered a late boost with 10 points and 12 rebounds.

“I obviously have to be better,” Davis said. “I had some good looks tonight. Just missed. Some shots around the rim — layups that I missed. Open threes — missed. Open midrange shot. Shots were just not going in.”

Vogel expects to continue experimenting with his lineups during the next two seeding games. He’ll wait until the break before the start of the playoffs to work on those rotations. By then he’ll also be closer to knowing which team the Lakers will face in the first round.

The Clippers’ win Saturday knocked Portland a game and a half back from eighth-seeded Memphis Grizzlies, and the Trail Blazers are only a half-game ahead of 10th-seeded Phoenix, which is 5-0 in the bubble.

Once the seeding games end, the eighth and ninth teams in the West will participate in a play-in game.

If the eighth seed wins, it advances to the playoffs. If the ninth seed wins, the teams play an elimination game.

And while the Lakers are paying attention to that race, on Saturday night they found reasons to feel optimistic about themselves.

Three observations on the Lakers:

— LeBron James is getting more comfortable with the oddities of playing in the bubble. He said after the game that he couldn’t remember the last time he played a real game in an empty gym — it didn’t even happen in high school.

— Talen Horton-Tucker has been earning more minutes in the rotation with his play. After scoring 10 points against Houston on Thursday, the 19-year-old rookie scored 10 against Indiana.