Mickelson fizzles on course, wows in booth at PGA 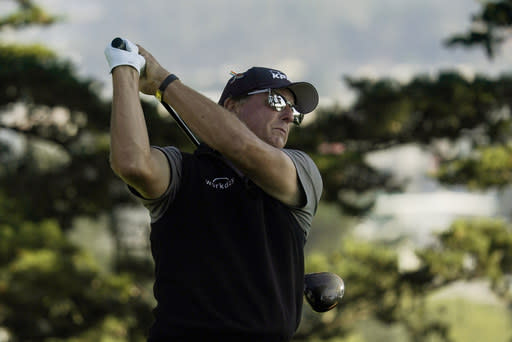 Phil Mickelson’s credentials were well-established by the time he settled into the broadcast booth during the third round of the PGA Championship.

And as a talker.

The five-time major champion joined Jim Nantz and Nick Faldo in the CBS booth on Saturday after the third round at TPC Harding Park. Barely making Friday’s cut at 1 over, Mickelson teed off early Saturday and was off the course – even par for the day – before leader Li Haotong teed off.

That gave him plenty of free time to kill.

Unlike Li, who returned to the range after taking the 36-hole lead, the 50-year-old Mickelson visited his friend Nantz in the booth in what may have been a tryout for his next career move. CBS says it spoke to Mickelson earlier in the week about joining the broadcast if the timing worked out.

”There’s three things I do well: play golf and talk golf,” Mickelson said, with the unspoken third item a bit of sexual innuendo that went over Faldo’s head.

But after that awkward beginning, Mickelson added a players’ perspective that even Faldo – a six-time major champion who hasn’t played regularly on tour in almost 20 years – couldn’t.

Li, Mickelson said, was one of the funniest guys on the tour. Matthew Wolff in his tie-dye shirt ”just looks cool to me, all-around cool,” Mickelson said, before getting into a technical breakdown of the 2019 NCAA champion’s swing.

Mickelson also shared some insight on what it has been like playing events without fans. The PGA Championship, which was rescheduled from May, is the first major tournament since the coronavirus pandemic shut everything down, including sports.

”We all miss it, we miss the electricity. That’s a big part of the fun of it,” said Mickelson, a fan favorite who often draws some of the biggest galleries on the tour. ”Some players like to feed off the energy in the crowd to help them, I certainly do.”

A notorious gambler, Mickelson’s analysis went awry when he started making predictions. When Jason Day had a long putt on No. 5 for birdie, Mickelson read the break and predicted that Day would make it.

”I want to see Jason take that 45-footer. I think he’s going to jar it,” Mickelson said.

Day left it about about three feet short.

As Li putted out for bogey on the par-4 fifth hole, Mickelson predicted it would be a wake-up call.

”This bogey right here is going to get Haotong from swinging conservative and tentative to getting after it, like he did yesterday,” Mickelson said. ”I think he’s going to birdie six and/or seven, and get this round turned around.”

Li then put his drive on No. 6 into the rough.

”So I’m 0 for 2 on my predictions. This announcing thing might not be my thing,” Mickelson said.

”We learn not to predict, Phil,” Faldo said gently. ”That’s the key.”

(Li did birdie No. 7, after Mickelson had left the booth)

Mickelson spent about an hour on the broadcast before taking his leave.

”Good luck tomorrow, and we’ll see you in the playoffs. We appreciate the visit,” Nantz said. ”It’s hard work, right?”