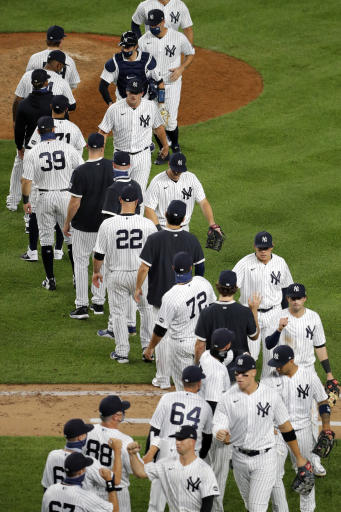 Judge homered for the third straight night, Jordan Montgomery cut up one of the league’s hottest lineups in his 2020 debut and the New York Yankees beat the Boston Red Sox 5-1 on Friday in their first home game of this coronavirus-shortened season.

Michael Chavis homered for Boston and Phillips Valdez impressed over 2 2/3 scoreless innings, but the club couldn’t overcome another poor start by Ryan Weber (0-2).

The Bronx hosted its first game amid growing concern that baseball’s plan to play through the pandemic may not work. Eight teams, including New York, have had their schedules interrupted over the first nine days of the season due to positive tests on the Marlins, Phillies and Cardinals.

Despite that growing anxiety – and the lack of fans – the Yankees tried to make pregame festive. Players lined up along the baselines for introductions, radio announcer Suzyn Waldman performed the national anthem with gusto from her booth, and both dugouts banged on kitchenware during a 7 p.m. cheer to recognize front-line workers battling the coronavirus.

There was also a moment of silence for late Yankees co-owner Hank Steinbrenner, who died in April. New York is wearing uniform patches with his initials this season.

Judge narrowly cleared the fence with a line drive estimated at 376 feet. Statcast projected the ball would have only been a home run in the Bronx and at Angel Stadium.

He also started the double play from right field, where he has his own cheering section for robe-clad fans that will be left unfilled this season. Judge caught J.D. Martinez’s sharp line drive in the third and picked off Kevin Pillar, who ventured too far from first base.

Montgomery (1-0) pitched 5 2/3 innings against a lineup that entered the day leading the majors in batting average (.276) and the AL in OPS (.783). The left-hander limited the Red Sox to a run, five hits and a walk with four strikeouts.

The 27-year-old Montgomery made just two appearances, one start, last season after recovering from Tommy John surgery. He returned this year with more speed and movement, particularly on his cut fastball.

Weber struggled for the second straight outing, allowing three runs in 3 1/3 innings after allowing six runs in 3 2/3 innings against Baltimore in his season debut.

Urshela connected off Weber for a solo drive in the fourth, and Gardner reached the second deck in right with a two-run shot in the eighth off Colten Brewer.

All-Star closer Aroldis Chapman has been cleared to return to Yankee Stadium following a bout with the coronavirus. Yankees manager Aaron Boone said he wasn’t sure when the hard-throwing left-hander would be ready for game action.

Waldman’s anthem performance was years in the making. During spring training in 2011, Waldman approached then-Pirates minor leaguer Gerrit Cole and predicted that one day, he’d sign with the Yankees. Cole retorted that if he did, Waldman would have to sign ”The Star-Spangled Banner” at his first home opener.

Cole – who signed a $324 million, nine-year deal with New York last December – tipped his cap to Waldman before she began singing Friday.

Retired left-hander CC Sabathia threw the ceremonial first pitch and bounced it to home plate. Sabathia said it was the farthest he’s thrown a ball since dislocating his shoulder on his final big league pitch last October.

”Just reinforces my decision to retire,” he said.

Yankees: RHP Tommy Kahnle was added to the injured list with forearm tightness. He had an MRI taken Friday and was scheduled to visit team physician Dr. Christopher Ahmad. Boone said Kahnle felt discomfort working out in Baltimore on Tuesday, then shut down a planned throwing session Wednesday. … RHP Masahiro Tanaka says he will wear a protective insert in his hat when he returns to the mound Saturday. Tanaka has been out since being hit in the head by Giancarlo Stanton’s line drive during New York’s first official preseason workout.