Bill Belichick has coached the New England Patriots for 20 seasons, and during that time, there has never been a real training camp quarterback battle. Drew Bledsoe had the job going into the 2000 and 2001 seasons. Tom Brady had it after that.

Technically the position, like all positions on the Patriots, was open. Reality was different.

Brady is now in Tampa, so don’t blame Belichick if he might enjoy, at least on some level, the concept of a QB derby heading into the season. For once he can say he doesn’t know who the Week 1 starter will be, and everyone has to believe him.

“We’ll give everyone an opportunity, and see what happens,” Belichick said Friday in his first public comments in months.

It’s the kind of quote Belichick lives to give.


UFC president Dana White addressed the media following Friday’s UFC Vegas 5 weigh-ins. He addressed everything from the whirlwind card changes for Saturday’s event, the potential location for Khabib Nurmagomedov vs. Justin Gaethje, Mike Tyson’s return to boxing, what he thinks will happen with Conor McGregor, and more.

Chief among White’s comments, however, were those directed at Dan Hardy and any other employee that confronts a referee, judge, or other official. 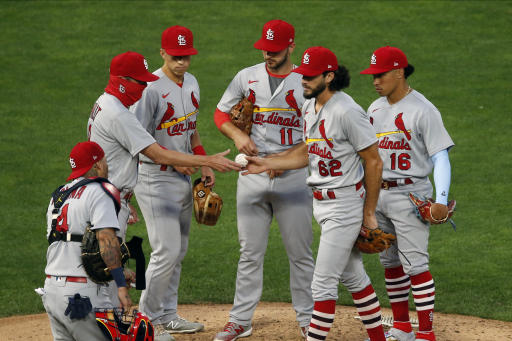 NEW YORK (AP) — The coronavirus forced another change in Major League Baseball’s schedule, bringing the league’s total to eight teams affected in the first nine days of the season.

Friday’s game between St. Louis and Milwaukee was postponed after two Cardinals players tested positive for the coronavirus.

The league announced the schedule change hours before the game was to be played. It said the postponement in Milwaukee is ”consistent with protocols to allow enough time for additional testing and contact tracing to be conducted.”

The Cardinals said in a statement that they learned Thursday night about positive tests from samples collected Wednesday...

Will Giannis, Bucks pick up where they left off?

The coronavirus pandemic halted the NBA season four months ago, the equivalent of an entire offseason. It is easy to forget where everyone left off, let alone what has changed since we last saw NBA basketball. In order to get you up to speed before the July 30 season re-opening slate at Walt Disney World in Orlando, we will be reviewing and previewing each of the 22 teams scheduled to participate.

How to Use Leaked Password Databases to Create Brute-Force Wordlists

To name just a few companies, VK, µTorrent, and ClixSense all suffered significant data breaches at some point in the past. The leaked password databases from those and other online sites can be used to understand better how human-passwords are created and increase a hacker’s success when performing brute-force attacks.

In other articles, we’ll cover generating wordlists for use in password-cracking. But here, we’ll learn how to create wordlists of statistical complexity and length based on actual passwords found in database leaks that occurred in recent years. Understanding how average, every-day people think about passwords will aid hackers during password-guessing attacks and greatly increase the statical probability of the success of the brute-force attacks.

Joe Kelly was suspended eight games by Major League Baseball on Wednesday after giving many baseball fans what they’d be waiting months for — vengeance against the Houston Astros after their cheating scandal engulfed the whole sport for the winter.

It was the Dodgers who lost to those 2017 Astros in the World Series. Even though Kelly wasn’t a Dodger then, he took up the cause of revenge Tuesday night when the Dodgers played in Houston for the first time this season. Kelly threw near the head of Alex Bregman and then taunted Carlos Correa after striking him out, causing the benches to clear.

MLB was none too pleased about any of it — particularly the lack of social distancing when the two teams spilled onto the field on the same day the league had to pause another team’s season bec...


Live Photos are a great way to relive moments beyond a simple still image since you get up to 1.5 seconds of video before and after the shot. Of course, your iPhone doesn’t just capture motion during a Live Photo — it also records audio. And that audio portion may not be something you want to share.

If you tend to share Live Photos when you have your Ring/Silent switch set to silent mode, you won’t hear any audio when you press down on the image to play it. Even with the volume all of the way up, Live Photos audio won’t play. You may never even notice that sound isn’t something you want to share. So this serves as a notice of sorts: unmute your iPhone and listen before sharing Live Photos!

Now, if you’re unhappy with a Live Photo’s recorded audio but still like the image, you can remov...

Brazil winger Willian has shaken off an ankle complaint to be fit for Saturday’s cup showpiece contest at Wembley against the Gunners.

The 31-year-old signed a short-term contract extension to cover a season elongated by the coronavirus shutdown, but that expires after Chelsea’s Champions League exploits.

Arsenal are understood to be one of the clubs monitoring Willian’s situation, while Chelsea have previously offered the long-serving Stamford Bridge star new two-year contract ...

LAKE BUENA VISTA, Fla. — Last week, as the NBA was gearing up for a historic season resumption after a four-month hiatus caused by the COVID-19 pandemic, President Donald Trump issued a warning on his Twitter account that kneeling during the playing of the national anthem would be a “sign of great disrespect” and added the game would be “over for me!”

Looking forward to live sports, but any time I witness a player kneeling during the National Anthem, a sign of great disrespect for our Country and our Flag, the game is over for me!

On Thursday, the opening day of the restart, all four teams that played — the Los Angeles Lakers, Los Angeles Clippers, Utah Jazz and New Orleans Pelicans — kneeled in solidarity around the “Bla...